The Darien Police Department has been getting “hundreds and hundreds” of calls from residents concerned about low-flying helicopters in the past week, says Sgt. Jeremiah Marron, a department spokesman. 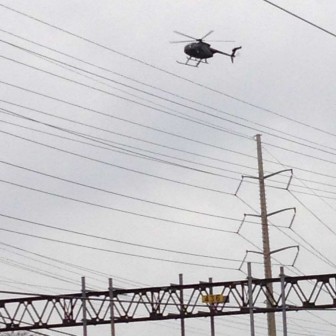 Darien police released this picture of a helicopter doing work for Eversource, the electric utility.

The choppers are surveying transmission lines with high-resolution cameras, according to a statement released by Eversource, formerly Connecticut Light & Power, and posted on the Internet by Darien Police. The project is “part of an ongoing effort to strengthen the power grid and increase reliability,” the utility said.

“Photographs collected during these flights will help build a more detailed record of structures, lines and other electrical equipment which will increase the efficiency of maintaining the electric system in Connecticut,” the statement reads.

The flights are expected to wrap up this week, Marron said. The utility statement said that for this week the helicopters will be flying as early as 7 a.m. and as late as dusk.

The chopper is also flying in Greenwich, Stamford, Norwalk and Westport.

Eversource added: “The helicopter assigned to this project is black with a registration number N175JL.”

In a statement posted by police on Facebook, the department said: “Please don’t call the Police Department to report it. Thank you.”