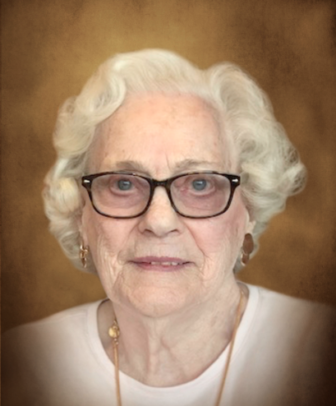 Louise Gockley, 94, passed away on Sept. 20. Visiting hours and her funeral will be held on Tuesday, Oct. 1.

She was a resident at Heritage Village in Southbury since 1998 before moving to Pomperaug Woods in 2012.

Louise was born in Boston on July 13, 1925 and was the daughter of Peter and Elidia Mazzola. Louise was raised in Quincy, Massachusetts and received her associates degree from Boston University. Later she attended the Katherine Gibbs Secretarial School.

Louise moved to Darien with her former husband, John Gockley, in 1958, where they raised their four children. In 1976, Louise returned to the workforce as a secretary/administrative assistant at Brinks Home Security in Darien.

Louise loved spending time with her family and friends and kept herself busy with various hobbies including sewing, crafting, knitting and playing bridge.

— an obituary from Carpino Funeral Home, where condolence messages may be left.

Louise is survived by her children: Nadine Gockley of Shelton; John Gockley and his wife, Charlene, of Lisle, Illinois; Paula Hessler and her husband, Keith, of Southbury; and Lisa Daus and her husband, Bob, of Westport. She is also survived by her six grandchildren: Stephanie, Steven, Cameron, Tyler, Brendon and Robbie; and one great-grandchild, Carter. Louise’s older brother, Arthur Mazzola, resides in Seattle.

Calling hours will be held from 3 to 5 p.m., Tuesday, Oct. 1 at the Carpino Funeral Home, 750 Main St. South, Southbury, followed by a funeral service at 5 p.m. at the funeral home. Private interment will take place in Dorset, Vermont.

Memorial donations can be made in Louise’s name to Luck2Tuck. Make checks payable to Luck2Tuck and mail to 605 Reservoir Road, Southbury, CT 06488.