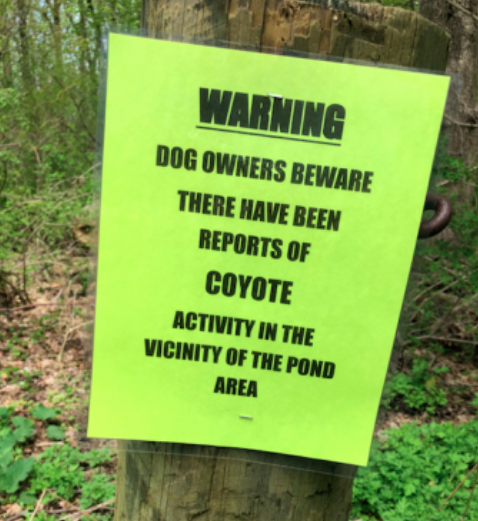 This sign was posted in Waveny on May 2, 2019. (Photo published with permission from its owner.)

Visitors to Waveny Park, just over the border from Darien in New Canaan, should be be especially vigilant in the area of the pond New Canaan Police are warning, after a coyote bit a leashed dog there last week. 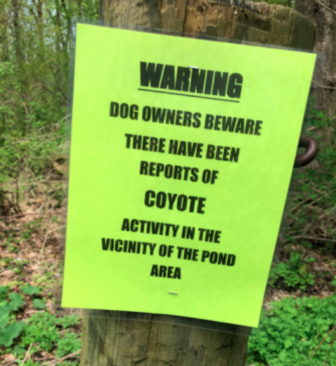 Visitors with dogs should avoid the area of Waveny Pond entirely for now, according to Officer Allyson Halm, head of the New Canaan Police Department’s Animal Control Section.

Halm said police had two calls Wednesday, about coyote sightings in the part of Waveny that includes the pond at the foot of the sledding hill, and that a witness to the biting incident on Thursday, April 25 reported it to authorities.

The coyotes likely have established a den near the pond, Halm said, and are protecting the territory.

“It should be a short-lived situation, but if people are going down this path, they should be with a walking stick or airhorn” to haze the coyotes, Halm said.

“I would avoid this area right now,” she said. She added that dogs off-leash are at high risk for a “serious encounter.”

“My bigger concern is that they [coyotes] are protecting this part of Waveny and it’s going to happen again,” Halm said. 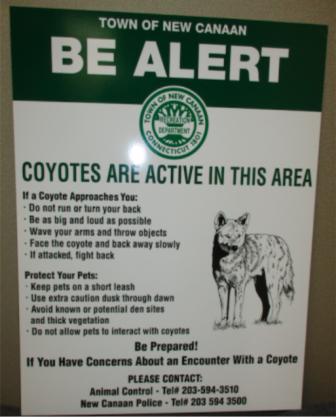 This sign already is posted along a trail that runs behind Waveny Pond and past the cornfields area.

Coyotes are not a threat to humans, though they can perceive threats in dogs, Halm said.

Recreation officials have posted a warning near the pond about coyote activity.

One of the Waveny visitors who reported a coyote sighting Wednesday saw a coyote follow her and her dog from a distance away as they walked on a trail that runs near the Merritt Parkway, Halm said. The behavior is referred to as “escorting,” where a coyote is “keeping an eye on who is around them and will follow until they feel the den is no longer at risk.”

“This is why people should always carry an air horn or strong whistle, using it as they continue to walk away from the coyote and why we posted the parks,” Halm said.

In the case of a coyote actually biting a dog, Halm recommends a booster shot from a veterinarian and a period of home confinement.

One thought on “Leashed Dog Bit by Coyote at Waveny Park: Police Suggest Keeping Dogs Away from Pond Area”