Meet and sing along with characters from New Paradigm Theatre’s upcoming production of Disney’s “The Little Mermaid” – and learn how marine debris affects the real creatures of the ocean realm – during “Under the Sea Saturday” on June 25 in The Maritime Aquarium at Norwalk.

Children are encouraged to come dressed as their favorite princess, prince or pirate for this special day. Highlights at the Aquarium on June 25 include three sing-alongs and meet-and-greets with the cast, a scavenger hunt and more.

— an announcement from The Maritime Aquarium.

Meet and sing along with Ariel (Sydney Rose Horowitz) and other cast members of the New Paradigm Theatre’s summer production of Disney’s “The Little Mermaid” on Saturday, June 25 at The Maritime Aquarium at Norwalk.

As The Maritime Aquarium continues to incorporate the arts into its exhibits and educational programs, it is partnering with the non-profit theater company for its 2022 production of “The Little Mermaid,” with the theme of “Recycle, Repurpose and Reuse.”

Teen and adult board members of the theater company have joined the Aquarium’s teen volunteers this spring for beach cleanups that — in addition to cleaning the environment — have collected items used in “Little Mermaid” costumes and sets.

For “Under the Sea Saturday,” Aquarium guests can sing along during performances by Ariel, Prince Eric, Ursula, mersisters, eels and other characters at 10:30 a.m., noon and 2:30 p.m. in Newman’s Own Hall. After each performance, they can meet the cast and pose for photos. 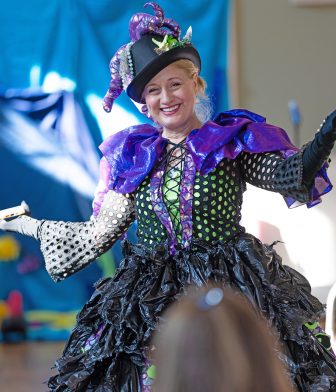 Kristin Huffman, artistic director and program coordinator of the New Paradigm Theatre Co., will perform the role of Ursula on June 25 during sing-alongs of Disney’s “The Little Mermaid” at The Maritime Aquarium at Norwalk.

Young guests also can go on a scavenger hunt throughout the Aquarium looking for the real live animals represented in the popular animated movie and Broadway musical, such as a crab, eel, octopus and sea horse.

Plus, everyone can learn about the issues created by marine debris — and what we all can do to help — from teens participating in the Aquarium volunteer program called ECHO (Education Conservation Heritage and Outreach).

The New Paradigm Theatre will present Disney’s “The Little Mermaid” on Friday, Aug. 19 (at 7 p.m.) and Saturday, Aug. 20 (at 2 and 7 p.m.) in the state-of-the-art theater of Black Rock Church in Fairfield. Show tickets will be available for purchase during the Aquarium’s “Under the Sea Saturday.” Or purchase them at www.nptheatre.org.

Learn more about “Under the Sea Saturday” on June 25 and reserve your Aquarium tickets at maritimeaquarium.org/mermaid.