Sharad Samy, in his keynote speech at Darien’s Memorial Day ceremony on Monday, asked his listeners to remember what the red, white and blue of the U.S. flag stand for and to “Remember those who gave their lives for us today.

“Remember that they were just like you and me,” he told the crowd of about 200 people at the veterans’ burial ground in Spring Grove Cemetery. “Remember that they gave what we all treasure the most — life — so that you and I can enjoy our great nation each and every day.” And he described several of them who were cut down in wars from the American Revolution to Vietnam.

He explained the symbolism of the flag’s colors: “the red stands for heartiness and valor, the white stands for purity and innocence, and the blue stands for vigilance, perseverance and justice. […]

Samy, a town resident, is a major in the Army National Guard, a former member of the town Board of Assessment Appeals and an active member of Darien VFW Post 6933.

Good morning. I’d like to thank the Monuments and Ceremonies Commission for the great honor of being able to speak with you today. 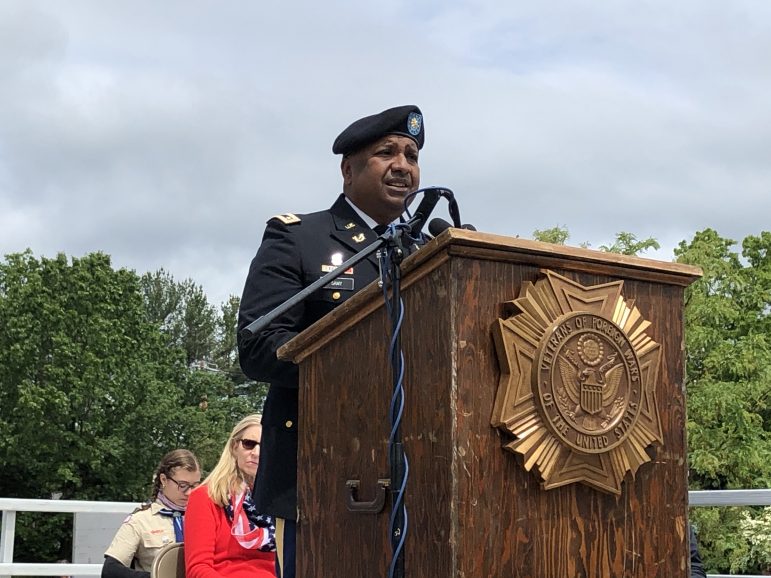 We’re here to honor those who have died in the service of our nation and for each of us here. This group includes women and men, adults and children from all ethnicities and all backgrounds.

It’s easy, as with so many different symbols, to call them heroes and end it there. But what makes these people extraordinary and brave is that they were ordinary people, like you and me. They had the same fears, the same doubts, the same hopes and the same convictions. They all feared death, but they did their duty to the best of their ability, and they sacrificed their lives so that each and every one of us could have the opportunity of a good life.

I’d like to tell you about some of those heroes:

Gideon Weed was a 19-year-old kid who got to see the American Revolution first-hand. He died fighting for our freedoms against the British on Aug. 2, 1781, falling around where the Hindley Elementary School sits today.

James Jones of Darien was supposed to become a blacksmith, but he was a sailor at heart, and he served on merchant vessels throughout most of his young life. He died at the age of 35 as a prisoner of war on a British ship off the coast of England during the War of 1812.

Horace Curtis was a 24-year-old farmworker from our town. He was declared missing and presumed dead after the first Battle of Bull Run on July 21, 1861, just at the start of the Civil War.

And Capt. Isaac Hoyt, a 44-year-old farmer from Ox Ridge, died in March 1862 from typhoid as a prisoner off the coast of North Carolina.

On Dec. 7, 1941, at Pearl Harbor, Lt. Eric Allen, a Navy fighter pilot from Noroton Avenue, and Ensign William O’Neill Jr. on board the U.S.S. Arizona, from Stanley Road, were both killed in action.

Two students of the Darien High School Class of 1940, Elton Barrett of the Post Road, and Rosario “Bobby” Palumberi of Noroton Heights, fought and fell in World War II, both dying in 1944. Signalman Third Class Barrett died in the South Atlantic when his ship, the S.S. Robin Goodfellow, was torpedoed and sank. Bobby Palumberi in the Army, was injured both in North Africa and in Italy, and he died of wounds in Casino, Italy.

Marine Corporal Julius Caeser Nacci was 20 years old when he died on Oct. 27, 1950 in Wonsan, Korea. He’s fondly remembered for playing his harmonica at boot camp in Parris Island during a damp day at Camp Lejuene, when the fields around the barracks were flooded, he ran fast and belly jumped into the water, sliding across the grass, much to the delight of his comrades.

His platoon was overrun by an advancing North Korean unit that moved so quickly and with so many people that 10 of corporal Nacci’s platoon were killed while they were sleeping in their sleeping bags.

In this field, U.S. service people that have fought in the Civil War, the Indian wars, the Mexican border skirmish, the Spanish-American war, the Philippine Insurrection, World War I, World War II, Korea and Vietnam.

There are people here from other armies that fought with us. Veterans from Canada, Great Britain, Italy (the First World War), Australia, the Philippines, Brazil, Czechoslovakia, Poland, France, Belgium and Vietnam.

There are men and women here, couples who were both in the service. And one of those buried here was just 14 years old when he earned the Congressional Medal of Honor.

Remember what these symbols mean — especially today, but every day. And remember what our flag represents: The stripes are for our 13 original colonies, who dreamed and aspired of a better government, and a better world. The stars are for each of our glorious states, each so very different, but each so very important to the others.

And remember what the colors represent: the red stands for heartiness and valor, the white stands for purity and innocence, and the blue stands for vigilance, perseverance and justice. Think about that for a moment.

That is what the red, white and blue represent. More than just colors to wear on your clothes. And think about what the opposite represents: weakness, cowardice, corruption, cynicism, fickleness, neglect and injustice. These are not the principles on which our great nation was founded, and those are not the qualities that we should strive for as citizens.

Remember that some people do use these symbols out of convenience or correctness, but I ask each of you to remember: They’re worthy of more than sound bites, Instagram messages or Twitter tweets. They are symbols that define who you are as an American. They are also symbols that should remind you every day to be more than you are. To be more than you even think you can be. Be the heroes that the fallen are.

In conclusion, I would like to read you a poem written from World War I. It is “In Flanders Fields” by John McCrea:

In Flanders fields the poppies blow
Between the crosses, row on row,
That mark our place; and in the sky
The larks, still bravely singing, fly
Scarce heard amid the guns below.

We are the Dead. Short days ago
We lived, felt dawn, saw sunset glow,
Loved and were loved, and now we lie,
In Flanders fields.

Take up our quarrel with the foe:
To you from failing hands we throw
The torch; be yours to hold it high.
If ye break faith with us who die
We shall not sleep, though poppies grow
In Flanders fields.

Remember these symbols for what they are today and every other day and never forget them. For if we break faith with them and what they fought for, we will truly be lost.

From the Darien Monuments and Ceremonies Commission announcement that Samy would be the keynote speaker:

Sharad served in the U.S. Army Reserve from 1997-to-2008 as a Major and Judge Advocate in the Bronx and Germany. 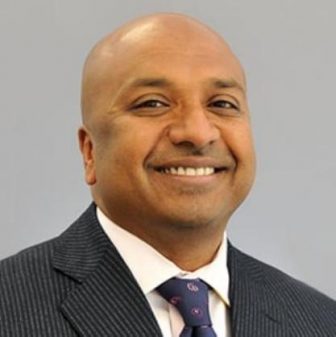 He deployed to Djibouti, Africa in connection with Operation Enduring Freedom, and settled death claims and advised on humanitarian relief operations in the Horn of Africa. Sharad currently serves as a major in the Connecticut National Guard.

Sharad currently serves as general counsel to The Common Fund for Nonprofit Organizations, which provides stewardship and investment management of funds of education organizations and other non-profit organizations.

He is a board member for the Karam Foundation, which helps Syrian refugees, both here and abroad.  Sharad serves on the Board of Directors for Lawyers for Children of America, which provides pro bono legal counsel to children in neglect and abuse cases.

He is also a a trustee for the Connecticut Department of Veterans Affairs and serves on the Community Engagement Board for the state Division of Criminal Justice.

Locally, Sharad served on the town Board of Assessment Appeals from 2012-to-2017.  He is an active member of Darien VFW Post 6933, and volunteers in local Wreaths Across America fundraising.

Sharad and his wife Katherine are proud to be both naturalized citizens and Darien residents.  They are parents to three lovely children.