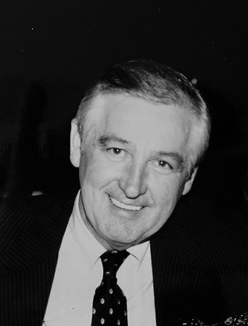 John “Jack” Graham, a World War 2 veteran who flew 40 combat missions as a B-24 bombardier and went on to become a long-time cement-industry executive, died Friday, Aug. 18, in Darien. He was 95.

Mr. Graham, who lived in New Canaan for nearly 40 years, passed away of natural causes in his sleep at Maplewood Senior Living, where he had resided with his wife of 67 years, Marion Graham, since late 2014.

A 1949 graduate of Boston College where he played football and hockey, Mr. Graham began his long career in the cement industry in the early 1950s and retired in 1998 as president of LoneStar Cement to start a consulting business.

He also served as president of Flintkote Cement Co. and vice president of Atlantic Cement Co., both based in Stamford. At the time of his death, Mr. Graham was a member of Boston Sand & Gravel’s board of directors.

Mr. Graham also was a well-regarded member at Woodway Country Club, Westchester Country Club in Harrison, N.Y., and Congressional Country Club in Bethesda, Md. An excellent golfer who once aspired to play professionally, he also found time while raising six children to become the Green’s Chairman at both Westchester and Woodway.

Mr. Graham was born in Canton, Mass., on July 3, 1922, the fourth of five children. His parents, John Graham and Margaret Leonard, were English-born offspring of Irish-born parents, who came to the Boston area from in 1912 with other family members and friends to work in the many textile factories dotting the region.

Eventually, Mr. Graham’s parents moved to Canton, where he would later captain Canton High School’s varsity baseball and football teams. Moreover, during this time, he fell in love with the game of golf, practicing most days in the cow fields near his home. Ever the natural athlete, Mr. Graham excelled as a long-distance runner as well.

However, even a possible running scholarship from Boston University was not enough to overcome Mr. Graham’s strong sense of patriotism and duty in the summer of 1940 after graduating high school. He turned down B.U, expecting to enter the U.S. military as Germany and Japan waged war around the globe.

Soon after the U.S. declared war on Japan and Germany in late 1941, Mr. Graham and some friends decided to enlist with the U.S. Navy rather than wait to be drafted. Without his parent’s knowledge, at 19 years old he was accepted into the Navy’s pilot-training program even though 21 was the minimum age requirement. But his parents refused to give their consent, despite lobbying from the Navy.

Mr. Graham entered the U.S. Army in the fall of 1942 and was accepted into the Army Air Corp’s aviation program to become a bomber pilot. But to his dismay, Mr. Graham and his classmates were selected to be bombardiers using the newly developed and top-secret Norden bomb site, a precursor to analog computers.

Mr. Graham was matched up with nine other service members and given a B-24 heavy bomber; they dubbed “Pretty Baby” in early 1944. Assigned to 403rd Squadron of the 5th Air Force’s 43rd Bomb Group, Mr. Graham would go on to take part in 40 bombing missions against the Japanese in New Guinea, the Philippines, Borneo, Taiwan and other South Pacific islands. He was back in the Boston area when he heard the Japanese had surrendered in September 1945. Mr. Graham’s service allowed him to enter Boston College on the G.I. Bill.

Mr. Graham was a man whose unwavering strength and commitment to his love of family and his Catholic faith shaped his daily practice of kindness, integrity and optimism. He was a role-model for his children and grandchildren, serving as a template to achieve a “life-well-lived.”

The family will receive friends from 4 to 8 p.m., Thursday at the Hoyt Funeral Home, 199 Main St., New Canaan.

In lieu of flowers, contributions may be made to the Woodway Scholarship Fund at 540 Hoyt St., Darien, CT 06820.