Jeff Brameier, a lacrosse coach at Darien High School for decades, will talk at the Darien Men’s Association meeting on Wednesday, Nov. 14 on “The Importance of Athletics in High School.” 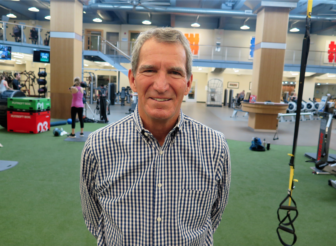 Jeff Brameier, longtime lacrosse coach and coach of other sports in Darien, at Chelsea Piers Connecticut, where he is director of the field house.

Athletics have been a mainstay of the high school scene for decades. Today, the field has vastly expanded, giving an ever greater variety of competitive options to both male and female students.

While students get involved in high school athletics for the sheer love of the game, there are significant benefits from these extracurricular activities.

The discussion will focus on the experiences Jeff has drawn on from his 40-plus years of coaching at the school. He was raised in Darien.

He heads into his 36th season at the helm of Darien High School boys lacrosse program, where he has guided his teams to a win-loss record of 594-133 (.818), winning 17 FCIAC League Championships, 13 State Championships, including six in a row from 2005-2010.

His team was ranked the No. 1 public school team in the country in 2014 and 2017. He has coached 91 high school All-Americans, 175 High School All-State players, 14 Connecticut Players of the Year and has been named Connecticut Lacrosse Coach of the Year five times.

He was National Coach of the Year in 2014 and was inducted into the Connecticut Lacrosse Hall of Fame in 2011. He has been president of the Connecticut High School Lacrosse Coaches Association for the last 31 years. In the past, he also has coached the Darien High School football and swim teams.