Harriett Bell Corrigan passed away Aug. 28, 2019, at Sunnyside Manor in Sarasota, Florida one day after her 92nd birthday. 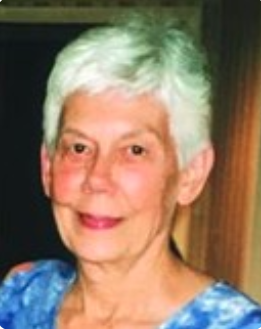 Harriett Corriganl 92, passed away on Aug. 28. Her memorial service will be on Sept. 26.

She and her husband William (Bill) Thomas Corrigan moved to Sunnyside from Venice, Florida in 2006. He passed away in 2009.

Harriett was born Aug. 27, 1927, to Ernest and Muriel (Graham) Bell in Bridgeport, and was raised in Riverdale, Maryland. After graduation from Hyattsville (Maryland) High School, she took lessons to secure a pilot’s license but said she did not complete the course because “the flight instructor was interested in more than just teaching me to fly.”

She then worked to be a registered nurse and received a bachelor’s degree in nursing from American University / Sibley Hospital in 1949.

She and Bill met at AU and were married in 1951. During the 50s and 60s, she was a homemaker and mother, raising two sons. She was adept at juggling the changes inherent to Bill’s career as a producer and executive in television news that not only kept him away from home often but also included six relocations in nine years (Los Angeles, New York and Washington, D.C.).

— This obituary previously was published by the Herald-Tribune

In 1975, she authored Cooking With Conscience, a cookbook featuring 52 meatless menus. A concept well ahead of its time. She was an avid reader, traveler, and a believer in lifelong learning.

Always considerate and thoughtful, Harriett had a strong social and moral compass which saw her active with programs like Person-to-Person, a social outreach of St. Luke’s Church in Darien.

Upon Bill’s retirement, they moved to Venice, Florida, where she was active with the St. Mark’s Church Altar Guild and, as a member of the Venice Yacht Club, helped create and manage a youth sailing program for over 20 years.

Harriett had a terrific sense of humor that brought smiles throughout her life. One example of her quick wit was the time her eldest son, Kevin, called to report that her five-year-old grandson, Sam, had tested very high in IQ. Kevin bragged that he was a “chip off the old block.” Harriett quickly responded, “Oh no, Kevin … in our family, it skipped a generation.”

Remembrances may be emailed to cavein@me.com. Harriett suggested that in lieu of flowers, memorial donations may be made to the National Audubon Society, 225 Varick St., New York, NY 10014.

Harriet is now with Bill and Christ in peace. We celebrate that we are all so much better people for having had her in our lives.