Greens Farms Academy girls and boys soccer, field hockey and volleyball teams all left the field unbeaten this past week, with Darien athletes helping with the wins.

Here’s a look at last week’s results, with Darien players mentioned in dispatches in boldface: 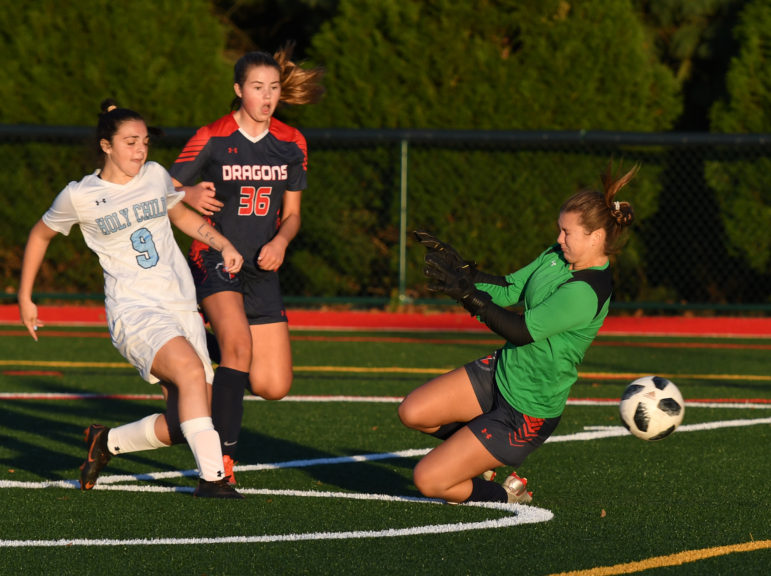 Kimball scored twice, once of an assist from Annika White (Southport), as the Dragons wound up tying Holy Child by a 2-2 score later in the week.

Murphy had five saves for GFA, which outshot Holy Child by a 27-8 count.

Zoe Koskinas (Fairfield) and Keely O’Shea (Darien) each scored one goal and assisted on the other as Greens Farms Academy edged Hopkins 2-1 in an FAA thriller at home on Wednesday.

Koskinas set up O’Shea for the first goal of the game before scoring off an O’Shea set up later in the first half.

Nikki Farber (Westport) made five saves for GFA, who had 18 penalty corners and peppered the Hopkins goalie with 24 shots.

Koskinas’ overtime goal from an O’Shea assist sparked the Dragons to a 1-0 win over Suffield Academy on the road on Saturday.

Farber notched her fifth shutout of the season in the win.

GFA competed in the second FAA dual meet of the season and the Dragons run away with three boys wins and four girls victories at SUNY-Purchase.

The Dragons raced out to a 7-2 halftime lead and never looked back in defeating Forman by a 9-5 count at home on Wednesday.

Josh Kitt (Norwalk) netted two more goals for GFA while Will Whelan (Fairfield) had two assists for the Dragons, who improved to 3-4 with their third straight win.

In goal, Yates and Ryan Buzzee (Norwalk) each had a single save while Spencer Henske (Westport) had three saves while splitting duties.

Sammy Freeman (Shelton) had 12 kills and two blocks to lead Greens Farms Academy to a 3-0 win over Westover on Wednesday.

Bernstein had seven kills while Freeman added four and Lind had three for the Dragons. Mooney had six assists with Nesi adding four more.

Nesi also had six aces while McCormick and Mooney had four aces each.