During the workshop, members of the Tanzania National Anti-poaching Task Force spoke about Tanzania’s success story in combating poaching and wildlife trafficking and shared valuable lessons with the newly created National Task Force on wildlife crime in Uganda.

Participants included 30 key representatives and law enforcement officers from the National Task Force on Wildlife Crime in Uganda; LATF; Robert Mande, chairman of the National Anti-poaching Task Force of the United Republic of Tanzania; and GFF.

The workshop is the latest in a series convened by GFF locally and globally to provide expert training to officials with the goal of dismantling transnational organized crime syndicates and combat poaching and illegal trade in wildlife.

Multi-agency training sessions in 2019 and 2020 have engaged a number of member countries of the African Union, including Angola, Botswana, Lesotho, Malawi, Mozambique, Namibia, South Africa, Tanzania, Zambia, and Zimbabwe. 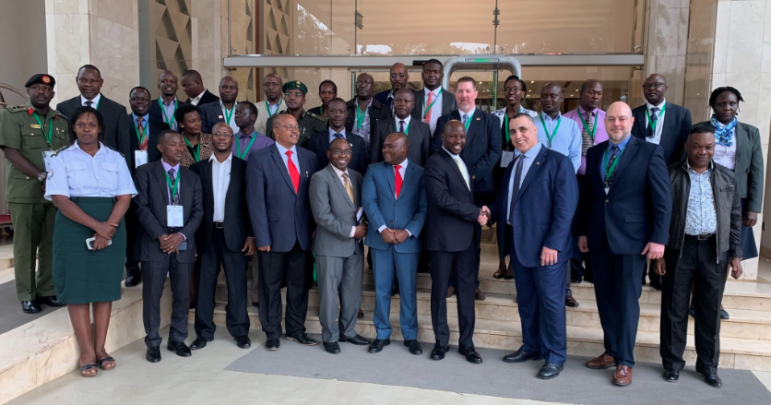 “The collaborations we established this week have strengthened the National Task Force on Wildlife Crime in Uganda and will ultimately lead to new transnational investigations and prosecutions that will help end wildlife trafficking.

“LATF has the mandate to operate across borders working with national law enforcement agencies to combat wildlife crime. We are delighted by Uganda’s unwavering resolve to conservation which has been reinforced by the creation of the Task Force that will spearhead prosecution led investigations in the fight against wildlife crime in the country and beyond,” said Edward Phiri, LATF director.

Wildlife trafficking generates more than $10 billion a year for transnational organized criminal networks. GFF’s Justice and Nature Initiatives have collaborated and partnered with governments and task forces in multiple African and Asian nations to  provide law enforcement training to end this crime.

With Grace Farms as the nexus for convening the public and private sectors, NGOs, and government agencies, the aim of the Grace Farms Foundation’s Justice Initiative develops comprehensive strategies and partnerships to combat all forms of contemporary slavery, wildlife crime, and gender-based violence.

Through an interdisciplinary approach, Grace Farms Foundation’s goal is to make sustainable advancements in these areas through effective training, policy, and advocacy.

The foundation carries out its work through the publicly available facilities and integrated programs of Grace Farms, an 80-acre property owned and operated by the Foundation.

Grace Farms was established as an essential platform for the Foundation, serving as a welcoming place where individuals, not-for-profit organizations, and government entities come together to collaborate for the common good.