George Blackwell Cammann died peacefully on Tuesday, Aug. 15 at home. He was 91. 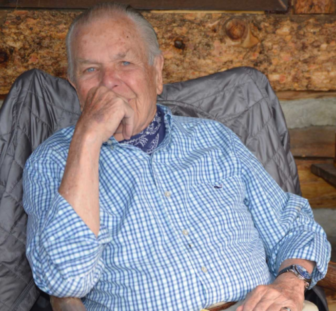 George was born on Jan. 27, 1926 in New York City to Katharine Blackwell and Frederic Almy Cammann.

After attending St. Marks School, he served as a Navy corpsman during World War II, and graduated from Cornell University (BMA ’50). George spent the majority of his career at Pan American World Airways and a decade at Northwest Airlines. Upon retirement, he volunteered at IESC and Norwalk Hospital.

He actively served in the life of Noroton Presbyterian Church, including singing with his strong tenor voice in the choir in his later years. A member of the Tokeneke Club in Darien for 55 years, George was an enthusiastic competitor in his Sunfish on Long Island Sound or on the tennis courts.

Equally at ease on alpine or nordic skis, George was noted for his skilled horsemanship at Elkhorn Ranch South in Arizona and Elkhorn Ranch Montana. His greatest pleasure came with good friends and tight lines fly fishing at Megantic, Potatuck, and on the Gallatin, Madison and Yellowstone rivers.

George is survived by his wife of 64 years, Nancy Colway Cammann; his daughter Amy Cammann Cholnoky and her husband John of Darien and Big Sky, Mont.; son Thomas Rhody Cammann and his wife Bonnie of Huntington Beach, Calif.; grandchildren JB, Kari, and Robbie Cholnoky, and Matthew (Andrea) and Sarah Cammann; and his brother Frederic Gallatin Cammann.

A memorial service will be held on Friday, Sept. 1 at 11 a.m., Noroton Presbyterian Church in Darien. Contributions in George’s memory may be sent to Bennett Cancer Center in Stamford, or the Open Door Shelter in Norwalk.