While Friends of Animals’ work extends internationally, Monday morning it hit close to home—literally outside a window of the organization’s downtown Darien headquarters at the corner of Sedgwick Avenue and the Post Road.

“A crew from the Darien Public Works Department began the removal of the first of four HEALTHY trees abutting sidewalks around our office building,” a news release from the animal advocacy organization said.

“Friends of Animals’ staff stood in front of the second 100-year-old tree, forcing the crew to stop what they were doing and leave until town officials could hear FoA’s reasons for opposing the dreadful plan.” 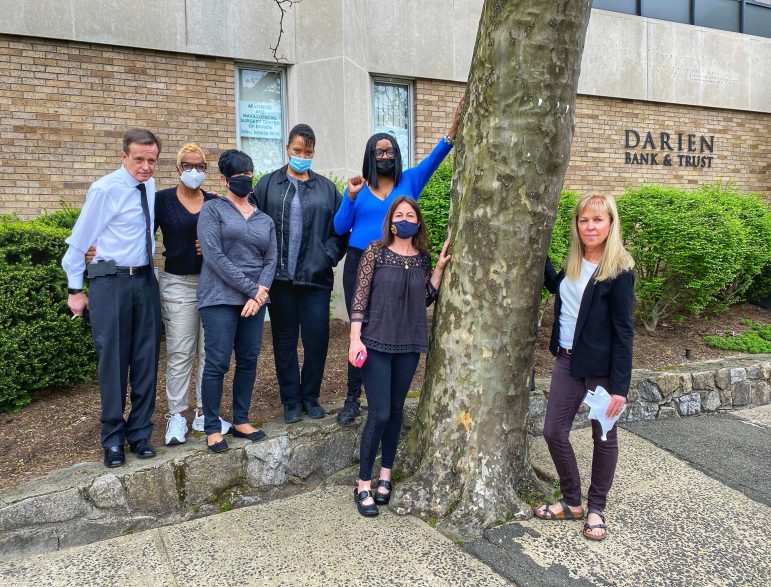 Photo by Friends of Animals

Friends of Animals staff stand by one of the trees. 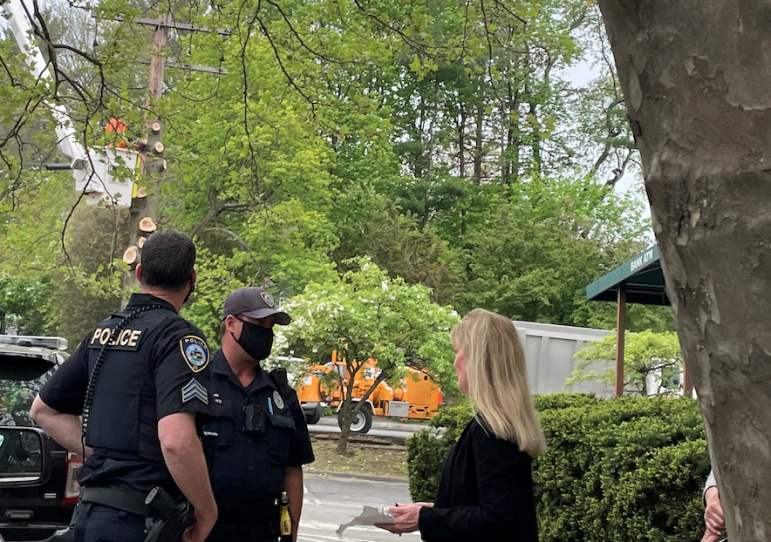 Photo from Friends of Animals

Darien police at the scene as limbs get lopped. 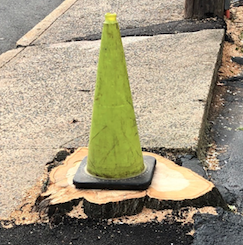 At least one tree was removed by the DPW, and a tree remains on Sedgewick Avenue. The remaining tree now has a sign on it, saying, “Removing this healthy tree is a crime against nature and humanity.”

To emphasize the message:Black and yellow strips looking like crime scene tape surrounded the sign and another rendition of crime scent tape was on the poster, proclaiming, “Crime scene; do not cross.” 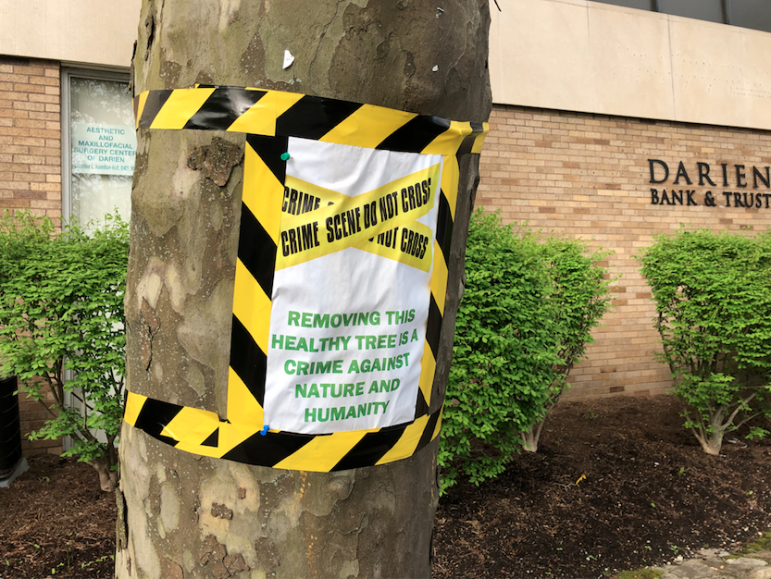 “A crime against nature and humanity …”

The bark on the tree looks like that of a London Planetree, a common urban tree that first became popular in London. 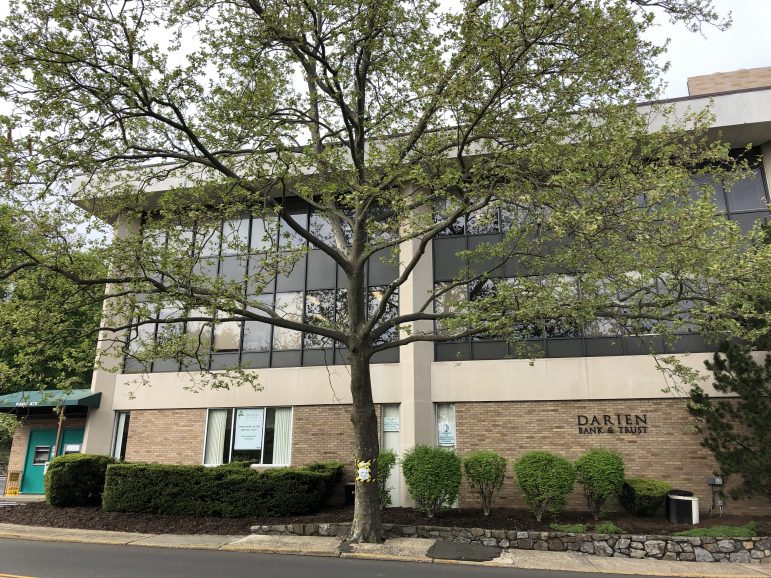 The remaining tree, seen from across Sedgwick Avenue

“If we start cutting down healthy trees because of a philosophy of ‘someone might trip’ this town is doomed,” Priscilla Feral, president of Friends of Animals, said in the news release. “What we witnessed today was a crime against nature and humanity.”

According to the news release, the tree removals were part of “a plan put in place because someone sued the town after they tripped on a sidewalk about a block away.”

But town Public Works Director Edward Gentile said on Thursday that Friends of Animals may be misinformed. 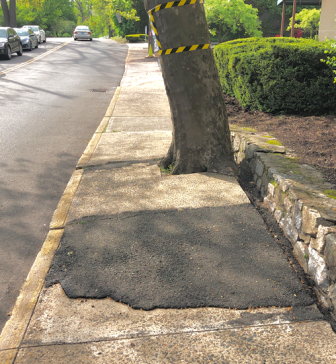 The sidewalk does rise and fall as you pass the tree, and efforts have been made with asphalt to mitigate that.

The trees, he said in an email, “are being removed so [as] to replace the concrete sidewalk, which has many trip hazards. This is the start of the town sidewalk repair/replacement program in the downtown area to provide safe and ADA [federal Americans with Disabilities Act] compliant sidewalks.

“Unfortunately the folks from Friends of Animals state that they didn’t see the posting on the trees (which are still on the trees now),” Gentile continued.

The trees on Sedgwick have been posted for removal since April 12, 2021, Gentile said. A state law allows for a 10-day period to appeal their removal, he said. That deadline would have passed weeks ago. 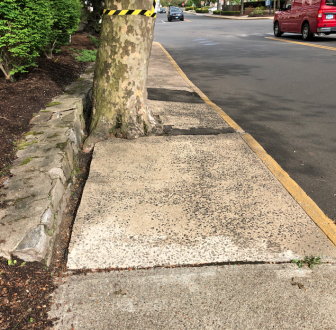 Same tree from the other side, where the sidewalk rises to meet it.

“What about the public safety issue of climate change and the negative environmental impact of cutting down healthy trees?” Feral said in the news release. “Trees store carbon, provide oxygen and habitat for wildlife and plants, provide shade and prevent erosion. What we witnessed today was a crime against nature and humanity.”

Gentile said: “We are committed and have always offered to replacing trees in the general area to supplement the removals whenever we can. That is always viable consideration.”

Nicole Rivard, editor-in-chief for Friends of Animals media/government relations section, said that Feral spoke with First Selectman Jayme Stevenson, but that didn’t result in the town backing down. Rivard wrote in an email Thursday afternoon that, so far, the tree still stands:

“[T]hey haven’t come back to cut down the second tree yet and we find that uplifting, although we haven’t heard from the town officially that they are hitting the pause button indefinitely.”

Gentile gave no indication of that.

Friends of Animals discussed various alternative approaches, describing them this way in their news release:

Darien can certainly explore other sidewalk repair methods, like they do in New York City, for example. NYC employs a variety of design strategies and construction techniques to repair sidewalks around trees. Each solution seeks to optimize the pedestrian experience while minimizing damage to tree roots.

This technique involves the removal of damaged sidewalk from the area around the tree and expansion of the tree bed. Expanding the soil surface around the tree is the most common method of repair work and is necessary to prevent further damage to the surrounding sidewalk. This practice also increases the permeable surface to help reduce stormwater runoff.

The grade of the sidewalk is gradually raised to bridge large roots while assuring a smooth, even sidewalk surface.

The sidewalk is reinforced with rebar or wire mesh to reduce uneven joint lift due to tree roots as well as the likelihood of random cracking in the future.

A layer of coarse gravel is installed under the new sidewalk to support the sidewalk while allowing space for root growth. All excavation and concrete removal within the area of the tree are performed with extreme care. We employ best practices to minimize impact to trees, including hand and/or pneumatic excavation and careful protection of exposed roots protection.