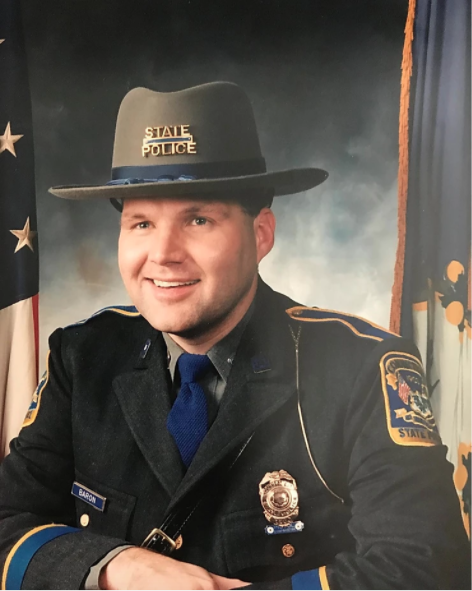 State Trooper Kenneth Baron Jr. passed away on Monday, May 25.

Flags have been lowered and will remain at half-staff across the state until sunset on Saturday, Gov. Ned Lamont directed in an announcement Tuesday, to honor Connecticut State Police Trooper Eugene Kenneth Baron Jr., who died Monday from cancer acquired by responding to the World Trade Center after the 9/11 massacre.

“Trooper Baron is a hero who not only dedicated his career to protecting the people of Connecticut, but he did not hesitate when called to respond to one of the worst attacks in our nation’s history,” Lamont said in an announcement released Tuesday. “He embodies the definition of public service and what it means to lead a career with integrity, respect, and generosity. 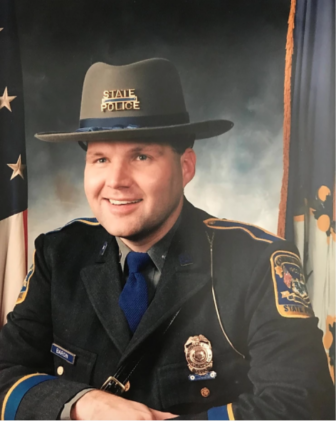 State Trooper Kenneth Baron Jr. passed away on Monday, May 25.

Baron and other Connecticut state troopers went to the World Trade Center ruins to help look for survivors in the rubble. He later acquired cancer that was deemed to have been acquired as a result of being at the scene, according to state officials.

Baron served with Connecticut State Police for a total of 18 years, leaving with a partial disability retirement in 2007. He is survived by his three children, his partner and her two children, two sisters, and his parents.

“Our condolences and prayers go to the Baron family at this time. Trooper Baron contracted cancer while doing a job that he loved. His first concern on September 11, 2001, was to help people affected by the terrorist attacks,” said James Rovella, commissioner of the state Department of Emergency Services and Public Protection. “He was always a trooper at heart and he will be greatly missed.”

Flags will be at half staff until sunset Saturday. That day, at about 11 a.m., Baron is scheduled to be buried.

Lamont’s half-staff order applies to state government flag displays and is voluntary on the part of any others, although customarily others follow similar proclamations from federal, state and local authorities (see below for more on half-staff flags).

Numerous other first responders were diagnosed with cancer in the years after 9/11. This week’s public announcements about Baron’s death did not disclose either the type of cancer he came down with or how it was determined that it came from the World Trade Center site.  Baron’s passing is the 24th time a state trooper has died in the line of duty, according to Connecticut State Police.

State Trooper Walter Greene of Norwalk, a member of a canine unit that also searched in the rubble of the World Trade Center site also died from cancer determined to have come from his presence at the scene.

Greene passed away almost exactly two years ago, on May 31, 2018. Greene was honored during the 2019 CT United Ride, a tribute conducted by a large contingent of motorcycle riders who memorialized victims of the terrorist attacks.

About Flags at Half Staff in the U.S.

From the governor’s announcement:

“[S]ince no flag should fly higher than the U.S. flag, all other flags, including state, municipal, corporate, or otherwise, should also be lowered during this same duration of time.”

[T]here are four U.S. Flag holidays each year, when the American flag should be displayed at half staff.

The proper protocol for displaying a flag at half staff is to briskly raise the flag to the top of the staff before lowering it slowly and ceremoniously to the half-staff position.

Although there are no laws governing the half-staffing of flags at private homes, grounds, organizations, and vessels, most citizens follow the flag display customs used by the U.S. federal government.

It is proper etiquette to display the American Flag from sunrise to sunset. In the event that one chooses to display the US flag 24 hours a day, the flag should be illuminated during the night.