The Board of Finance unanimously approved a $152.7 million operating budget, which would increase the mill rate to $16.84 a 3.15% increase from this year’s $16.33 if the Representative Town Meeting on May 10 passes the spending and tax plan unchanged.

The board had received spending proposals from the Board of Selectmen and Board of Education which would have increased taxes by 7.32% Finance Board Chairman Jon Zagrodzky said at the board’s Tuesday night meeting. 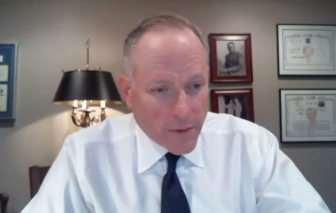 Board of Finance Chairman Jon Zagrodzky

“Nobody likes a tax increase,” Zagrodzky said, but after to the “scary” budget proposals sent to the Board of Finance, the 3.15% mill rate increase “is much more palatable than what we started with, and not completely out of line, given the mill rate increases we’ve seen in the past.

“But also, frankly, the expenditures that both boards [Education and Selectmen] are having to make, not just for operations, but for things like debt service,” he said. “So when you take all that into account, my general view is that we’ve ended up in a very good place — if you, again, think of everything from the union contract increases to COVID spending to general operating increases across the board. Everybody’s done a great job of trying to keep those well managed.”

During the meeting, there was no debate or discernible disagreement on the budget, and no votes against it on the seven-member board.

The RTM may cut any of these budgets but not increase spending, and it can’t cut any specific items from the education budget, only the total amount.

The Board of Finance also approved bonds for three separate projects:

—Money for the design of a HVAC (heating/ventilation/air conditioning) project for Holmes School — $305,000

The town grand list, a calculation of taxable property as of Oct. 1, 2020, is $8,629,179,259 after successful tax assessment appeals were factored in, and the town relies on an estimate of what percent of the total amount of tax bills will be collected — a five year rolling average — and then lowers that number by a further 0.25% of the total, just to be careful, Finance Director Jennifer Charnesky told the board.

Despite the economic disruptions from the COVID-19 pandemic, tax collections actually collected so far have been roughly what they’ve been in past years, Charnesky said.

Chernesky told the board that property tax deferrals resulted in later collections, with $893,673 collected as of April 5, and only one commercial tax bill and three residential accounts still outstanding. Chernesky said Town Tax Collector Kathleen Larkins “feels that ultimately, they will [all] be collected.”

For each fiscal year, taxes are due on July 1 (the first day of the fiscal year) and the following Jan. 1 (the midpoint). Vehicle taxes and any tax bill under $100 are due in their entirety on July 1.