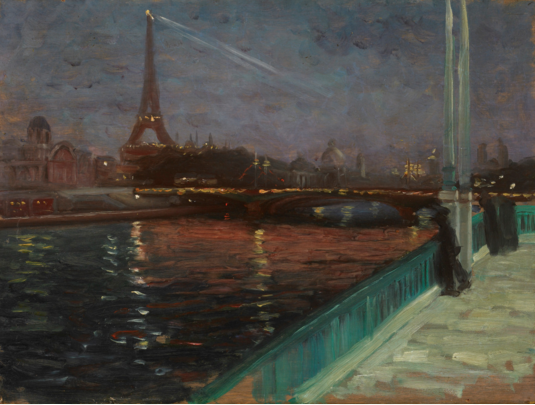 This talk on how artificial lighting influenced how artists saw Paris (from 7 to 8 p.m., Tuesday, July 12 in the Community Room at Darien Library) takes place while the Bruce Museum in Greenwich exhibits “Electric Paris” (through Sept. 4). Here’s the Darien Library announcement:

Paris was already known, metaphorically, as the “City of Light” since the Enlightenment period, but this appellation took on a new and different currency in the second part of the 19th century.

The rapid proliferation of artificial lighting illuminated the spectacle of the city’s pleasure-loving nocturnal activities and entertainment spaces. Parisians embraced the blazing illumination as a new metropolitan signature and undeniable proof of their city’s rapturous allure.

Artists, from Henri de Toulouse-Lautrec and John Singer Sargent to Mary Cassatt and Pierre Bonnard, were drawn to the excitement and aesthetic possibilities offered by these dramatic and dazzling, often lurid environments, and by the ways that lighting could either enhance or distort the appearances of people and places.

In these daringly modern compositions, we see records of the raucous side of modern life— gaiety and despair, as well as quieter, more mysterious or abstracted nocturnal scenes—providing us with a fascinatingly layered chronicle of a society in transition.

Just in time for Bastille Day–step back in time, enjoy stunning works from the Bruce Museum’s current exhibition: Electric Paris, and cast new light upon what you know about Paris during the late 19th century.

Larissa Bailiff has worked as an educator and instructor for MoMA, for the past 12 years, teaching more than 25 in-gallery courses.

Her specialty is modern European art and culture, especially that of France and Spain. In recent months, Larissa has been developing content for a new immersive arts-education and technology company called WoofbertVR.