Erin Bazner Noonan, 71, of Darien passed away peacefully at her home on July 17,  after a hard-fought battle with cervical cancer. 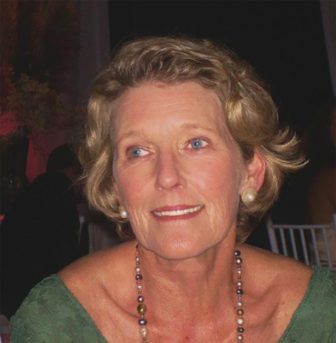 She lived most of the last 40 years in New Canaan and Darien raising a wonderful family and pursuing her many passions.

She was a masterful gardener who always knew a way to make the things around her grow bigger and more beautiful. She found equal joy in harvesting tomatoes and pulling weeds. Her flower arranging skills, while never officially judged, were positively peerless.

Erin always found ways to give back, helping to start the Norwalk Chapter of Birthright in 1980 and serving as a mentor at Young Lives for 12 years. Even when she had a chance to slow down and take in a movie, you’d usually catch her picking up her knitting needles to whip up a miniature sweater on the side for one of her many grandkids or a child in need she’d never meet.

Her kindness and generosity was met with a fiercely-competitive spirit on the golf course. She was a longtime member of Woodway Country Club, where she won 17 club championships (and a hole-in-one). She moved her game to Riomar Country Club in Vero, Florida when the snow prevented her from playing in Darien. You simply couldn’t deny her love of the game.

Her unwavering faith in God spanned her whole life and touched the lives of so many around her, serving as a Stephen Minister and helping to start the Caring Ministry at St. John Church.

Above all, Erin will be remembered most for her immeasurably generous heart. She nurtured so many in her years here on earth and now can sit back and watch the fruits of her garden grow bigger still. Maybe while knitting a little sweater.

Erin is survived by her husband Bob, her three children Dana Ruggiero (Ted Moon) of Lambertville, New Jersey; Ryan Ruggiero (Nicole) of Tigard, Oregon; and Ben Ruggiero (Kiley) of River Forest, Illinois; her two step-sons: Lee Noonan (Jen) of Wilton and Chris Noonan (Erin) of Darien; and her big, beautiful brood of grandchildren, who all call her “Nonna.”