Elsie M. Bromfield, 90, was welcomed into the arms of Jesus on March 27, 2019 in Greenville, South Carolina. 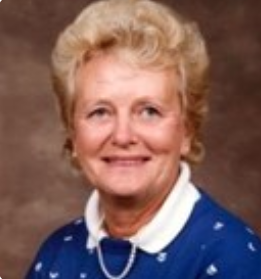 Elsie was born in Stamford, a first-generation American, the eldest daughter of Olaf and Eine Olsen.

Elsie lost her soulmate, best friend and the love of her life, Robert Bromfield, in March 2018, and she looked forward to the day when they would be reunited in Heaven.

Elsie was a lifelong resident of Stamford who fell in love with Bob during their years together at Stamford High School. Elsie and Bob rarely spent time apart from one another during their 68-year marriage, and together were active members of the Noroton Presbyterian Church and Woodway Country Club.

Elsie sang in the Noroton Presbyterian choir for decades, served on numerous committees there and volunteered with Meals on Wheels for many years. She also had a knack for painting and her creativeness oozed into a craft business that she ran with her lifelong friend, Bunny.

— This obituary previously was published by the Stamford Advocate and Darien Times.

She traveled much of the world with Bob, was fond of tennis, summer days at Cove Island and Woodway beach, reading, Yankees baseball, UCONN women’s basketball and devoting herself to her family and friends. Gentle, soft-spoken and caring, Elsie never spoke an unkind word of another person.

Services in celebration of her life will be held at 2 p.m., Saturday, June 29 at Noroton Presbyterian Church. In lieu of flowers, donations in her memory may be made to: Clubfoot CARES, Lutheran Hospice or the Ferguson Library.