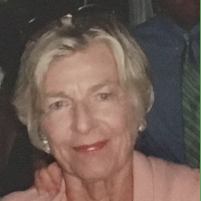 Elizabeth Winslow (“Winnie”) Cutler of Mystic, beloved wife of the late William B. Cutler, died on Sunday, June 11. She was 90. 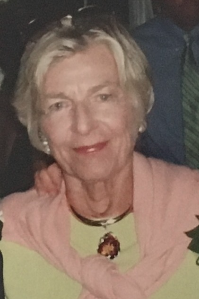 Winnie was born on May 1, 1927, graduated from the Shipley School, and spent most of her young adult life in and around Manhattan, Darien and Southampton. She summered in Old Black Point then, in the 1960s, Stonington, which became her permanent home later in life.

Winnie enjoyed life, friends and family. She traveled extensively, hosted many social events and lived life to the fullest.

A lover of the performing arts, Winnie studied dance with Martha Graham and acted in a summer stock production with Helen Hayes in her early years.

— an obituary from Dinoto Funeral Home

She became known for putting on creative and lively puppet shows at St. James’ Church in New York, and, later, at Calvary Church in Stonington.

Winnie was an active member of Calvary Church, serving as president of Episcopal Church Women for many years. At ECW, Winnie believed in supporting the Wounded Warriors, whose bravery and courage she greatly admired. Winnie was a successful travel agent and a long-time member of the Wadawanuck Club.

Winnie is survived by her daughter, Elizabeth McGovern Johnstone (Philip); her son James W. McGovern (Deborah); and her grandchildren Elizabeth W. and Charlotte W. Johnstone. She is also survived by her step-children Clarissa Y. Cutler (James Swinerton), Stuart Y. Cutler and Edith B. Cutler Hirtenstein (Scott); as well as her step-grandchildren Katherine and William Grayson, Anne and Grace Cutler, and Max and Jacob Hirtenstein.

She was predeceased by her sister, Mary Preston Jones, and her step-son Ralph William Cutler.

In lieu of flowers, donations may be made in Winnie’s name to ECW at Calvary Church, 27 Church Street, Stonington, CT 06378.