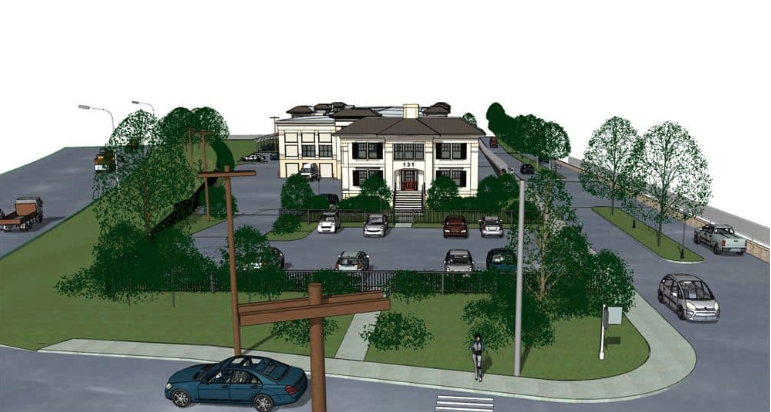 A rendering of the front of the new storage business, facing Hollow Tree Ridge Road across from Noroton Heights Railroad Station

Hollow Tree Self Storage will be hosting a “Grand Opening Celebration” from 4 to 7 p.m., Thursday, Oct. 25 on Hollow Tree Ridge Road in Noroton Heights.

The storage place is not open just yet.

At the grand opening, “Octoberfest beer, wine and appetizers” will be served.

Photo from Darien Chamber of Commerce

With family ties to the town of Darien, business owners and brothers John Hertz and Paul Hertz along with Robert Wood and Tim Wood created the self storage facility, which has about 1,000 climate-controlled units.

— Information for this article is from an announcement from the Darien Chamber of Commerce, the business’s website and a 2017 news release from the business.

HTSS is secured by a gated perimeter with electronic access, a state-of-the-art surveillance system, and on-site property managers who will provide around-the-clock security and service to customers, according to a 2017 news release from the business.

The building, which is 100 percent climate controlled, will offer wine storage, car storage and “museum-quality” storage.

There are 17 commuter parking spaces available for lease close to the Noroton Heights train station.

The new business occupies a site that’s been difficult for others to use for many years.

Despite the fact that the property lies close to the Noroton Heights business district, the large lot sat vacant for decades with a major development problem: Sewer service is difficult because the land sits between the highway and the railroad tracks.

Avalon Darien, which was built just to the west (and north of the Darien South rest stop), after that land also sat unused for decades, declined to provide a connection to its own sewer system.

Only a caretaker for the property will live at the storage site, and these kind of sites tend to generate little traffic, the Planning & Zoning Commission was told when the land-use application came before it.

The business previously announced that the storage facility was expected to open late last year, but construction was delayed.

A rendering of the front of the new storage business, facing Hollow Tree Ridge Road across from Noroton Heights Railroad Station. On the right is the driveway that Avalon Darien uses, and which will be shared by the new business.

—Door alarms on every unit and video surveillance throughout

—Along with drive-up garage units, the facility has two enclosed drive-in loading areas, for drop off or retrieval, no matter the weather.

—You can make reservations on your computer or smartphone

Another view of the new business, with the entrance along the driveway leading to Avalon Darien