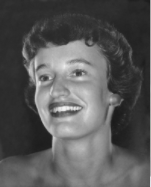 Dianne Throckmorton (Dee) Goodnow, 87, a longtime resident of Darien, passed away peacefully on April 24 in her home with her family.

Dee enjoyed life to the fullest. Possessing boundless energy, Dee’s days were filled with a love for her gardens, animals, art and the outdoors. She was an avid sportswoman winning many tennis and golf matches.

Dee was born in New Rochelle, N.Y., on June 1, 1929, to Harold Avington Throckmorton and Dorothy Mason Throckmorton and was raised in Rye, N.Y., and Great Barrington, Mass. Her father was a stockbroker and nationally ranked tennis player, winning the U.S. National Doubles Championship in 1918.

She attended Rye Country Day School in Rye and graduated in 1947. She attended Bennett Junior College in Millbrook, N.Y., graduating in 1949 as a drama major. Upon graduation she spent the summer of 1949 working in a summer theater in Minnesota.

She returned to New York to work in fashion. First at B.Altman as a sales assistant and then with fashion photographers Fernand Fonssagrives and Irving Penn. In 1955, she married Edward Barr (Ned) Goodnow in Rye. They moved to Darien in 1959 and had three children.

Dee’s passions included The Garden Club of Darien and The Darien Land Trust. She served on the boards of both organizations for many years. Photography, beekeeping, painting, and horticulture were a few of her interests. In addition to tennis and golf, she hiked, biked, walked, skied, and was very comfortable on a horse.

She was a longtime member of The Tokeneke Club, Wee Burn Country Club and The Noroton Yacht Club. If not on a tennis court or a golf course, most days she could be found digging in her garden. A strong, tall and elegant woman, Dee combined a touch of high fashion with a pair of muddy garden boots.

The Goodnow family wishes to thank all the amazing care-givers who cared for Dee with all their hearts, love and compassion during the past few years while Dee struggled with Alzheimer’s: Claudia, Huver, Elba, Iderle, Debbie, Laura, Barbara, and Valerie. We are forever grateful and humbled by your devotion and your loving and generous hearts.