A new rendering of part of the project, looking southwest down the Post Road. The building with the tower would be on the corner of Post Road and Corbin Drive.

Although he didn’t announce any changes in the plans to transform the Corbin Drive/Post Road/I-95 block of commercial buildings, the chief developer of the project gave out more details to a packed Community Room at Darien Library on Wednesday night, and answered a lot of questions from the audience.

Some information that’s new or hasn’t been emphasized before about the project:

David Genovese, principal of Baywater Properties LLC, is proposing to redevelop the site with Penny Glassmeyer, principal of PG Properties. Genovese spoke at the meeting with John Block of Tighe & Bond and Gary Brewer, an architect with Robert A.M. Stern Architects.

The two developers have bought up nearly the entire block, with the exception of the building where the Bank of America is located, next to the Exit 11 ramp for the southbound side of Interstate 95. The (unnamed) owner of that building may become a partner in the project or may sell it at a later date, Genovese said. 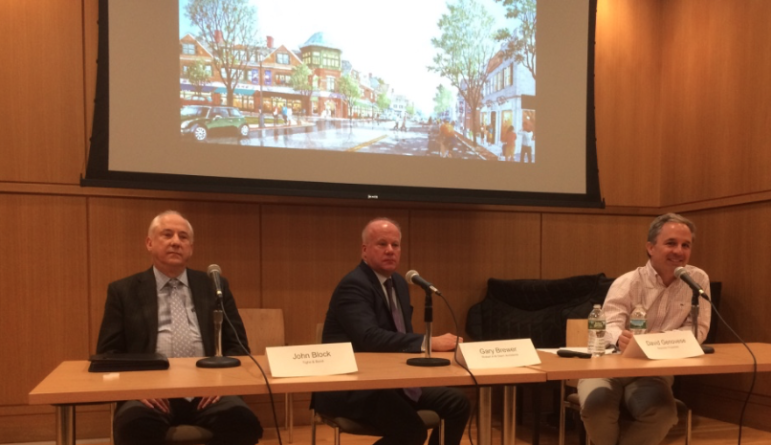 The project, together with the similar large redevelopment projects announced by the major property owners of the Noroton Heights business district, are described by several town officials as Darien’s biggest redevelopments since I-95 was constructed in town in the late 1950s.

Correction: In an earlier version of this article, some of the figures for square footage for retail, office and residential space on the site now and proposed were incorrect. They’ve now been changed.

Parallel parking by the sides of streets (including two new streets) would be supplemented by underground parking constructed at great expense in ground that will flood if the construction isn’t sound enough. Town officials have said that the project’s plans should not contemplate using any other parking spaces downtown.

Not much was said about traffic at this meeting that hasn’t been said before: A town traffic study is expected for the project, Genovese said, and traffic will be mitigated in part by office workers using the Darien Train Station, about a quarter of a mile away from the site (roughly a five-minute walk) and the Exit 11 off ramps and entrances to Interstate 95.

An internal street parallel to the Post Road, and another one leading to its western end and parallel with Corbin Drive would also help Post Road traffic, he said.

Zoning changes that would allow the project to go forward will be put before the Planning & Zoning Commission in a public hearing at its May 17 meeting. (The two Noroton Heights developments had a similar hearing about zoning changes earlier this week.) The P&Z Commission is expected to discuss the matter, or possibly continue the public hearing, on May 31.

A new rendering of part of the project, looking southwest down the Post Road. The building with the tower would be on the corner of Post Road and Corbin Drive.

“We’re going to push as hard as we can to get through the approval process this year,” Genovese said. The Board of Selectmen recently approved a plan to hire additional P&Z Department staff before the end of the current fiscal year, which ends June 30, largely to handle the extra work from the three big commercial development plans, and more money is proposed for that new staff for the next fiscal year.

“We could start later in 2017 or early in 2018” if the approval process takes longer. “We think it’s about an 18-month [construction] process,” meaning construction could be complete as early as mid 2018. Genovese said it’s possible, if delays happen, that it might not be complete until late 2019 or even early 2020.

One spur toward getting the project completed earlier is that 3.8 miles to the east, Norwalk is considering the construction of a shopping mall near Exit 14. The mall is expected to have Nordstrom’s and Bloomingdale’s department stores — and they’re competing with Darien to snag L.L. Bean, which is considering that offer.

L.L. Bean and Other Retail Shops

Genovese said that late one night when he couldn’t sleep, he looked up the email address of the CEO of L.L. Bean and shot him an email, explaining the project and asking him if he would be interested.

“In 15 minutes, he replied to e that he had actually grown up in Fairfield,” Genovese said. “We’re negotiating now.”

Rent from L.L. Bean would not subsidize any other part of the project, Genovese said. “They don’t subsidize in terms of their rent. It will actually be one of our lower rents.” But, he added, “They have an incredible marketing budget” and that might bring people not only to their store, but to the others nearby.

L.L. Bean’s products hardly overlap with those of the Darien Sport Shop, which would be just across the Post Road, Genovese said. Genovese repeated what he’s said before: He’d already pledged to the late Stephen Zangrillo, founder of Darien Sport Shop, that he would respect that store in whatever decisions were made regarding the proposed development.

Asked about what will happen with the small retailers now on the property, Genovese said the goal of the project has always been to retain them, and some of them have negotiated guarantees that they can come back to the site when it’s rebuilt.

The tailor, cobbler and dog grooming shops located away from the Post Road all are guaranteed to return, he said. The owner of the Helen Ainson shop negotiated an agreement that guarantees the shop will return at a low rent. 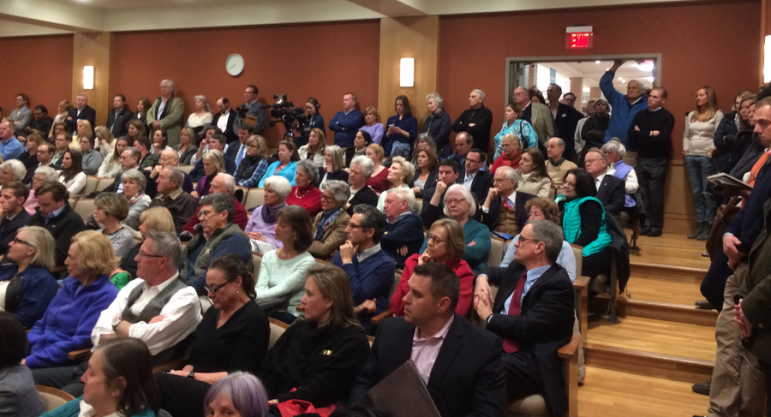 The Louise Parker Berry Community Room can seat 225 people, and ... 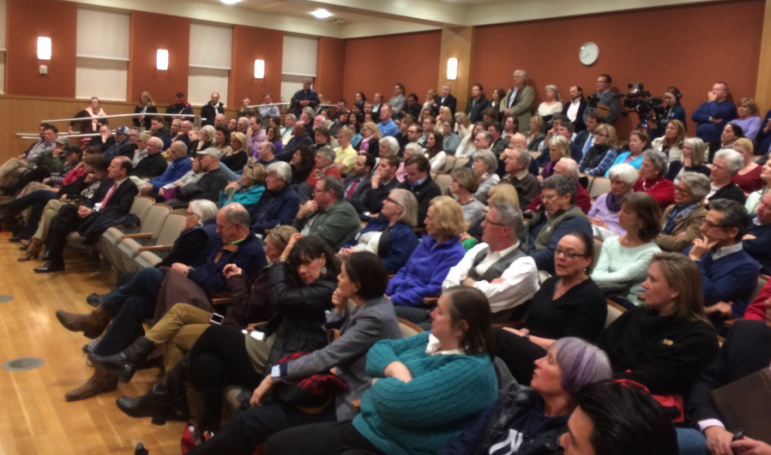 ... the room was full. Just before the meeting, there wasn't a space available in the library parking lot (there was room in the lot used for excess library parking off of Thorndal Circle).

Genovese has pledged to find other store space for the businesses that will be forced to move, and said he will welcome back locally owned businesses with subsidized rents. While adding retail space to the site, the developers want to attract at least two new restaurants, which could be located on either side of the “Town Green” plaza and have outdoor seating there in warmer times of the year.

For the small, local tenants, Genovese said, “You’re not going to be paying anything more, really, than you are today.”

Genovese said he would like to keep the downtown Post Office on the block. If nothing else, it’s great for foot traffic for nearby stores, he said.

Ed Friend, an official in the letter carriers union, which has more than a dozen members at the Darien Post Office, said the U.S. Postal Service will likely “ship us off to Camp Avenue or possibly South Norwalk” if the replacement post office space that Genovese’s company is negotiating isn’t large enough for more than a storefront.

To keep the carriers, who are familiar with Darien and who also shop in downtown stores and restaurants, the new space will need to be 8,000 to 9,000 square feet in size, Friend said.

When the New Canaan Post Office recently moved, the change caused havoc with the letter carriers, Friend said. Genovese said negotiations with the U.S. Postal Service are ongoing, but “it’s been really challenging […] The Postal Service is like a battleship. It takes a long time. We’ve been pushing on that, and I promise you, we’ll continue to try.”

Genovese said the 66 condominium apartments in the project would have one to three bedrooms and be positioned in the market for empty-nesters. They’d be large enough that it wouldn’t be too much of a burden for those who are “downsizing” their furniture and possessions after living in a house in Darien, but not as expensive as the Kensett Darien condominiums.

Chris Noe, who has run for the first selectmen’s office in the past as an unaffiliated candidate, said providing empty-nester homes for those who already live in Darien will still raise the school population because more families with children will likely move into the houses those empty-nesters move out of.

Genoveses reply was that that would happen anyway — wherever the empty-nesters move to.

Genovese also pointed out that developing the land will increase the town tax base, helping to pay for the extra classroom space town officials expect to need in future years. Empty-nesters who live downtown are likely to support downtown stores and restaurants, he said later in the meeting.

First Selectman Jayme Stevenson, who attended the meeting, thanked Genovese and Glassmeyer for proposing the project, which she said “will keep the town of Darien relevant for generations to come, so please accept my thanks on behalf of the town.”

Genovese said 300 people have emailed him, largely through a website about the project that he’s set up, YourDowntownDarien.com, and he invited people to get in touch by email or phone if they have questions or concerns about the project. People can also get in touch with town planning boards and the Planning & Zoning Department to ask questions or voice their opinions, he said, and they can participate in the upcoming public hearings.

Correction: In an earlier version of this article, some of the figures for square footage for retail, office and residential space on the site now and proposed were incorrect. They’ve now been changed.