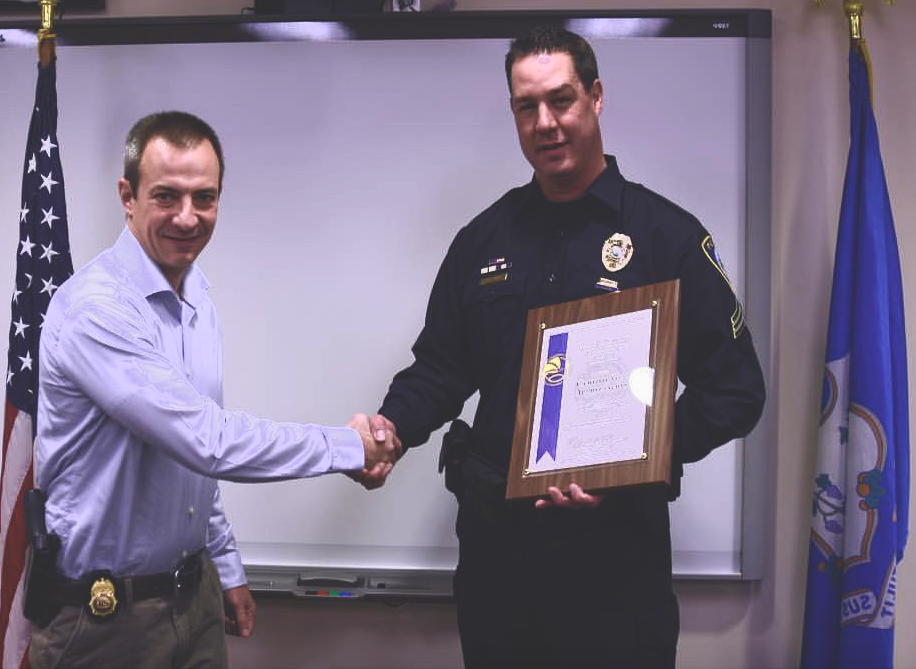 Detective Sgt. Jeremiah Marron (right) gets a certificate of appreciation from Brian Malagrida of the DEA Bridgeport resident office on Tuesday.

Two Darien police officers were recognized Tuesday the federal Drug Enforcement Administration and presented with plaques for “outstanding contributions to the success” of a joint investigation into a heroin-selling ring in Fairfield County, Darien Police Capt. Ray Osborne announced in a news release.

On Tuesday, Brian Malagrida of the DEA Bridgeport resident office awarded Certificates of Appreciation to Detective Sgt. Jeremiah Marron and Officer Michael Cummings, the news release said, “in recognition of their outstanding contributions to the success of the aforementioned investigation as they were designated as case-specific deputized officers who contributed greatly to the overall success of this operation.”

The investigation resulted in 13 arrests and the seizure of more than $215,000 in assets, including six firearms, two vehicles, and drug seizures of more than a kilogram of heroin and four kilograms of cocaine. 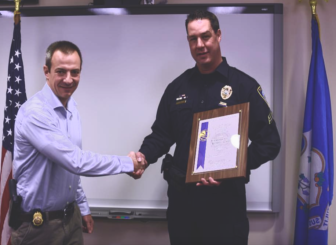 Detective Sgt. Jeremiah Marron (right) gets a Certificate of Appreciation from Brian Malagrida of the DEA Bridgeport resident office on Tuesday. Officer Micheal Cummings (not pictured) also was awarded a certificate.

The description of the operation sounds a lot like “Operation Face Down,” which Detective Sgt. Jeremiah Marron briefly described at a recent presentation at Darien Library.

But when Darienite.com asked whether the operations were one in the same, Marron refused to comment, saying Darien Police Department wouldn’t be releasing any further information on a federal investigation. A message has been left with a DEA regional spokesman in Boston to get more information.

In early October 2015, after several heroin overdoses within a week in Stamford, Norwalk, Darien and Trumbull — four of them fatal — the DEA Bridgeport office, together with police in the narcotics units in each of those communities’ police departments, started the investigation.

Members of the task force “began gathering intelligence and connecting that information from department to department. After a short period of time a network of suppliers distributing kilogram quantities of heroin from Bridgeport to Stamford and the greater Fairfield County area, were identified.”

As part of a presentation on Darien police activity related to drug enforcement, Marron gave this description of “Operation Face Down” at the Jan. 19 presentation:

So probably the largest case that we worked on this [past] year was again information that we developed. It was a federal investigation that was called Operation Face Down.

It was titled “Face Down” because that was [what was on] the stamp on the packages of heroin in a certain batch that was going around [and] that was responsible for dozens of fatalities in Fairfield County towns.

So we joined the Stamford and Norwalk police, the DEA [U.S. Drug Enforcement Administration], and the FBI. We conducted a six-month-long investigation involving undercover officers and we traveled through a variety of East Coast states, and as you can see [in the slide] some of our results — they’re pretty lucrative. Hopefully we made somewhat of an impact. 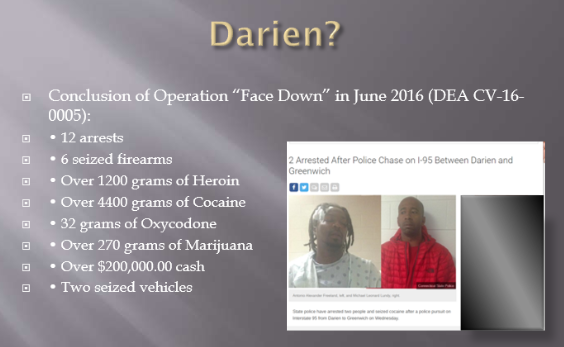 The list of what was seized and the number of arrests is very similar to the list in the Darien police news release that came out Tuesday, Feb. 7.