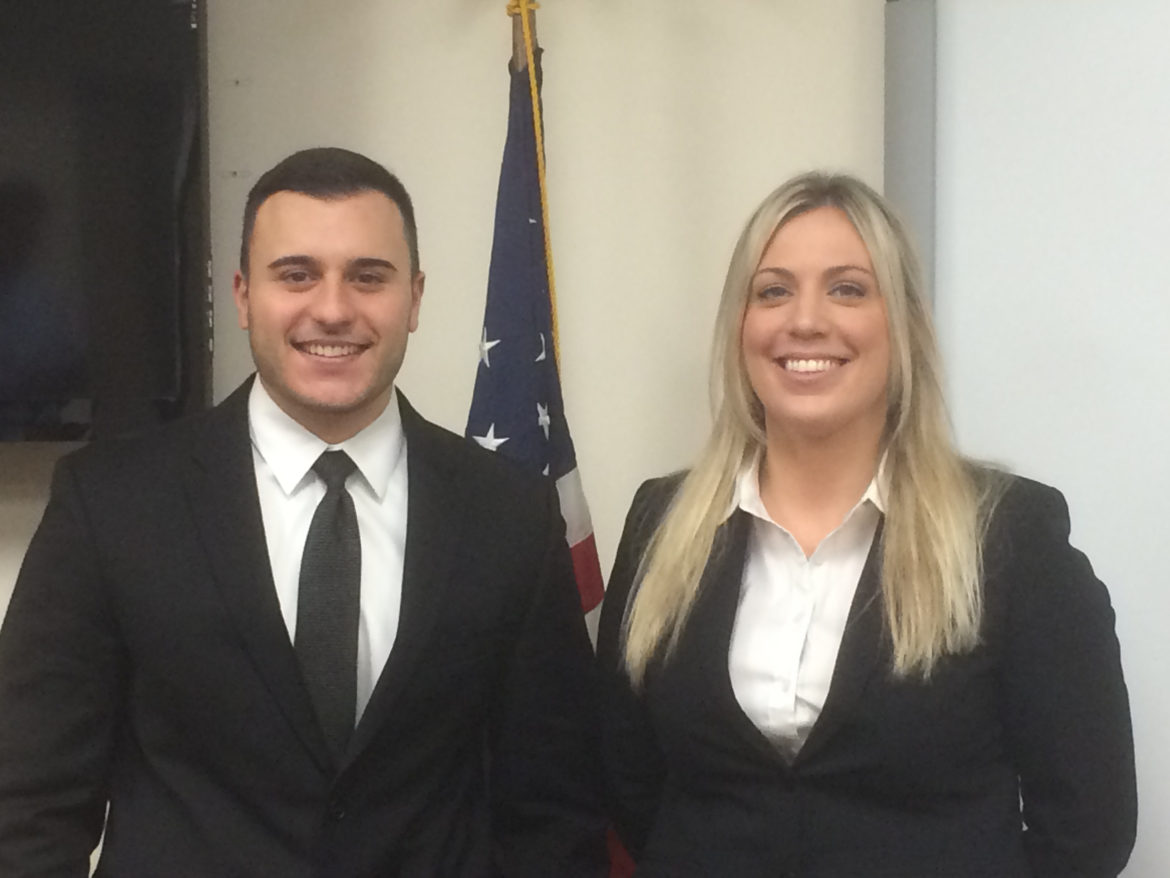 Darien Police Department filled its last two open positions on Thursday when two new, probationary police officers were sworn in in front of their families, other police officers and town officials, but it will take a while before they’re through training.

The two new officers will be training until after Christmas, said Police Chief Raymond Osborne. In fact, as Town Administrator Kathleen Buch said earlier in the week, the department has two other officers expected to be on medical leave, which means that the agency, with about 55 sworn officers, will have essentially four vacancies for much of the year.

Buch told the Board of Selectmen on Monday that in order to avoid excessive overtime, Osborne had told her the Darien police boat likely won’t be used on weekdays early in the boating season.

“That’s too bad,” First Selectman Jayme Stevenson said. “Brand new boat. […] I would recommend that, if they can, put the boat out on Thursdays and Fridays, when a lot of people use the water.”

Selectman Susan Marks added: “Or even from midday on.”

Steven Costantini  of Milford and Kelly Thurston of Naugatuck were scheduled to start work on Monday, April 2 before they go off this Friday to the state Municipal Police Academy in Meriden for about six months — 26 weeks — of training on Friday.

Their first week would be spent partly in some firearms training and learning some department rules and regulations, Osborne said.

“Being a police officer these days is not always easy,” Osborne said. “We’re sometimes asked to take on tasks that a lot of people shy way from or do not want any involvement with.” 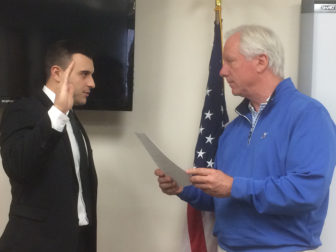 Osborne also reminded the families and friends in the audience that they’re important to police officers: “Congratulations to you and your families, of course, because we know that it’s a big endeavor, and your families are certainly involved and supportive.”

“We expect that you’re going to contribute as police officers here in Darien using the same good judgment you used in your lives.

“This is community policing in Darien. Police across the country have been criticized in recent times. I knock on this wood that we have not had that problem in Darien, and I sincerely hope that we never do.”

Both from Families with Other Police Officers

Thurston grew up in Naugatuck and currently lives there with her boyfriend, who is a sergeant in that town’s police department. She also has a brother in the Bloomfield Police Department and a cousin who’s a Connecticut state trooper. 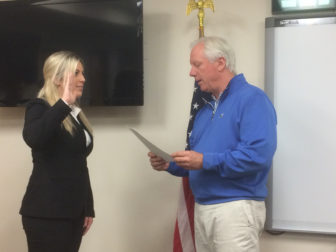 Thurston sworn in by Joyce.

She earned a bachelor of science degree in education from Central Connecticut State University and recently worked as a physical education and health teacher in Naugatuck. She is a long-distance runner who has completed several half marathons.

Costantini, a 2007 graduate of Derby High School, received a bachelor of arts degree in psychology from the University of Connecticut. Before he was hired by Darien, he was a specialist for the Human Resources Department at Yale-New Haven Health.

His great-grandfather was a police officer with the Pelham Bay Police Department in New York state. He also has an uncle who was a New York City police officer in the South Bronx.

The two officers were picked from an initial pool last December of 60 applicants, 58 of which dropped out or were dropped after an extensive winnowing process.

“Just to give you a little bit of background on what these two people went through to get here at this point,” Osborne told a crowd made up mostly of friends and relatives of the two new officers, “we started giving the test last January.

“They had to take a written test, an agility test, [do] an interview with our police personnel, a polygraph test, a psychological exam and interview, drug testing and then an extensive background check.” The Police Commission also interviewed them before making a final decision to hire them.

“It’s great to see such qualified individuals with a great passion for police work join us,” Osborne said.

The hurdles aren’t over.

“You get sworn in today [Thursday, March 29],” Osborne continued, “and then you get to go to the police academy for six months. After you graduate — and I expect you’re both going to graduate, you get to undergo about 480 hours [three months] of field training with our field training officers here.”

The Police Department typically tries to hire experienced officers who don’t need to go through the police academy, department officials have said. This time, the town will be paying two officers for half a year’s worth of training apiece.

“We probably will not see them on the road as full-time, active Darien police officers until sometime after Christmas, this year. That’s how long it takes to get going.”