A group of organizations in Darien are coming together around a
common cause: celebrating diversity and promoting an inclusive community.

— an announcement from the organizers of Darien United

The YWCA Darien/Norwalk, the Darien YMCA, Darien Library, and Minority Voice have partnered to launch Darien United, a campaign that aims to make sure Darien is a welcoming place, particularly for people of color, LGBTQ individuals, immigrants, and people with mental or physical disabilities.

Here’s how the Darien United project is described by its organizers:

“Darien United is a grassroots initiative made up of Darien residents and local leaders who commit to creating and supporting a welcoming community that respects and encourages contributions of all people, in all our beautiful variety of race, ethnicity, ancestry, national origin, class, age, sex, sexual orientation, gender identity or expression, language, mental and physical ability, military status, and immigration status.

“We commit to upholding these values within our town, organizations, and businesses, as both aspirational and operational guideposts in our everyday practices and priorities.”

The idea was first conceived and inspired by local artist and activist Nobu Miki, who is the founder of Minority Voice, a support group for women of color in Darien. Miki has led a series of virtual discussions for Darienites and local leaders on diversity issues over the course of the COVID-19 pandemic.

“I have learned that there are many people who’d like to have more diversity and inclusion in Darien through these discussions, especially young white families want to raise their children in a diverse environment,” Miki said.

“We have already lots of open minded wonderful people here in Darien, and I thought that we needed a town-wide campaign,” she said. 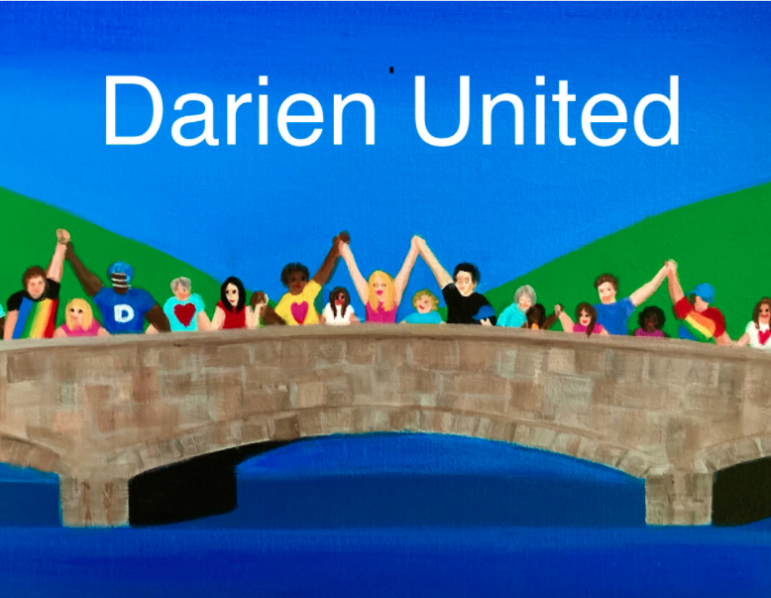 The YWCA Darien/Norwalk is helping to lead the effort.

“The YWCA, at its core, believes in and supports equity for inclusivity of all people. We are excited to have the opportunity to actively participate the Darien United movement and create a way for our local community to demonstrate our shared desire to celebrate all kinds of diversity in our wonderful community,” said Marli Hayes, interim CEO and director of the YWCA Darien/Norwalk.

The Darien YMCA and the Darien Library have also joined on, pledging to support
Darien United through related events and community programs.

“Every day, the Darien YMCA works side by side with our friends and neighbors to strengthen our community. Together, we work to ensure everyone—of any income, faith, ability, sex, sexual orientation, gender identity or expression, race, ethnicity, national origin, cultural background, or other unique personal characteristics—has the opportunity to live life to its fullest. We are excited to support the Darien United movement to recognize and celebrate our diversity in hopes of advancing true equality and inclusion for all,” said Jennifer Gardner, CEO of Darien YMCA.

“The Library has long been a place that residents turn to for information, education, and important community conversations. It is also one of the first places that new residents visit as they begin putting down roots in the community. We are thrilled to support Darien United and to continue strengthening our commitment to being a place that lifts up a diverse array of voices and cultural perspectives and traditions through our events and resources,” she said.

Miki, who is the host and founder of the annual Art Darien show at Grove Street Plaza, created a bumper sticker and prints featuring the Darien United logo — which depicts a diverse group of Darienites holding hand atop Rings End Bridge — that will be sold at the art show and available for purchase online at artbynobu.com.

A portion of the proceeds from the sales will go toward future community events and outreach for the Darien United campaign.

Darien United is seeking additional local organizations and businesses to join the
cause. Interested parties can visit YWcadn.org/DarienUnited for more information.