A Darien restaurant and a supermarket in town each received a “C” rating (the worst) in the six most recent health inspection reports released by the Darien Health Department.

Each of the other four food-serving establishments, received “B” ratings in the inspections that took place from Aug. 17 to 22. None received an “A.”

Editor’s note: Links to the Stamford and Norwalk online health inspections for restaurants are now included below and will be included in future reports on Darien health inspections. Although all local health departments use the state rating system, each department may vary in the way it interprets rules. Norwalk reports its 1-to-3 “Lighthouse” local ratings; Stamford lists violations and the points deducted for each.

—Steam — 971 Post Road — Aug. 17 — Town Rating: C — State Score: 71 — Inspector’s Remarks: “No QFO [Qualified Food Operator] on site; several new employees, no food training; not washing produce; bare-hand with produce upon entry; washing hands in prep sink; no sanitizer set up during busy prep/start of lunch; some equipment left unclean: microwave, mixer, knives, dumpling machine parts (?); labeling violations (plastic unlabeled container, [contents?] not in original [container?]); thawing food on the counter; split wood on the prep table (uncleanable); gasket in poor repair: hanging off/damage; invert single service containers; waste water frozen on food, water dripping from hole in ceiling; both sets of doors open … flies in kitchen; both sets of doors open (main door and kitchen entry doors); hole in ceiling … near prep sink (plastic trash bags in place); personal phone left on the scale in prep area. — Inspector’s Comments: “Water wash hood without water in it, mop hung outside, gloves used for?, small portion of wontons in bain marie at 55 degrees (storage issue). Owner Mr. Lee arrived on site during the inspection. Lengthy discussion about the repair to the ceiling/water damage and the need for employee training and QFO leadership. Mr. Lee will contact Mr. Chu to arrange a training for all kitchen employees. It was agreed that in two weeks time he would be able to complete a comprehensive training program with all staff.” 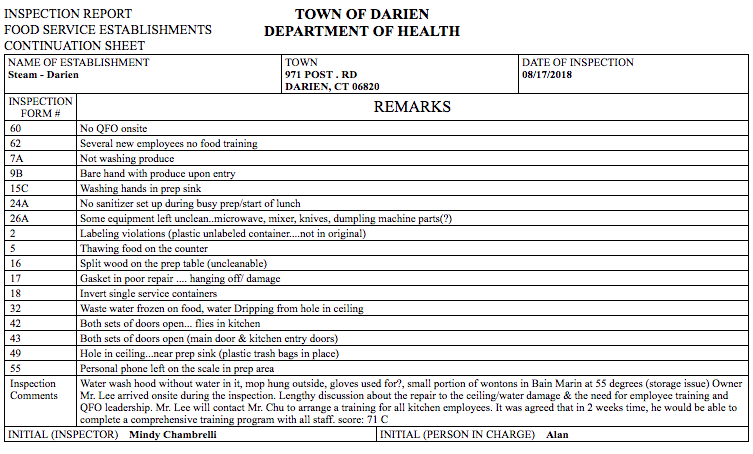 Inspector’s remarks and comments section of Aug. 22 inspection of Stop and Shop at Goodwives Shopping Center