Criminals beware: Argo, one of two Darien Police Department canines, already trained and certified both to sniff out narcotics and track suspects, now has a new crime-fighting skill. 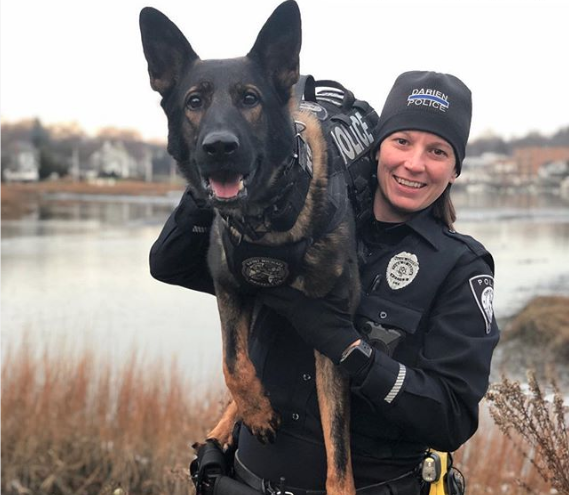 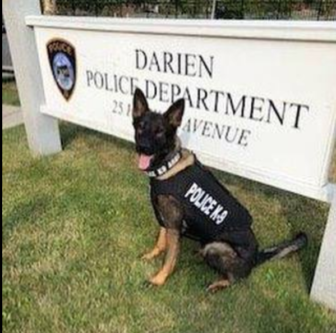 “And when you say ‘apprehension work’ you mean going after the, ah —” Commission Chairman J. Paul Johnson began to ask.

“That means he can tackle the bad guy,” Osborne said.

Osborne explained that Argo was young when he became a police K-9 in the department (back in 2016), “so we needed to put a little bit of experience and get a little age on him before we were comfortable certifying him in apprehension work, as well.” 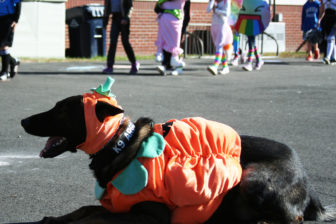 Argo the K-9, (disguised for undercover work) enjoys watching a Halloween parade — and doing a bit of parading himself.

Certification in narcotics and tracking work had come earlier for the K-9 team, one of two officer-canine pairs on the police force. The other is Officer Leslie Silva and Kenny, a a yellow Labrador retriever who started on the force in June 2017.

“I’d really like to commend Sgt. Seth O’Brien from Stamford P.D., who is the head trainer for the K-9 unit down there,” Osborne said. “We train with them, and he’s brought Argo and Amanda and Leslie a long way and does a fantastic job with training our K-9 unit.”