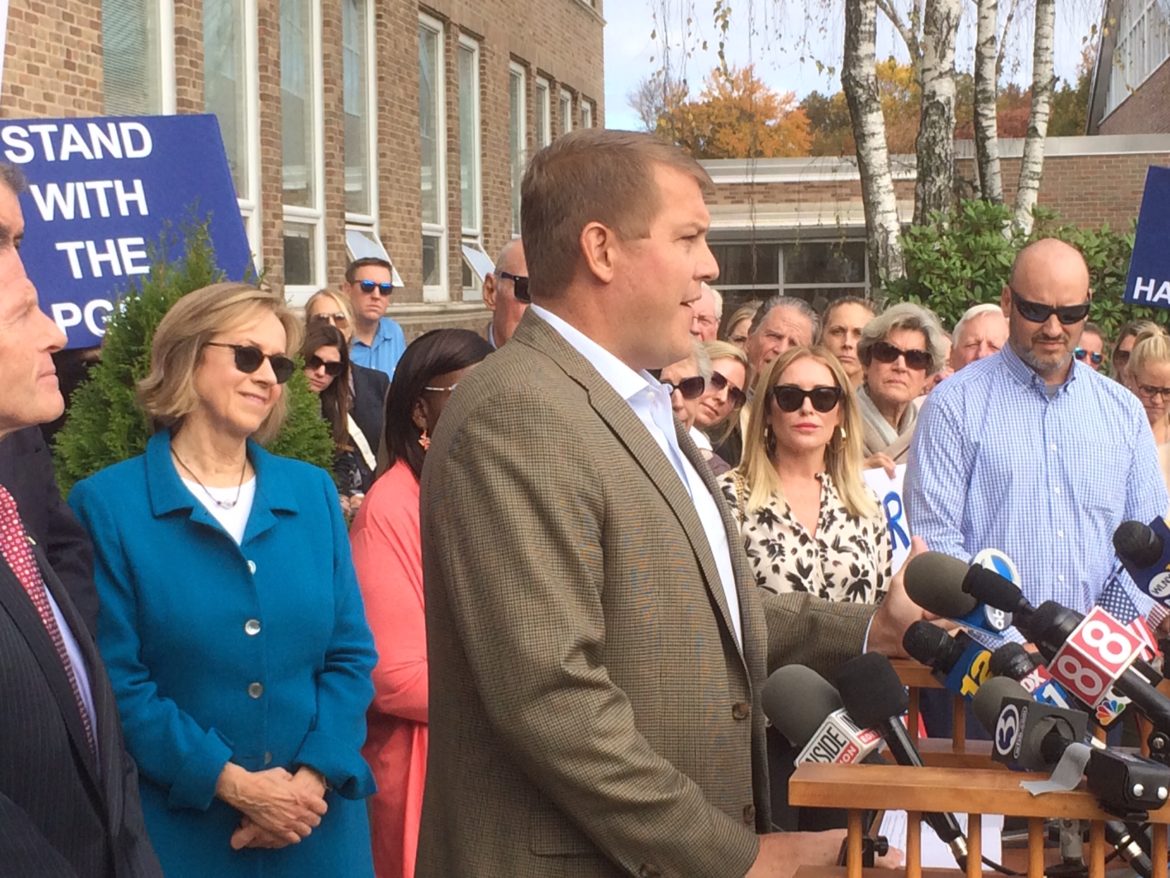 In front of Town Hall and before almost 100 friends and supporters rallying there with signs and frequent applause, elected officials on Monday repeated demands to keep Scott Hapgood, charged with manslaughter in Anguilla, safe when he’s there and treat him fairly in the judicial proceedings against him.

“We want fair and transparent proceedings and safety for Scott Hapgood as he goes through this,” U.S. Sen. Richard Blumenthal said. The judicial process on the island, a dependency of the United Kingdom, must provide him “basic safeguards of fundamental fairness,” the Connecticut senator said.

All the public officials who spoke, along with one of Hapgood’s lawyers, made the same points: Anguilan officials need to keep Hapgood safe and the proceedings against him fair. Hapgood’s next pretrial hearing takes place on Nov. 11. After that, the magistrate now hearing the case will decide if it proceeds to trial, with or without a jury.

Blumenthal said he, U.S. Sen. Chris Murphy and U.S. Rep. Jim Himes have been in touch with the U.S. State Department to press the United Kingdom and Anguilla governments to provide for Hapgood’s safety and rights.

Hapgood was charged with manslaughter in April after fighting in his hotel room with an employee who, Hapgood said, had arrived claiming to fix a sink that wasn’t broken and then attempted to rob the family.

A toxicology report released much later showed the man, ,Kenny Mitchel, had enough cocaine and other substances in his blood to be the primary cause of his death, although prosecutors continue to accuse Hapgood of killing the man in the fight.

Editor’s note: Darienite.com will publish more statements in whole or in part, from the news conference.

Hapgood thanked his friends for coming out and showing his support:

First Selectman Jayme Stevenson, the first at the podium, said that what happened in Anguilla “has become a a nightmare for the Hapgoods, for our community and for the nation and beyond. As a parent of five children myself, I know that Scott did what any parent would do, what any of us here would do, protect his children from a highly intoxicated and crazed man.”

She added: “The Hapgood family has been through the unthinkable, I don’t think any of us can quite imagine, and I applaud them for making every effort to fully participate in the judicial process in Anguilla. Scott Hapgood is doing this to clear his good name and bring peace and closure to his family.

“We’re here today to stand with and beside the Hapgood family as a community and to ask for transparency, fairness in the judicial process and safe passage for Scott as he travels back to Anguilla in a few days.”

Supporters of Scott Hapgood and his family wait for the news conference to begin. Scheduled for 11 a.m., the conference was 15 minutes late, apparently to allow television reporters from Hartford to arrive. The mass of supporters were invited and town officials put up “No Parking” signs on nearby streets, but not all news organizations were told parking would be tight — with all Town Hall parking spaces filled up. It may have taken some reporters 15 minutes just to find parking in the area.

Although U.S. Rep. Himes and Sen. Murphy weren’t at the news conference, statements from them were read, largely repeating what Blumenthal said about keeping in touch with State Department officials and urging U.K. and Anguilan officials to safeguard Hapgood’s rights.

Weeks ago, following a segment about Hapgood on the “Fox and Friends” television show, President Trump tweeted that he wants to make sure Hapgood’s rights are protected and that he would look into the matter. Blumenthal said the White House legal counsel’s office has become involved in the case. 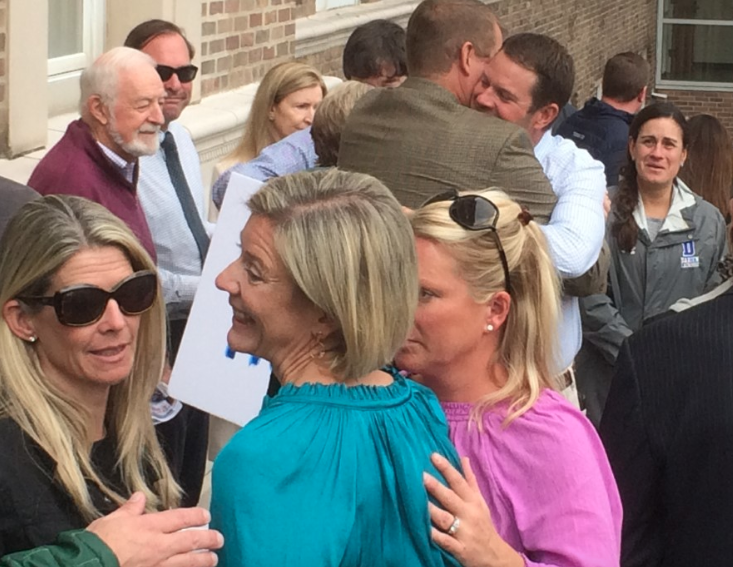 After the news conference, Callie Hapgood smiles as friends greet her and hug her. Scott Hapgood gets a hug in the background. 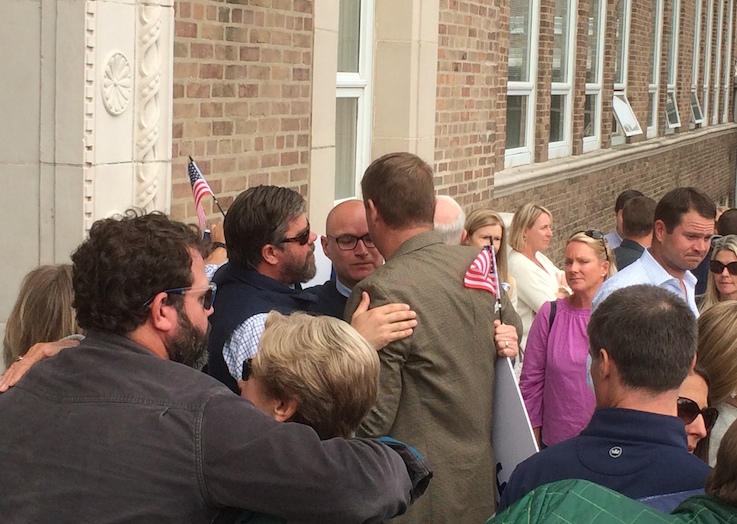 More hugs — and some flags.

This was the closest we saw to Scott Hapgood smiling at the news conference. His wife, Callie, at left, accepts another hug.

Here's the view, roughly, from the podium, minutes before the news conference (the photo was taken from just behind the Town Hall glass doors). When the Hapgoods and officials came out to speak, there were a few more reporters, another television camera or two and some of the crowd gathered to the right.

Selectman Susan Marks and RTM Moderator Seth Morton can be seen in the crowd that showed up for the Hapgood news conference. See anyone you know? 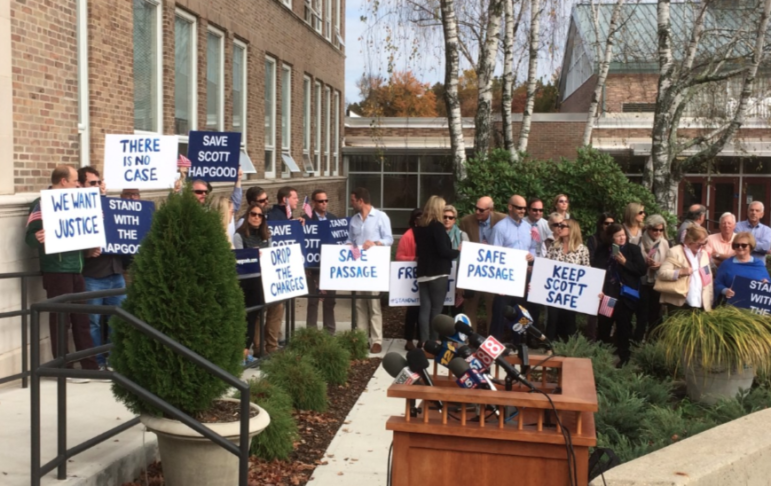 This picture shows just about every type of sign people in the crowd were carrying.

State Rep. Terrie Wood, a friend of Hapgood’s parents, said she’s known Scott Hapgood since he was 4 years old. “I watched Scott grow up. […] I watched him […] come back to this community and bring his family back here to grow his family and have the same experience here.

“By virtue of so many people being here, it’s evidence that Scott cares deeply about this community, and he’s a good person,” Wood continued. “He’s not a man looking for trouble. Trouble came his way, and now its a situation he tragically has to deal with. It’s upended his family, but we are all here to support you, and I think you know that.” 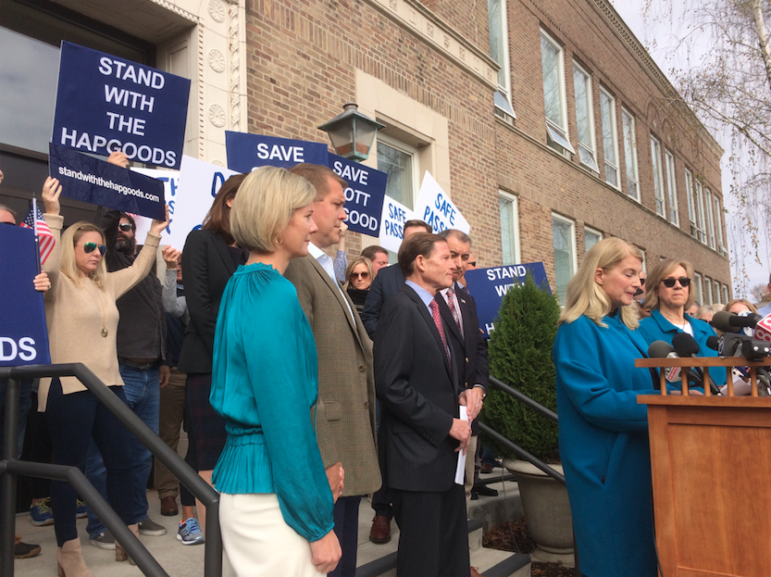 Callie Hapgood held her husband Scott Hapgood’s hand through the news conference, until he went to the podium to speak himself, in front of a dozen microphones and about as many TV cameras, about 20 reporters and roughly 90 supporters. Pictured here, from left are the Hapgoods, U.S. Sen. Richard Blumenthal, state Sen. Carlo Leone, First Selectman Jayme Stevenson and state Rep. Terrie Wood.

Hapgood said this, read from a prepared statement:

As incredibly difficult as the last six months have been, there are days like this when I’m reminded how much support we have from friends, family our community and our elected officials. [….]

“We’d also like to thank White House counsel for their attention to this matter.”

“And I’d personally like to thank this wonderful community, including kids — at this point his voice momentarily cracked with emotion — friends, teachers and schools. Your support gives my family strength as we go through this ordeal. We’re still in shock that a simple vacation that we looked forward to for so long turned into a nightmare. 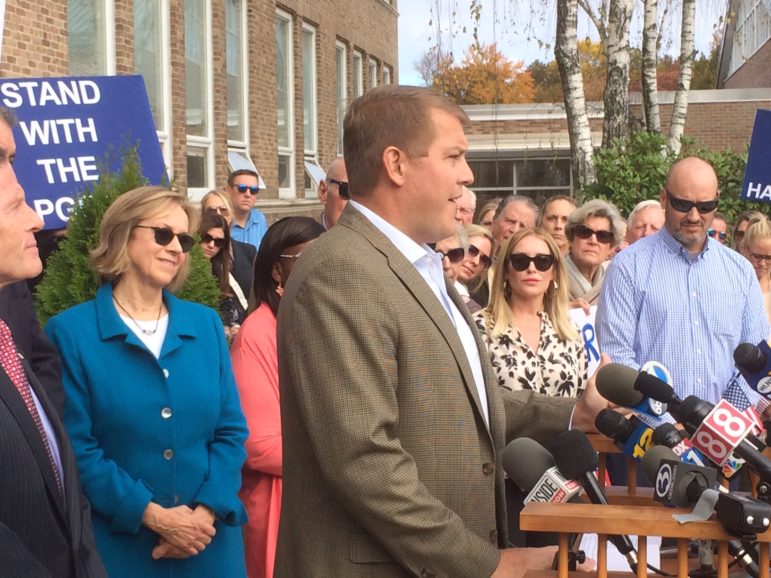 Scott Hapgood, speaking Monday morning in front of Darien Town Hall at a news conference, with his supporters around him and public officials at his back.

“All we wanted to do was vacation as a family. This nightmare is my new reality. I have not been allowed to return to work, where I’ve worked for over 20 years. I have bee disqualified from coaching my kids’ sports teams, which gave me a sense of purpose. I go back and forth to Anguilla in the face of significant dangers to make sure that the facts come out, because the hard science shows what really happened.

“My lawyers have made requests, which I repeat here, asking that the Anguillan prosecution takes a fair view of the facts which point to the logic that charges against me should be dismissed. I’d like to thank everyone for coming and for your continued support. Thank you.”

The time stamp on this article, originally published at 1:38 p.m., has been changed for better placement in the Darienite.com newsletter.