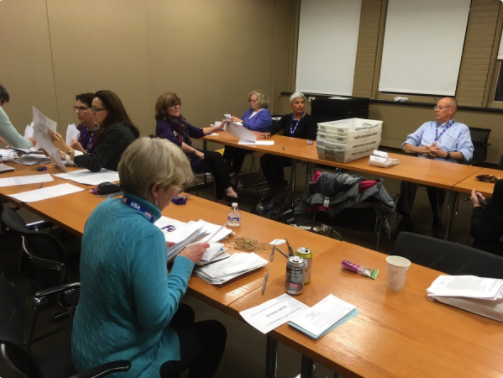 10:35 p.m.: In the presidential race, we’ve reported that Clinton won the most votes, with an outright majority of 5,774 to Trump’s 4,601. The Libertarian Johnson-Weld ticket won 575 votes, and the Stein-Baraka ticket won 75 votes.

— Darienite.com will have more information on the vote tallies on Wednesday.

Clinton won every district, with one giving her a much smaller margin and one a greater margin:

10:26 p.m.: In the Darien Board of Education election, here are the vote totals:

10:14 p.m.: Darien’s “tape” voting totals are out now (minus write-in votes and hand counts for damaged ballots). Representative Town Meeting candidate numbers have not yet been announced here, but everybody running won. Candidates in Darien (more numbers will be added later):

9:07 p.m.: In a little less than half an hour (about 9:30 p.m., maybe sooner), the total “tape” vote will be posted, Democratic Registrar Kathy Hammell says.

Those numbers will not include write-in votes (including votes for four write-in candidates for the Representative Town Meeting) and any ballots that need hand counting because they were wrinkled or damaged, she said. Those other totals will be given out much later (Darienite.com will try to report on the total with those included on Wednesday.)

7:59 p.m.: As the polling stations get ready to close their doors at 8 p.m., Republican Registrar John Visi said turnout’s been high in Darien as it has across the state, and the number of absentee ballots this year went through the roof.

There are normally 200 or 300 requests for absentee ballots in Darien, he said. In this election year it’s been roughly 1,800. It’s been a huge number, Town Clerk Donna Rajczewski confirmed.

Here’s the turnout as of 7 p.m., according to the Registrars Office: 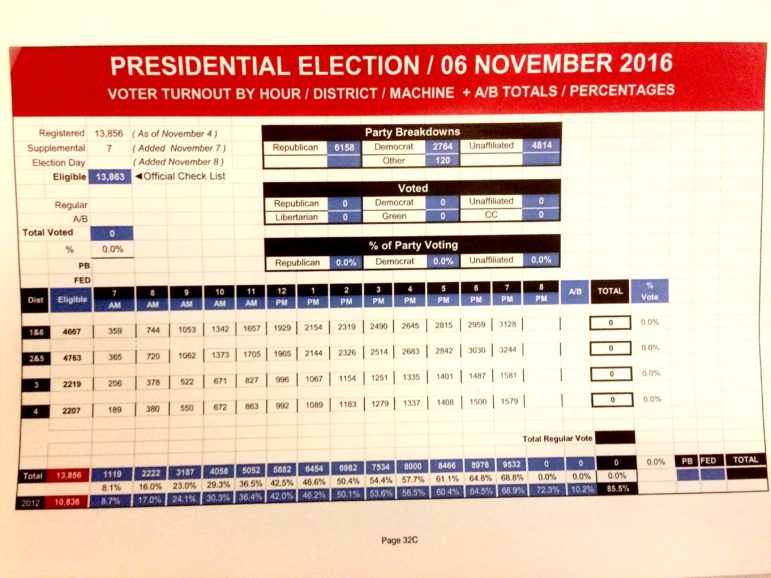 Registrars\’ tally of voting by polling place, as of 7 p.m., as posted in Town Hall.

Here’s a photo from the Darien TV79 Twitter feed, which has been posting some great pictures of Darien’s Election Day: