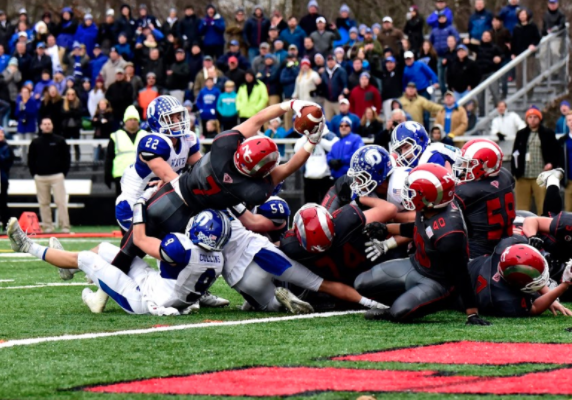 It was one of the most memorable chapters in a long and storied rivalry—a rare high school football game that not only lived up but exceeded its hype as the top-seeded Darien Blue Wave escaped New Canaan with a breathtaking 37-34 overtime win over the No. 2 Rams Thanksgiving afternoon in front of nearly 5,000 fans at Dunning Field.

Darien senior co-captain Finlay Collins was named the game’s MVP, rushing 10 times for 87 yards and two touchdowns and sealing the Wave’s breathtaking win with an interception of New Canaan quarterback Drew Pyne in overtime at the Wave five-yard line.

“Hats off to New Canaan, they played a hell of a game.” Darien head coach Rob Trifone told NewCanaanite.com. “To be down 24 in this magnitude of a game and keep you composure … Hats off to Lou Marinelli and the New Canaan Rams.”

The win was the fifth straight Thanksgiving victory for the Blue Wave (10-0), who now turn their attention to the Class LL state playoffs where they will remain the top seed. With the loss, New Canaan (9-1) could slip as low as No. 3 in the Class L bracket, pending the outcome of several Thanksgiving Day games.

The Rams loss came despite a furious second half comeback, which saw New Canaan— plagued by penalties and turnovers—erase a 34-10 third quarter deficit and tie the game at 34 in the waning seconds of regulation. In overtime, both teams received the ball at the 10-yard line, where Darien was able to convert a Riley Stewart 24-yard field goal to go up 37-34. New Canaan had a shot to win the game with a touchdown, but Collins picked off Pyne’s screen pass to end the game.

“I couldn’t be more proud of my team right now,” New Canaan senior co-captain James Freyre said. “Down 17 points in the fourth quarter, almost every other team in the state would have just laid down and died. We just kept fighting and our defense made adjustments. We played a perfect second half and fourth quarter. Even though it’s hard to take, I’m going to remember that.”

The two teams seemed to set the early tone of the game from the outset, as a roughing the punter penalty on New Canaan gave Darien new life after the Rams forced a three-and-out. Two plays later Collins took a draw up the middle, running untouched for a touchdown and a 7-0 Wave lead a little more than a minute into the game.

After forcing a New Canaan three-and-out, the Wave took their ensuing possession 66 yards in nine plays, capped off by a nine-yard Nick Green run to go up 13-0 with 5:30 left in the first.

On New Canaan’s next drive, the Rams converted two third downs, marching down to the Darien 2. An illegal substitution call backed New Canaan up and after being unable to convert, they had to settle for a 25-yard Grant Morse field goal, cutting the Wave lead to 13-3 with less than a minute to play in the opening quarter.

A 77-yard touchdown run by Graham Braden pulled the Rams to 13-10, but Darien answered right back as quarterback Brian Peters hit a wide-open Max Grant on a 65-yard bomb, going back up by 10 with 8:58 left in the half.

Four minutes later, Collins had his second TD run of the game, as his 2-yard dive capped off a short Darien possession and gave the Blue Wave a 27-10 halftime advantage.

Darien seemed to put the game away in the second half as senior co-captain Cord Fox recovered a Pyne fumble at the New Canaan 14 and ran it in the rest of the way, putting the Wave up 34-10.

A 16-yard Pyne to Quintin O’Connell hookup pulled the Rams to within 34-17 with 31 seconds left in the third.

And a one-yard Spencer Williams dive capped off a nine-play, 83-yard drive that saw Pyne—who finished the game throwing for 223 yards on 24 of 34 passing—complete seven consecutive passes to march the Rams down the field. The Rams trailed the Wave, incredibly, 34-27 with 4:09 left to play.

Meanwhile, the New Canaan defense held the Wave offense in check, allowing only three first downs in the second half. The Rams forced the Wave to punt again, and the offense set up shop at their own 44-yard line with 2:58 remaining in the game.

Four consecutive Pyne completions set New Canaan up with a first-and-goal at the Wave three-yard line. After three attempts to pound the ball in, the Rams found themselves with a fourth-and-goal at the one-inch line. Senior co-captain Ryan O’Connell—relegated to defensive duty for most of the game—took it in from there. Following Morse’s fifth extra-point of the game, New Canaan had completed the comeback, scoring 24 unanswered points in the second half with 21 seconds left in regulation, ultimately forcing the game to overtime tied at 34.

“We left it all on the field,” Graham Braden said. “It didn’t happen the way we wanted it to. I had to play my whole high school career watching this game play out the same way. It’s a good learning experience for the team and it will definitely help us in states.” 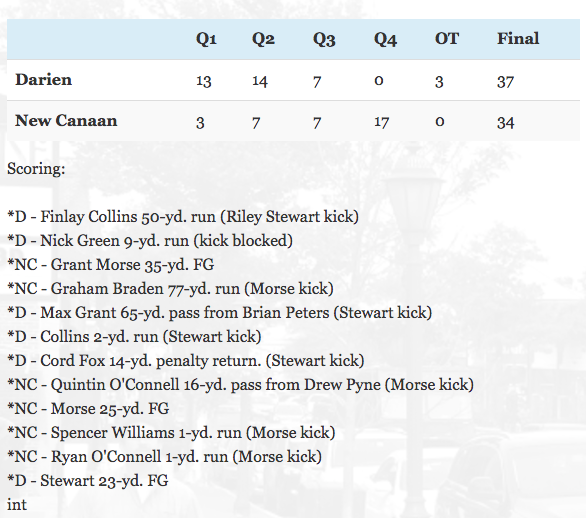 Information and table from NewCanaanite.com 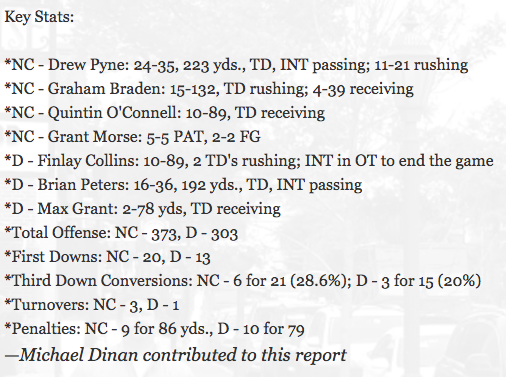 —Michael Dinan contributed to this report