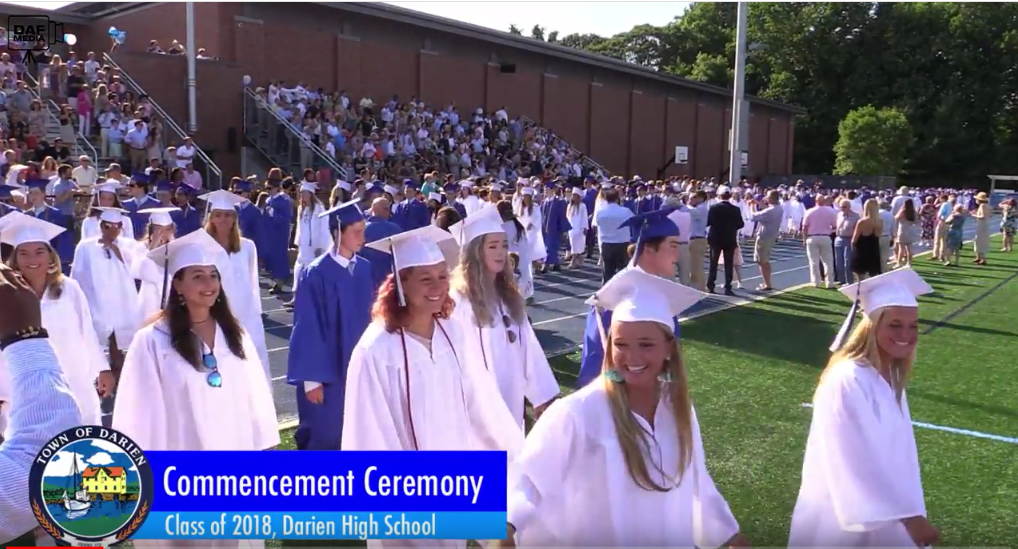 The processional, marched to the tune of Elgar's "Pomp and Circumstance," started off the ceremony.

Students and school officials at Darien High School’s graduation ceremony on Thursday gave the Class of 2018 plenty of advice, with humor on the side, occasional moving moments to add to the traditions of robes and marching, the throwing of mortar boards and the receiving of diplomas.

The sun shone bright and hot, the speeches were relatively short and the ceremony appeared to have gone as planned — but the speeches had their own original touches on common themes. 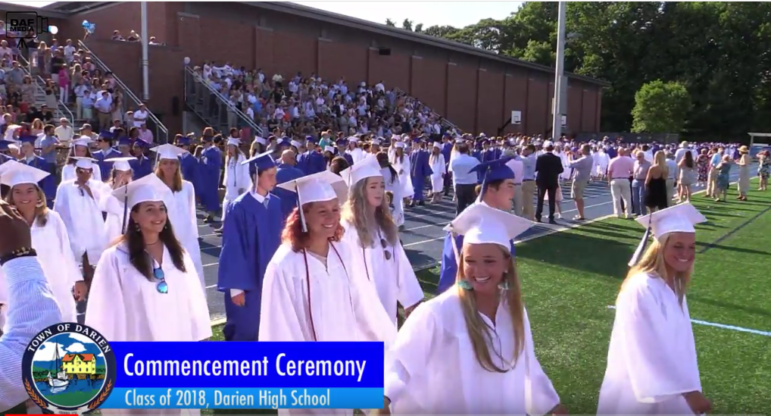 The processional, marched to the tune of Elgar’s “Pomp and Circumstance,” started off the ceremony.

Here’s a sampling of what the speakers said:

Darien Public Schools Superintendent Dan Brenner, at presumably his last Darien High School graduation as he leaves for the United Nations International School, asked grandparents in the crowd to stand up, and then, parents who were attending the first graduation of any of their children, and other parents.

“This is a day of celebration,” he said, “one that is filled with may emotions, not the least of which is pride.” 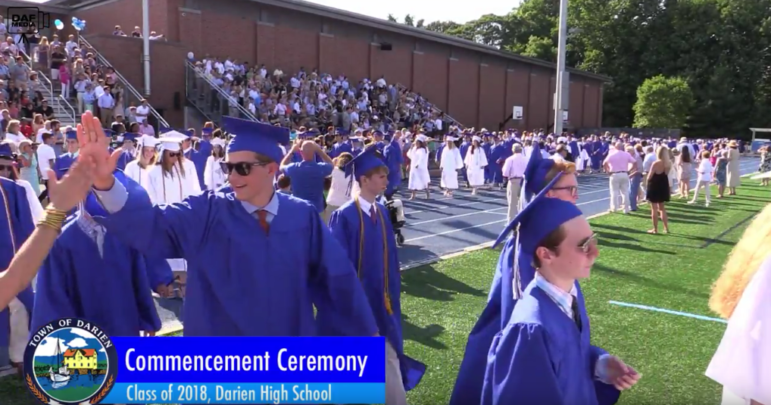 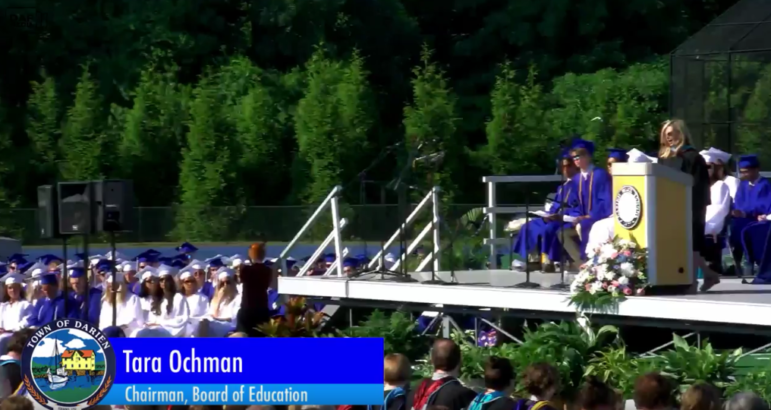 Ochman and the about-to-be graduates

Board of Education Chairman Tara Ochman

Each of the students traditionally gives a token gift to the DHS principal just before getting the diploma. This year they were jigsaw puzzle pieces. When put together, they'll show a wave. 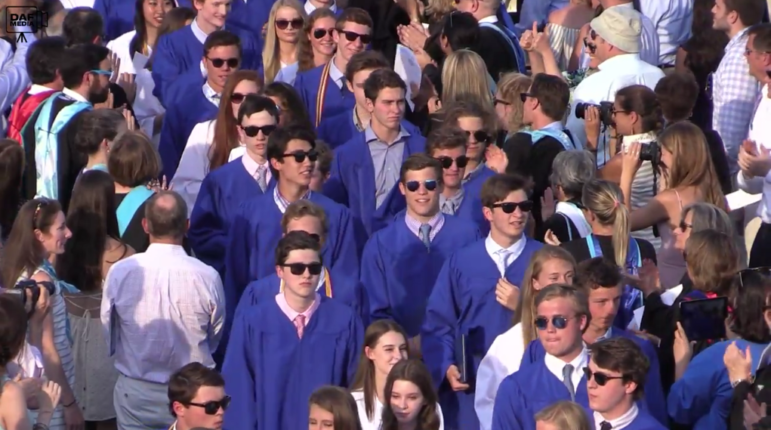 Capless, lined up, graduated,marching out into the world, gotta wear shades

Brenner quoted a Chinese saying, “One generation plants the trees while the next generation enjoys the shade.” He added, “Long ago I learned that graduation is as important to parents as it is to students.”

Gratitude was one of the major themes running through several of the other speeches, as well. Daniel Pfrommer, the class salatutorian, thanked parents and teachers for their help to the students over the years. His gratitude was part of a speech strewn with a plenitude of statistics. Here’s how he summed up:

“During my three and a half minute speech, you will spend a combined two and a half days listening to me talk. By the time this ceremony is over, you will have been here for a total of nine weeks. 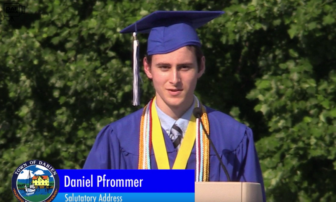 “And what about our parents? They, the real MVPs, cumulatively changed one point two million Class of 2018 diapers, have driven us twenty times to the moon and back, and have collectively donated thirteen thousand years to raising the Class of 2018.

“Parents and teachers, you are awesome. And, as a special gift on behalf of the Class of 2018, I will cut my speech short by a minute, and give you back some of your precious time. Thank you, and have a great summer.”

Board of Education Chairperson Tara Ochman gave the graduating class several pieces of advice: Be curious, be brave, be kind: 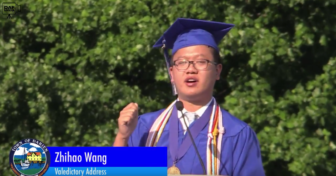 “You will stumble — we all do, and we all will. Work hard. Dedicate yourself to something. But when you slip … learn from [mistakes], push past them and stand back up.”

Valedictorian Zhihao Wang — also known as Alex Wang, and referred to with both names on Graduation Day — told students he’d had some experience failing, and he recommended it to other graduates as an opportunity to experience recovering from it.

When he was in a boarding school for junior high, he said, he was devastated that he didn’t get into any of the private high schools he had applied to. (So instead, he ended up as the valedictorian at Darien High School.)

“For several months, I thought I was worthless,” he said. “When people asked me where I was going to school for the following year, I could hardly open my mouth. […]

“Fortunately, I picked myself up. I realized that it was not the failure itself, but my response to it that truly mattered.”

Juan Perfumo, one of the commencement speakers, exemplified the idea of taking risks that may lead to temporary failure:

“I was born with only half a fully-functional brain, so due to my limitations, I was placed in special education classes. […] My family moved here to the United States from Argentina, so I could get a better education, given that in Argentina there are no special education programs. 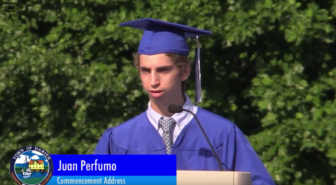 “They moved away from their family with no jobs and no friends, however, I witnessed that the risk they took was worth it, because it allowed me to undergo a complex brain surgery, receive a great education and now even pursue a college degree.”

“Over the course of my career at DHS, I personally took the risk of moving out of more supportive classes to more demanding classes, knowing that I might not handle the challenges, and that I could fail and disappoint myself, my family and my friends. Throughout this transition to these higher classes, I received help from the Planning and Placement Team, and the teachers encouraged me to take the risk.

“I entered DHS attending all special-education and supported classes, and now I am finishing my senior year in all rigorous classes.

“Through this experience, I learned if you take calculated risks, you can get a great reward. My reward was the view others had of me improved, as I did not let my disability define me.”

Perfumo spoke about what inspired him and how grateful he was both to his family and to the high school teachers and community for their support.

Here’s the Darien Athletic Foundation video of the event, from the DAF Media channel on YouTube:

Editor’s note: Many thanks to DAF Media for the images in this article from their live video coverage of the graduation. All of the excellent images for this article come from the video, which DAF Media has provided them for everyone to enjoy.

One thought on “Class of 2018 Graduates With Pomp, Cheers, Humor and Earnest Advice”