The Maritime Aquarium at Norwalk is encouraging residents of Fairfield and Westchester counties to make and share simple observations of plants and animals April 29-May 2 as part of a global bioblitz called City Nature Challenge.

The Aquarium is organizing Fairfield and Westchester counties’ “team” in this four-day international event, which pits metro areas in a contest to make the most observations of nature, to find the most species and to engage the most people.

“We’d love for as many families and individuals in the two counties to make as many observations as they can, even if it’s just for a brief time on one of the four days,” said Bridget Cervero, senior education manager.

“Making observations for City Nature Challenge is more than a fun excuse to get out and learn about the animals and plants in your community,” Cervero said. “The data gives scientists an annual invaluable moment-in-time snapshot of our local and global species.” 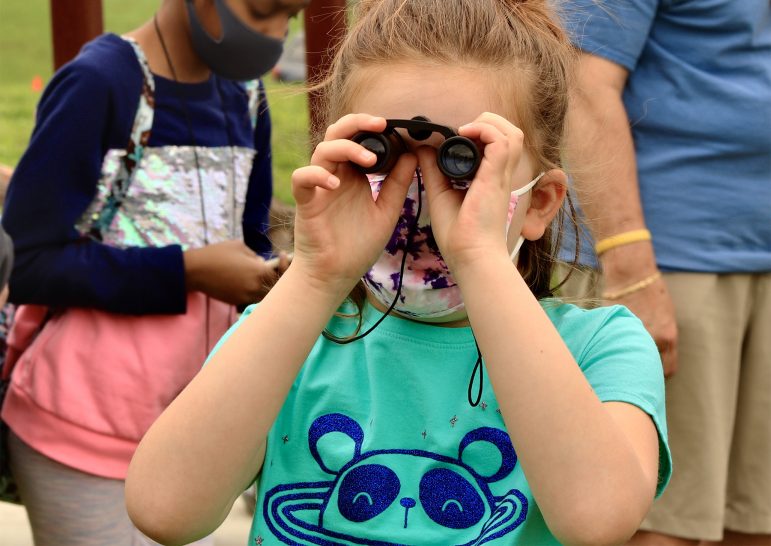 Anyone can participate anywhere. There’s no fee. Simply go outside into nature — to your backyard, your neighborhood, a park, a beach — from Friday, April 29 through Monday, May 2, and look for plants and animals. (Please, no pets or cultivated plants. But evidence like shells, feathers or scat are fine.)

Take a picture of them — even if you don’t know what they are – and upload the observations to the free app/website called iNaturalist. The app may even identify your find.

City Nature Challenge can be a fun and meaningful family activity but please note that children must be 13 or older to register for an iNaturalist account.

Observations even can be made aboard the Aquarium’s research vessel during Marine Life Encounter Cruises on April 30 and May 1 to report the seabirds seen and the animals brought up out of Long Island Sound. The two-hour cruises depart at 1:15 p.m. Cost is $34 per person ($30 for Aquarium members).

Additionally, organizations partnering with the Aquarium for 2022 City Nature Challenge events include the Catherine Violet Hubbard Animal Sanctuary in Newtown, Connecticut’s Beardsley Zoo in Bridgeport, and The Woodcock Nature Center in Wilton.

Interested but want to learn more? Get full details about City Nature Challenge, including an overview of using iNaturalist, during a free virtual workshop led by the Aquarium at 7 p.m., Wednesday, April 20.

City Nature Challenge was started in 2016 as a competition between staff of the Natural History Museum of Los Angeles and the California Academy of Sciences, and has expanded rapidly. Last year, despite the pandemic, 419 cities in 44 countries made 1.27 million observations, documenting more than 45,300 species.

Data collected each year during City Nature Challenge is freely available to researchers on iNaturalist, and observations are used in hundreds of scientific publications.

However, according to City Nature Challenge:

“We usually find the most immediate use of CNC data happens at a local level: a discovery of a new-to-that-place species, someone documenting a population of a rare or invasive species that wasn’t previously known, better understanding of where particular species are in that area, etc.

“So any local governments, parks departments, or other organizations who track biodiversity/invasive species/rare species in the area that are involved in the City Nature Challenge will likely use the data produced to make more-informed management decisions.”

Learn more about making observations for the Fairfield/Westchester team — and register for the April 20 workshop — at this Web page on The Maritime Aquarium website.

And learn more about the global bioblitz, here.