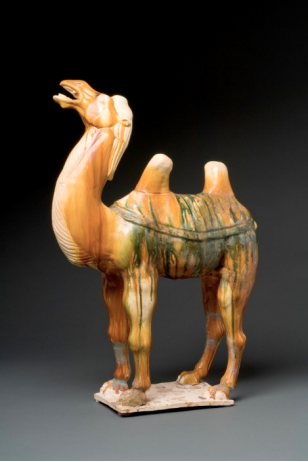 “Buried Treasures of the Silk Road,” an exhibition of ancient Chinese tomb sculpture opens this Saturday, Feb. 9 at the Bruce Museum.

Featuring dozens of rare and delicate terra cotta figurines, painted and glazed ceramics, and other antiquities, the exhibit will be on view in the Greenwich museum’s Arcade Gallery through June 2, 2019. 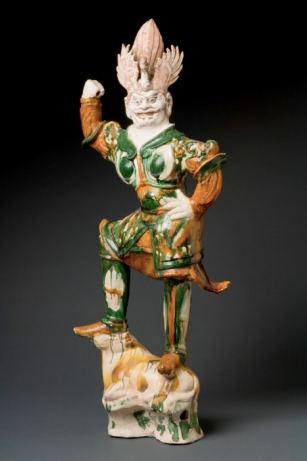 — an announcement from the Bruce Museum

Buried Treasures celebrates the artistic achievements of anonymous Chinese artists supported by the riches earned on the Silk Road.

The exhibition will also feature art objects from the museum’s permanent collection exchanged on the Silk Road.

“When we in the Western world think of ancient art, we tend to focus on Greek and Roman culture,” said Fred Brooks, a longtime Greenwich resident who, with his wife Jane, has spent decades collecting Chinese ceramics, notably ancient tomb art.

The Brooks donated that collection to the museum.

“But all through that period of time, the Han Dynasty also had a great empire, and art was central to their lives — and more important to the leaders, their afterlife.”

During the period of peace and prosperity of the Han Dynasty (206 B.C.E. to 220 C.E.), considered the Golden Age of China, emissaries ventured from China into Eurasia. Merchants soon followed, laden with polychrome, patterned silk — a luxury never seen outside of China.

In time, these merchants transported other exotic goods, including lapis lazuli and other precious metals, furs, and ivory on the backs of camels, donkeys, and horses to ever more distant markets, extending the range of trading partners along the way. 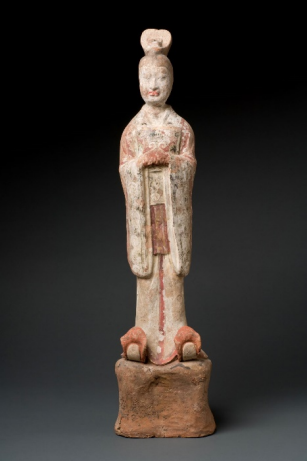 The exhibit at the Greenwich museum showcases the extraordinary collection of Chinese tomb sculpture in the Fred and Jane Brooks Collection of the Bruce Museum.

Evolving into a network of overland and water routes that stretched thousands of miles across China and Central Asia to Eastern Europe, the Silk Road introduced and formalized the practice of international trade.

During both the Han and Tang dynasties, mortuary rites and customs were important elements of Chinese culture.

Wealthy citizens expanded on the tradition of furnishing their massive burial chambers with numerous and elaborate art objects.

Grave goods, called mingqi or “spirit goods,” indicated the status of the person on earth and were interred for use in the afterlife.

The materials and stylistic elements of grave goods reflect the way artists and craftsmen embraced the multicultural influences that entered China via the Silk Road.

In light of the current Chinese government’s efforts to restore and revive this ancient trade route, this exhibition has a special topicality, said Kirsten Reinhardt, museum registrar and the organizer of “Buried Treasures.”

“For more than one thousand years, from 206 BCE until 907 CE, Chinese emperors dealt with the same issues that are in the news today: international trade treaties, tariffs, border walls, nationalism, and immigration,” Reinhardt said.

“Through military strength, diplomacy, and technological advancements China developed, controlled, and prospered from commerce on the Silk Road. Everything old is new again.”

Programs Related to the Exhibit

To complement this exhibition, the Bruce will present a series of docent tours and related programs.

Lecture on the Collection of Chinese Tomb Art

On Wednesday, February 27, 1 to 2 p.m., Kirsten Reinhardt will give a Curator’s Talk on the Fred and Jane Brooks Collection of Chinese tomb art, as well as objects and antiquities from the permanent collection featured in the exhibition. The talk is free to museum members and visitors with paid admission.

On Monday, March 18, 10:00 – 11:00 am, Virginia Bower, Adjunct Professor at the University of the Arts in Philadelphia, will discuss “Of Camels and Kings: The Silk Road and Tang Dynasty Tomb Sculpture.” This talk is free to museum members; $10 for non-members.

Lecture: ‘Providing for the Afterlife in Han Dynasty China’

On Thursday, April 18, 6:00 – 8:00 pm, David Ake Sensabaugh, former Ruth and Bruce Dayton Curator of Asian Art at the Yale University Art Gallery, will present “Providing for the Afterlife in Han Dynasty China,” speaking to the ways in which Han Dynasty tomb furnishings reveal beliefs in the afterlife as well as illuminate aspects of daily life.

The evening lecture is free for museum members and students with ID; $15 for nonmembers. Reservations are required for all programs and may be made online at the museum website.

The Bruce Museum is grateful for support of this exhibition from The Charles M. and Deborah G. Royce Exhibition Fund and the Connecticut Office of the Arts, as well as for the ongoing generosity of Fred and Jane Brooks in sharing these buried treasures with the public.

About the Bruce Museum

The Bruce Museum is located in a park setting just off I-95, exit 3, at 1 Museum Drive in Greenwich, Connecticut. The museum is also a 5-minute walk from the Metro-North Greenwich Station.

The museum is open Tuesday through Sunday from 10 a.m. to 5 p.m.; closed Mondays and major holidays. Admission is $10 for adults, $8 for seniors and students with I.D., and free for members and children less than five years.

Individual admission is free on Tuesday. Free onsite parking is available and the museum is accessible to individuals with disabilities. For additional information, call the Bruce Museum at 203-869-0376 or visit the museum website.