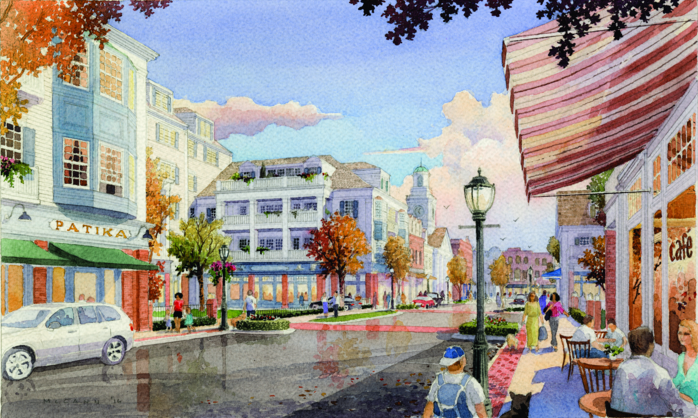 The view down Market Lane, from about the middle of Corbin Drive, looking southwest toward I-95. The building with the copula faces the proposed Town Green.

Is five or six stories just too high for a Darien building, even downtown? Or will those buildings loom less over downtown and nearby homes than some fear?

Those questions were behind a lot of the discussion Tuesday night at the Planning & Zoning Commission’s last public hearing on a zoning change proposal that would allow higher structures on the triangular site bounded by Corbin Drive, the Post Road and Interstate 95.

In a slide presentation from developer David Genovese and his team, the commission saw sketches showing how high the buildings would appear from various angles downtown, some as far away as Darien Library and the intersection of Brookside Road and the Post Road.

The commission members also asked questions about how much height was needed for multi-story buildings, how many parking spaces would be provided. Questions about traffic and other elements of the proposed redevelopment will wait for a site plan to be proposed which would give many more specifics, including a traffic study. 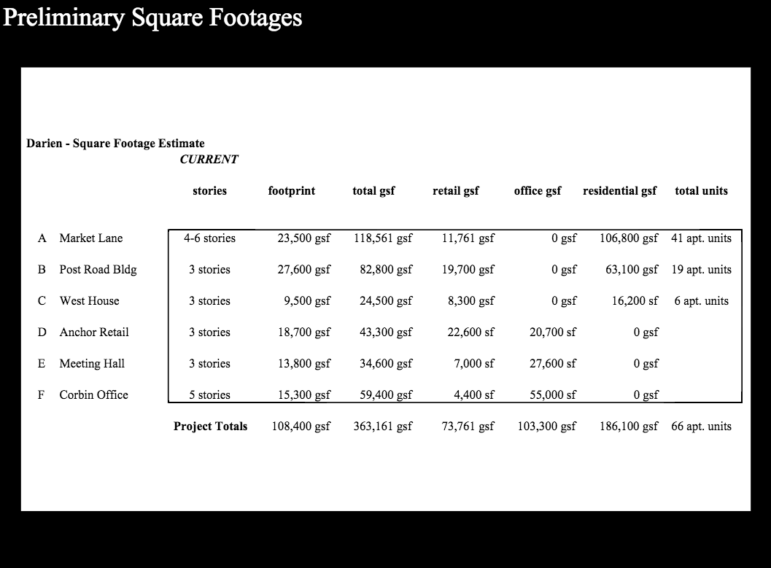 A preliminary idea of how much space would be devoted to residential, office or retail purposes for each building or set of buildings in the development. “GSF” means “gross square feet.” (image from the presentation)

In return, the town would get a half-acre “Market Green,” much like a town green, and other benefits from the development. The Market Green would be more feasible if some of the buildings in the development were higher, Genovese has said.

Darien zoning regulations measure the height of a building from the ground to the mid-point of sloped roofs (or to the top of the roof for flat-roofed buildings). Mechanical equipment on roofs, such as restaurant ventilation structures and air-conditioning machinery, aren’t included. Neither are copulas and similar decorative elements.

The highest building in Darien currently, Planning & Zoning officials said at the meeting, is the Bank of America building near Exit 11, which the developer wants to replace.

Baywater Corbin is proposing these allowed heights and allowed number of floors above ground for buildings in the development: 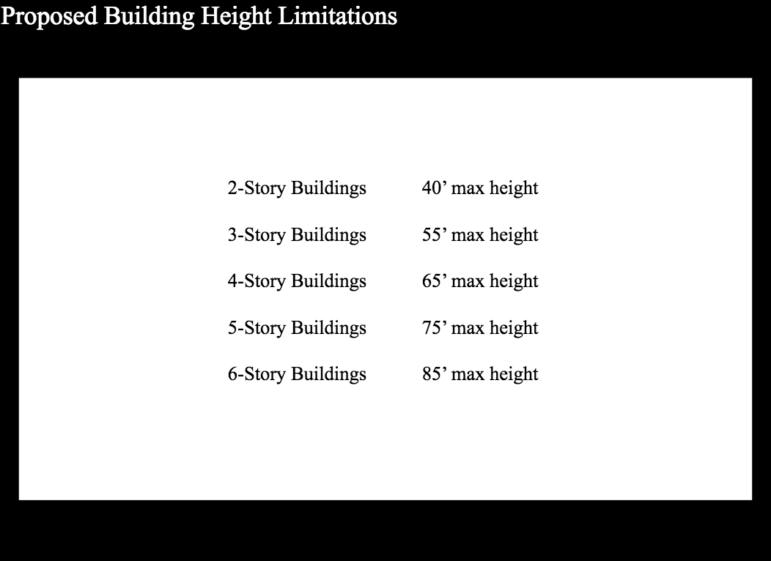 From the July 12 slide show presented by Baywater Corbin before the P&Z Commission.

When P&Z Commission members questioned the development team, they were told there was some leeway in the height numbers. Except for the building for the anchor store (where Bank of America is today), retail space would be limited to the first floor. Genovese said that the market for retail real estate demands high ceilings, and there would have to be additional space for utilities between each floor.

That would amount to 28 feet for a two-story building, plus perhaps several feet for a sloped roof (measuring to the midpoint between the top and the eaves), or about 32 feet total. The zoning change is proposing 40 feet. The same calculation would mean the developers would need 68 feet for a five story building (the proposed zoning change calls for 75 feet).

Some insulation would require space above the ceiling of the top floor of a building, Genovese said, and a member of the development team said space would be needed behind or under the pitched roof for “mechanicals” like air ventilation equipment.

Planning & Zoning officials had asked the developers to show examples of other buildings in Fairfield County and beyond, either built or proposed, that are as high as six stories, and Genovese presented quite a few.

His slide presentation included several Greenwich buildings of six and seven stories, a four-story building on a corner in Scarsdale and six-story buildings proposed for a housing development in New Canaan. 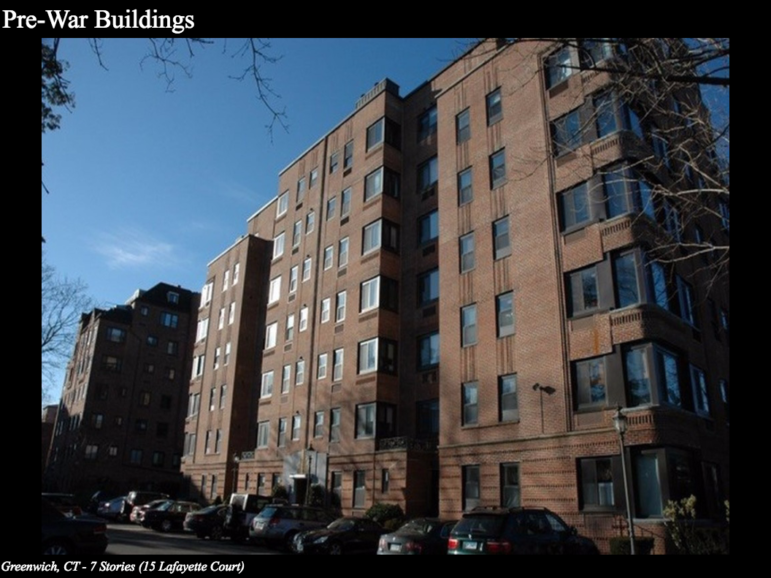 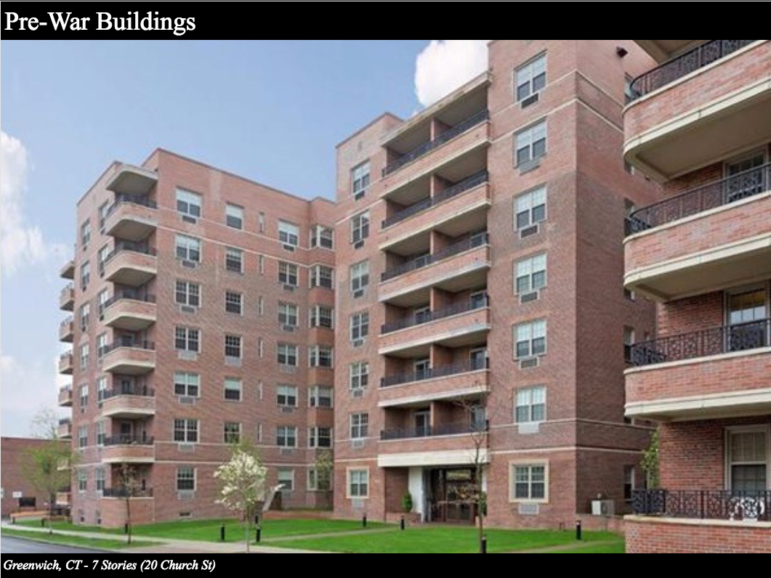 With three floors of garage space and four floors of office space, this building in downtown Greenwich is close to Interstate 95 at Exit 3 and has more floors than any proposed in the Corbin/Post Road development, Genovese pointed out. (image from the presentation)

This building in Scarsdale is right up against the street, with high ceilings on the first floor. (image from the presentation)

image from the presentation

This proposed or planned building would be located near the Fairfield Metro railroad station. (image from the presentation)

All of the buildings in this development proposed for New Canaan would have several stories, and no public park space is proposed, Genovese said. (image from the presentation) 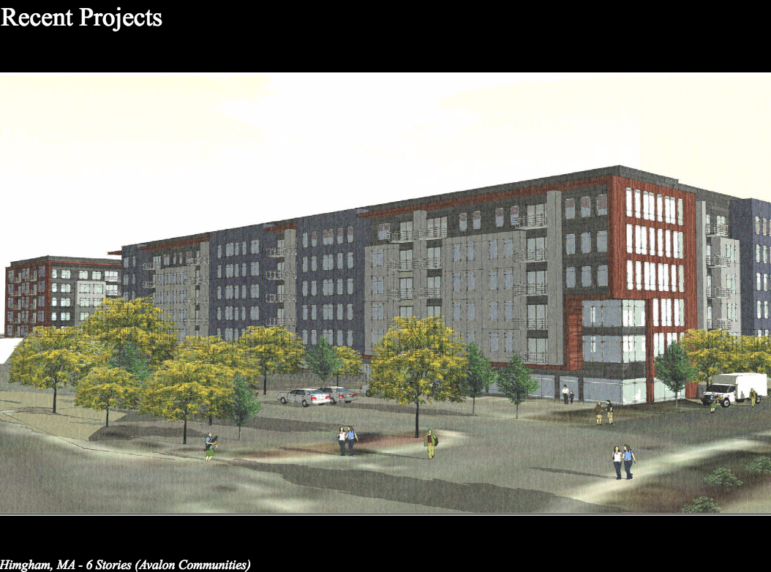 Another person who got up to speak at the public hearing pointed out that some of those buildings were in towns (like Greenwich and Fairfield) larger than Darien. Scarsdale has a somewhat smaller population than Darien (although the town is about a half the size and about three times the population density). New Canaan has almost the same population as Darien.

Genovese and Brewer pointed out that the higher buildings in the development are set back from the outer edges of it, and the view of them is largely blocked by shorter buildings closer to Corbin Drive and the Post Road.

What Would Buildings That Tall Look Like from Various Places?

Commission members had asked the developer to create sketches reflecting calculations of how high the buildings would appear from various locations around downtown.

Here are the sketches from the slide presentation: 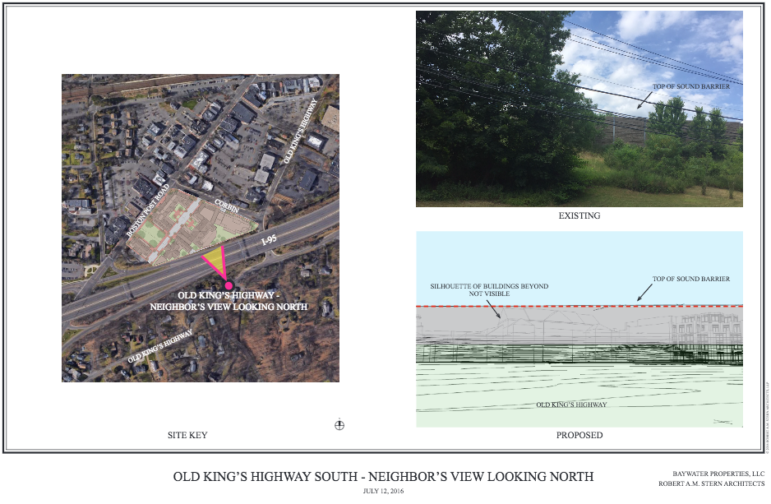 View from a house on Old Kings Highway South, across the highway. The sound barrier blocks all of the proposed buildings, even the five- and six-story buildings. (from the presentation) 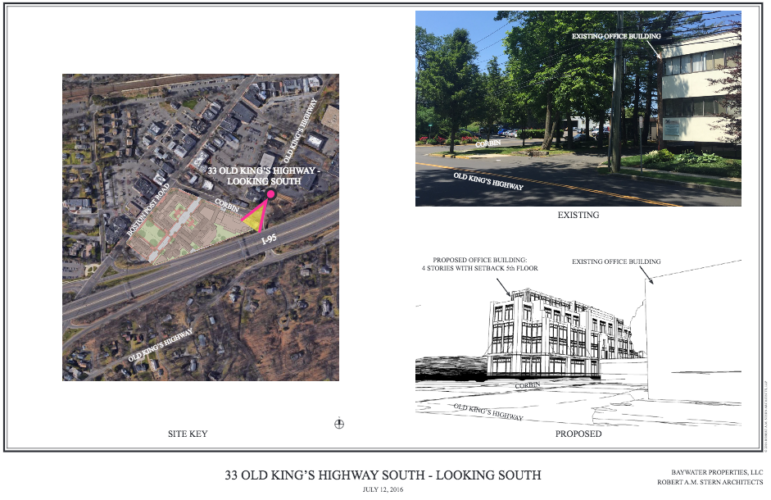 The view from Old Kings Highway South just east of its intersection with Corbin Drive. (from the presentation)

The view from just outside Dunkin Donuts, near Darien Train Station. (a slide from the presentation)

Another view (from the presentation) 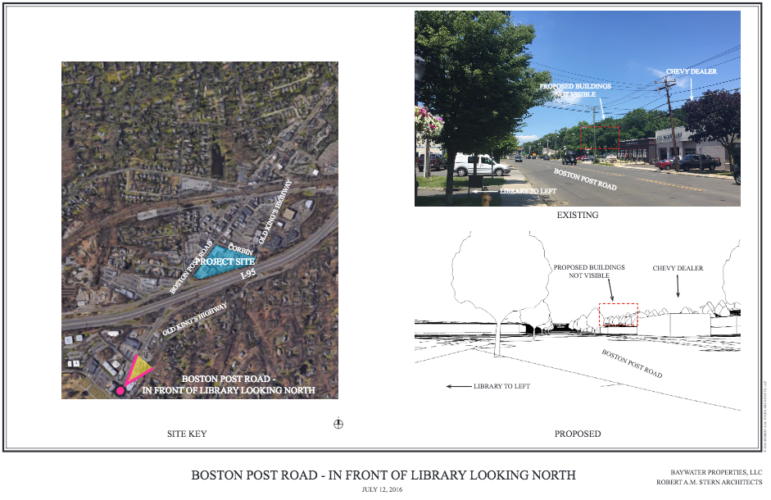 View from the Post Road near Darien Library (from the presentation)

Cindy Hampton of Old Kings Highway South pointed out to the P&Z Commission that the sketch showing the I-95 highway barrier blocking the view from a home on Old Kings Highway was from one of the lowest houses on that street. As the street went uphill from there, people could see the buildings from their homes.

Cameron agreed with that. For homes at higher elevations on Old Kings Highway South, “I don’t see how you’re not going to see this building,” she said.

In discussing another sketch, Cameron pointed out that trees hiding the buildings from view near Darien Library would not hide them in the colder months, when leaves had fallen. Architect Gary Brewer of Robert A.M. Stern Architects agreed that the buildings would likely be visible from that perspective during those months.

Genovese gave a light-hearted twist to a summary version of why the development would be good for Darien, giving a David Letterman-like countdown of 15 points: 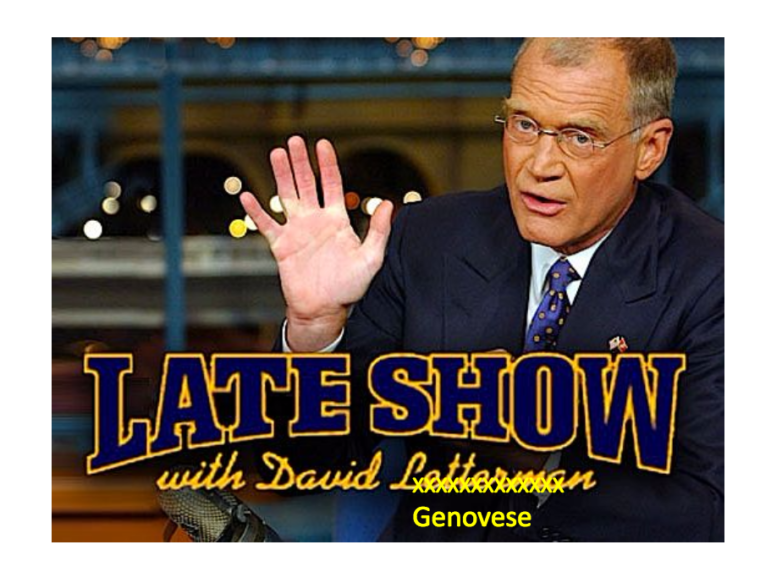 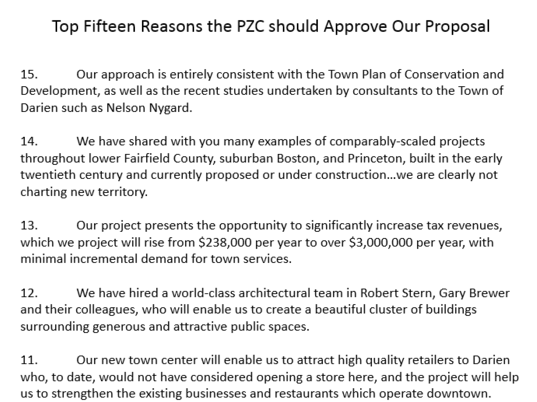 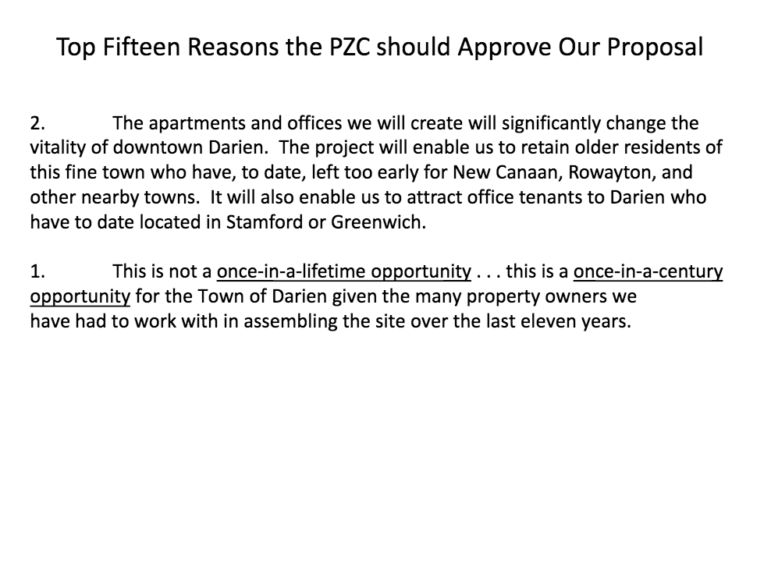