Darien native Dan Micciche, current musical director for Wicked on Broadway, is bringing Broadway to Darien on Dec. 19 with a concert at Noroton Presbyterian Church.

Broadway performers from The Phantom of the Opera, Wicked, Hamilton, and Disney’s Frozen, alongside members of the NPC Chamber Choir and Orchestra, will perform holiday favorites.

The free concert, performed with COVID-19 safety protocols, will be open to the public and livestreamed on the homepage of Noroton Presbyterian Church at 6 p.m., on Sunday, Dec, 19.

— an announcement from Noroton Presbyterian Church

“We could all use some joy this Christmas season and this concert will certainly do just that,” Micciche said. “The Broadway community is eager to perform, and audiences are hungry for it.”

This is the second concert Micciche, a member of DHS Class of 2003, has performed in at the church.

“Noroton Presbyterian Church is excited for one of our own, to return home again to share his gifts with our community,” said NPC’s senior pastor, Greg Doll. “We are delighted to be able to extend this musical offering to the Darien community (and beyond) in a year when we could all use some hope and joy.” 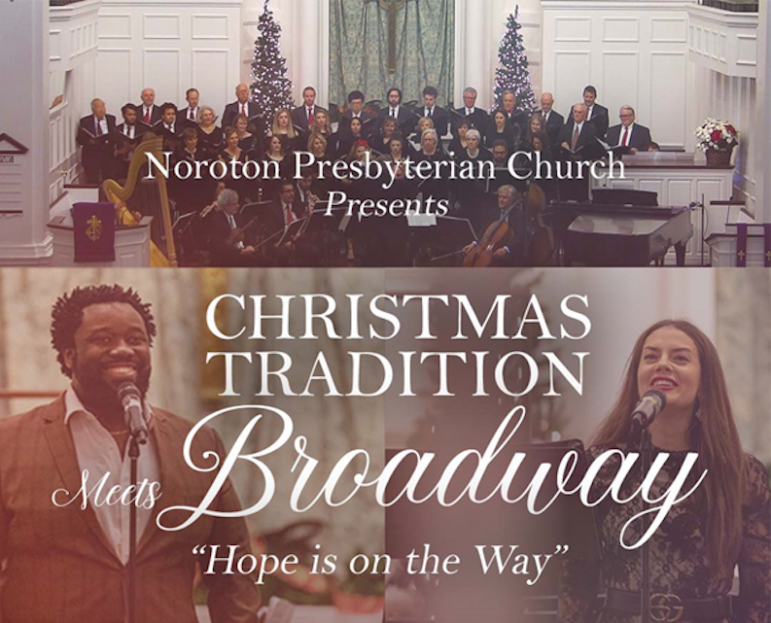 The performance is under the musical direction of Micciche and Dwayne Condon, Noroton Presbyterian’s director of music and fine arts.

“What a joy it is to have this collaboration with these amazing Broadway musicians and our fine NPC singers and orchestra,” Condon said. “My prayer is that all who watch this event will experience the thrill of hope and ponder what the light of Christ has brought into this dark world.”

Meghan Picerno (Phantom of the Opera) hand-picked by theater legend himself, Hal Prince, Meghan was honored to make her highly-anticipated Broadway debut as Christine Daaé in Phantom of the Opera (where she was nominated as Broadway Replacement of the Decade, Broadway World) after delighting audiences with her performances as Christine on the world tour of Phantom, and in the U.S. premiere/first national tour of Love Never Dies.

She has performed in concerts at Royal Albert Hall, San Francisco Symphony, Lincoln Center, Carnegie Hall and Theatro Municipal de São Paolo. You can follow her on Instagram, @meghanpicerno; Facebook,  @meghanpicernocoloratura; and on her website, meghanpicerno.com

Eryn LeCroy (current Christine Daaé alternate in Phantom of the Opera) was thrilled to make her Broadway debut with Phantom!

Tamar Greene (current George Washington, Hamilton) After a year and a half in the Chicago company, Tamar is blessed and grateful to continue his run as George Washington in the Broadway company of Hamilton! Off-Broadway: Show Boat(Lincoln Center/PBS), The Golden Apple (NY City Center). National Tour: George Washington (Hamilton), Love Never Dies, Fisherman (The Gershwins’ Porgy and Bess), Quartet Leader (After Midnight).

He has also appeared as Cinderella’s Prince in Into the Woods (Town Hall), The Secret Garden in Concert (Lincoln Center), soloist with the Cincinnati Pops. His appearances on TV include “The Late Show with Stephen Colbert,” “One Life to Live.”  He has also performed in recordings: Frozen, The Visit, John Kander’s Hidden Treasures. You can follow him on Instagram @thejohnriddle.

Dan Micciche is the current music director/ conductor of Wicked on Broadway. He has been with the show for six years and counting, including the national/ international tour. For his first six years living in New York City he started out as an actor and played Mary Sunshine in Chicago for 2,000 performances on Broadway, as well as the national tour and with the Japanese and Thailand companies.

He’s performed at Carnegie Hall and at the Kennedy Center in Bernstein’s Mass, and in recordings of  Bernstein’s Mass (Grammy nominated in 2008) as well as many acts at 54 Below shows for Broadway stars.

He’s presented workshops at Stu for Silverton, masterclasses at major universities and colleges and colleges and taught as a voice coach in New York City and Connecticut. He is a member of the Class of 2007 at the Boston Conservatory of Music. You can follow him on Instagram @danmicciche.

Bryan Murray is a classically trained baritone with a master’s degree from the Yale School of Music. Bryan has sung in theaters around the world, including in Germany, Italy, and Japan, but Vespers at Noroton is his favorite place to be.

Olivia Manna is a classically trained mezzo-soprano, and a recent graduate of Purchase Opera. Olivia has recently performed with NYC-based opera company Teatro Grattacielo, and is so happy to be singing with her Noroton family again this holiday season!

Noroton Presbyterian Director of Music Dwayne Condon, a prolific recording musician has sung on nearly 150 major motion pictures including Independence Day, The Matrix, Polar Express, Men In Black, King Kong, and Jurassic Park 3. As a conductor, orchestrator, and singer, Mr. Condon has also contributed to a number of video game soundtracks released by such developers as Microsoft and Ubisoft.

Jenifer Menedis has had a lifelong career recording and performing nationally and internationally including some famous jingles, the internationally known tribute band, Bjorn Again, and was featured as the lead Andrews sister in the Clint Eastwood feature film, Flags of Our Fathers.

Siblings, Nicky and Sophia Condon, in addition to their TV and movie credits, toured as background vocalists for Jon Anderson, the lead singer of the iconic prog-rock, YES. They are currently members of the Tutor Singers of Darien High School.

“We hope that this concert feeds your soul and brings you some Christmas cheer,” said Doll, the senior pastor.