You are invited to the “Last Hurrah” for Arguimbau Art Gallery in downtown Greenwich (The building is for sale). Visit Darien native Peter Arguimbau at this location before the gallery moves.

Peter Arguimbau is an American painter, restorer and historian of classical art. Come view his work and that of visiting artists

Arguimbau’s subject matter includes portraits, animals, and landscapes, but is notorious for his classical marines.

Peter’s father, Vincent, was a portrait painter who started to develop his son’s skills at an early age. 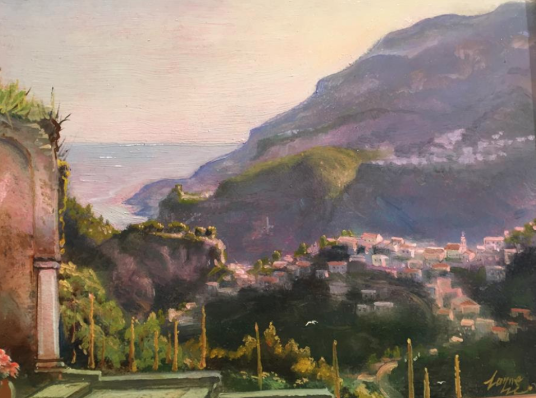 In 1958, a colleague of Vincent’s came to the Arguimbau’s home to concoct a 17th century paint formula known as the Maroger Medium, all under Peter’s watchful eye.

The old masters used these gel mediums to glaze a spectrum of oily-resinous colors, which led to the Golden Age of Art. Following this nascent realization, Peter began a lifelong pursuit of the technique and study of Renaissance painting.

Born in Darien in 1951, Peter lived with his family between Scotts Cove and Seville, Spain. After attending Loomis Chaffee and Vassar College, Peter went on to study under Frank Mason at the Art Students League of New York for 14 years.

He then traveled abroad for a three-year classical study of the Baroque Era in Florence, Rome and Naples, as well as Hellenistic Classicism in Athens, Olympia, and Delphi.

He learned the techniques of the old masters by copying paintings from museums throughout Europe and America.

After a decade spent testing recipes from medieval manuscripts with restorer Pierro Mannoni, Peter continues to grind his colors from powdered pigments and cooks his mediums without relying on industries’ rudimentary products.

The focus of his life’s work has been applying his skill through his love of the sea, which he views from S/Y Molly Rose, a 30-foot Catboat built in 1935. He lectures regularly on the technical evolution of painting since the Renaissance.