— an announcement from Voices Center for Resilience, headquartered in New Canaan

All proceeds will benefit Voices’ work to assist communities preparing for and recovering from tragedy, and to provide long-term support and resources that promote mental health care and wellness for victims’ families, survivors and responders.

Frank Fetchet, Voices vice president of business development, said, “This is our second year at Quaker, and we’re thrilled to be welcomed back. As many golfers know, Quaker Ridge is one of the world’s premier golf courses, and its recent redesign by architect Gil Hanse makes a golf experience at QR second to none.”

This year marks the 20th Anniversary of 9/11 – a milestone that also recognizes Voices for its work in advocacy and social services. 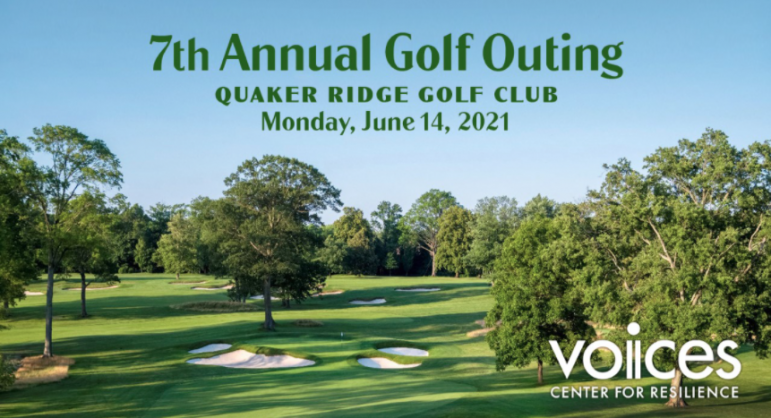 Most importantly, Voices continues to provide a legacy of support with a wide array of services and programs including workshops and webinars on topics such as loss during COVID-19, mental health considerations, and 9/11-related issues.

This Sept. 11, Voices commemorates the 20th Anniversary and honors the 2,977 lives lost, and the over 4,100 that have died since of 9/11 related illnesses. Voices 20th anniversary commemoration programs will reflect on the organization’s nearly two decades of work and will provide support that is needed during this challenging time.

In honor of the anniversary, Voices special programs and events include:

9/11 Living Memorial Honoring Survivors & Responders – For the over 4,100 who died since of 9/11-related illnesses

“Our annual golf outing is an opportunity for us to connect directly with some of our most ardent and loyal supporters while raising funds to continue our work, during this special 20th anniversary commemorative year,” Fetchet said.

“We would especially like to thank our early and generous sponsors POLO Ralph Lauren, Ray Catena Lexus of Larchmont, and Kane 11 socks,” he said. “The outing, given its longevity, is near sellout, so for those who may like to play or put together a foursome, please reach out sooner rather than later to Voices.”

For more information or to become a sponsor please contact Susan Serven at sserven@voicesofsept11.org.

Voices assists communities preparing for and recovering from tragedy and provides long-term support and resources that promote mental health care and wellness, for victims’ families, responders and survivors.

Founded in the aftermath of 9/11, Voices leverages its nearly two decades of experience to share lessons learned and support communities impacted by tragedy, in the United States and abroad.