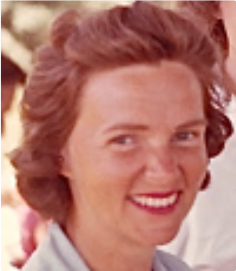 Anna May Shutts Austin passed away peacefully at the age of 97 on Monday, Jan. 27.

Anna May was born in Radnor, Pennsylvania to Mr. and Mrs. Samuel Shutts and raised along with her four sisters in Wayne, Pennsylvania in a home located next door to The Valley Forge Military Academy.

Anna May graduated from Radnor High School in 1939 and then attended Drexel University, where she majored in Home Economics. While at Drexel she met Marshall M. Austin and they were married in 1945.

Initially they settled in Bryn Mawr, while Marshall served in the Marines in the South Pacific, the occupation of Japan, and later, the Korean war.

During this time Anna May gave birth to twin girls, Nancy and Patricia in 1947 and later to Mary in 1951. These years were a difficult time for Anna May (as they were for many) as she was a young mother with small children and a husband away at war.

After Marshall returned from Korea, the young family settled in Darien in 1951, where they lived for the next 30 years. Anna May gave birth to two more children; Jane in 1953 and Katherine in 1956.

Marshall began work with the Kliklok packaging corporation where he spent the rest of his business career. Anna May played an active role in Marshall’s career, by managing home and family, entertaining and accompanying him on business travel.

Despite the demands of raising five children, Anna May was an active volunteer for the Red Cross, and St. Paul’s Episcopal Church in Darien. She was a renowned cook, famous for her pecan pie, chocolate nut crunch, and apple and blueberry pies.

During her years in Darien, Anna May became an avid golfer. She and her husband played regularly, and as his career came to involve international travel, they played at golf courses all over the world. Anna May’s golf career included two hole-in-ones and the Ladies’ Club Championship at the Little Club in Delray Beach, Florida.

In 1968, Anna May became a passionate fan of the New York Mets. She enjoyed many games at Shea Stadium in New York City, and at age 87 attended a game in the new Met’s Stadium, Citifield. She also faithfully rooted for the men’s basketball team at Duke University up until the time of her passing.

After Marshall passed way in 1988, Anna May became a resident of the Willow Valley Manor North, in Willow Street, Pennsylvania. She spent her summers there and lived in her home in Melbourne Beach, Florida during the winters. In 2011, she made Melbourne Beach her full time residence, and lived the rest of her years there. Her home in Florida offered a warm welcome to her children and their families over many years.

A Burial and Memorial Service will be held in her honor in May of 2020 in Malvern, Pennsylvania. For more information and details please email austinkm@gmail.com. In lieu of flowers please send donations to the Alzheimer’s Association.

— an obituary from Brownlie and Maxwell Funeral Service and Crematory