Angela Perna Corbin, mother of Robert P. Corbin of Marlton, New Jersey and Cheryl Corbin Viesto of Darien, passed away on Oct. 11, 2019. She was 92 years old, and had been a resident of Atria Darien since 2014. 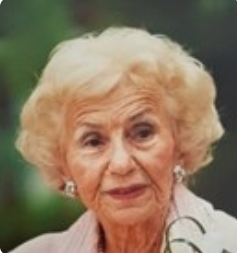 Angela Corbin, 92, passed away on Oct. 11. Services will be private.

Born in Philadelphia on Sept. 6, 1927 to Angelo M. and Mary Perna (nee Guagenti), she grew up in the Overbrook section of Philadelphia. She was an excellent student and accomplished pianist, earning a full scholarship to Temple University where she met her future husband, Robert Brooks Corbin.

She and Bob married in 1948 and began their respective careers — she as a social studies teacher at Springfield High School in Pennsylvania and he in finance for Atlantic Refining Company (later Atlantic Richfield).

Both enjoyed very successful careers, but their pride and joy were their two children. They led by example to instill a hard work ethic, the importance of education, family values and giving back to the community.

Angela retired after 25 years at Springfield High School so she could volunteer and travel with her husband, then an executive vice president of ARCO Chemical Company. They traveled extensively for business and pleasure.

When not traveling, Angela volunteered as a docent for elementary age children at the Andrew Wyeth Museum. Later, they were active in the Philadelphia arts and civic communities through her husband’s job as executive vice president of community relations for ARCO Chemical.

They resided in Glen Mills, Pennsylvania; Margate, New Jersey; and Jupiter, Florida during their retirement and were members of Concord, Frenchman’s Creek and Ballen Isles country clubs as well as the Ocean City Yacht Club in New Jersey.

Angela and Bob were lifelong dog lovers, raising collies and later Pomeranians. Angela rescued 2 Poms in her years at Atria who provided her much joy as her health declined.

While disease robbed Angela of many things in her last years, she never lost her love of her family and dogs, being very well dressed (for which she was nicknamed “The Queen” at Atria), music, reading and humor.

The family is deeply appreciative of the wonderful care which she received from her longtime caregiver, Annette Anson-Buchanan and her friend and nurse, Christine Stewart Butler.

Services will be private. A celebration of Angela’s life will be announced at a later date.