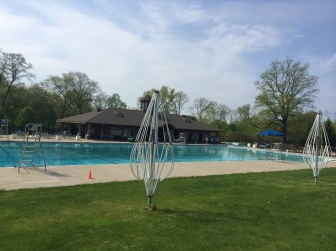 New Canaan officials on Tuesday approved a plan to install water heaters for the upcoming season at Waveny Pool — a widely anticipated amenity at the popular facility.

Most of the 100 non-residents who buy pool passes at Waveny, just over the Darien-New Canaan border, are from Darien.

The Board of Selectmen by a 3-0 vote approved a $15,000 contract between the New Canaan Department of Public Works and Danbury-based Mitchell Gas to install two 1,000-gallon tanks to serve the main pool at Waveny, and a 250-gallon tank for the kiddie pool, according to Joe Zagarenski, senior engineer with the DPW.

The funds had been part of an allowance that came with the Waveny Pool’s original approval, he said.

The heaters are to be delivered this week and the water should be heated in time for the Waveny Pool’s Memorial Day weekend opening, Recreation Director Steve Benko said during the selectmen’s regular meeting, held at Town Hall.

Selectman Nick Williams called Waveny Pool a “real success story” and noted that Benko and the Park & Recreation Commission had run with a suggestion from the selectmen to re-examine its original economic model.

“A few years ago I think that pool was losing money hand over fist,” Williams said, a situation that turned around when a plan emerged to allow nonresidents to put in for a limited number of passes, at far higher fees than locals pay (they’re mostly Darienites).

“I know there were some folks in town, including people in town government today, who were opposed to it—‘God forbid that we let non-New Canaan people use the pool—but kudos to you and Park & Rec, because that has put this pool on a stable financial track and that is a story that I don’t think has gotten out there.”

First Selectman Rob Mallozzi noted that Benko, Park & Rec Chairman Sally Campbell and then-member Rick Kilbride were especially responsive to the selectmen’s suggestion to look at how the Waveny Pool—now self-sustaining and with a healthy capital surplus (see pass fees here) that’s used to re-invest in the facility—had been operating.

In the past, opening for Memorial Day “had been a burden” to recreation, but now “with a heater, it will be a home run,” Mallozzi said.

Selectman Beth Jones asked just where the tanks would be buried and whether the contract with Mitchell includes excavation (yes it does).

Benko said the two large tanks would be installed next to the pump house, and that the kiddie pool’s tank would go behind a garbage dumpster at one end of the main parking lot behind Waveny Pool.

Editor’s note: The article above and the one below originally were published by NewCanaanite.com. They are republished here with permission.

Most of the 100 nonresident passes for Waveny Pool are sold to Darien families, parks officials said.

Faced with a potential shortfall in revenue to keep the self-sustaining facility in the black, officials opted to sell family passes at $1,000 each to out-of-towners for this season (New Canaan families pay $475).

“I’d be curious on the lottery winners how many are from Darien?” Konspore said at Wednesday’s regular monthly meeting for the group raised the question of just where nonresident permit applicants are coming from—some 250 signed up for a waiting list and 100 were selected by lottery.

Konspore also asked whether it might be possible down the road to create a relationship with Darien where the shoreline town opened up its beaches to New Canaanites.

“Reciprocity would be a wonderful thing, even though their beaches are closed a lot,” Recreation Department Office Manager Bea Watkins said. Darien charges non-residents $75 per visit to a town beach. There is no season pass for non-residents.

Meanwhile, Recreation Director Steve Benko said he and department staffers are working diligently to get the pool ready for its Memorial Day weekend opening — no easy task with the late spring.

“It’s just been a cold spring. For the first time in 13 years, we had a hard time getting the water to clear up,” Benko said, adding that it’s been a matter of water temperature and that the water is now clear.

Last year, New Canaan sold about 720 resident passes for the pool, and an additional 100 to nonresidents (to make sure there was enough money for capital and operating costs there).

As of Wednesday, the town would need to sell an additional 300-plus passes to get to last year’s levels, which parks commissioners said likely would come in as the warmer weather sustains and residents start thinking more about outdoor swimming.