Nearly half of all pregnant women at Yale-New Haven Health’s network of hospitals have tested positive COVID-19, the organization’s officials said Wednesday at an online news conference.

—Expect about four more days of a “plateau” of  COVID-19 cases in hospitals and then a decline over four to six weeks, one hospital official predicted.

—Borgstrom said at the end of 2021, the health system had 531 COVID-19-positive hospitalize patients. On Wednesday, Jan. 12, there were 738. The hospital network includes Greenwich Hospital, Bridgeport Hospital and Yale New Haven Hospital. 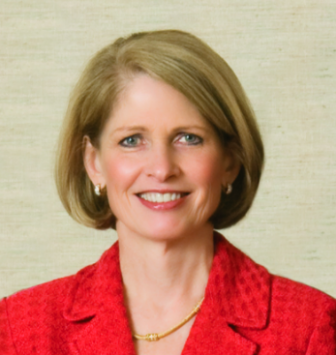 “We ask that pregnant women be more comfortable and receptive to being vaccinated for their health, the health of their babies and the health of people around them,” she said.

Borgstrom said Dr. Heather Lipkind, who is with the Yale School of Medicine and a practicing physician in the system, was the lead author of a author of a recently published study that looked at more than 46,000 births, including 10,000 of mothers who were vaccinated during pregnancy.

“The research she reported showed there was no greater risk of delivering babies prematurely or having a low birth weight if people are vaccinated. The vaccine is safe,” she said.

“In fact, people who are unvaccinated and have contracted COVID have been delivering early. There is clear data to show that early delivery/low birth weight have other impacts on infant development.”

Borgstrom said staff are also frustrated because the vaccine had been available for a year and the data is clear that for people who are vaccinated and boosted the disease has had far less impact and requires less intervention.

She said that during morning huddles at each of the delivery networks they learn of incidents.

“It’s very unusual not to have a morning report (of an) employee reporting to occupational health that they have been assaulted by a patient,” she said, adding that at a testing site in Fairfield a fight erupted after someone accused another of cutting in line for testing.

“We understand that families are frustrated wen they can’t visit. We understand that beds are tight and when people are in the emergency department for an extended period of time that’s a place they want to be waiting,” she continued.

”When we were rounding [walking by hospital wards], there was a patient who was very loud and very unkind in describing how awful it was that he had to be held in the emergency department […]”

At another point, Borgstom said:

“We know people are feeling overwhelmed by the length of the pandemic, and are we in an endemic situation where we are living with it? But people are really tired. Civility and kindness will help reduce the sense of frustration.”

“We have learned a lot in how to care for patients. We’re starting to see patients with shorter lengths of stay, particularly those patients with milder break through cases,” he said. 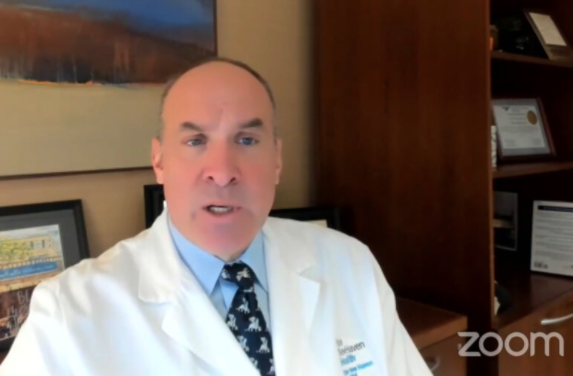 “In total, in the first wave back in spring 2020, 22% of patients required ICU [intensive care unit] care. Today that number is just 14%. That’s a real improvement. It’s a testament to the vaccines and to the clinical care protocols that have resulted in many fewer needing the ICU. And the percentage of patients on ventilators in April of the first wave was 17%, now it is 8% across system.”

“It’s still a lot of patients. And while we are better at taking care of patients, and while the illness is less severe particularly when boosted, we still need to keep our guard up.”

Balcezak said much has been learned since the beginning of the pandemic.

“We’ve gotten better and knowing how to prevent the spread, knowing how to care for patients. We have gained a lot of tools, most importantly the vaccines,” Balcezak said. “But still we are not there yet.”

The health system has begun mandating a booster for staff; they are required to be boosted by March, he said.

“This is a step we do not take lightly,” Balcezak said. “We are watching our numbers carefully and when we feel we can go back to allowing visitors, we will do so.”

Omicron Wave Becoming More of a Plateau in CT

Asked whether Connecticut had reached a peak with Omicron, Balcezak said he believed that state was at a plateau.

“In the first wave in March 2020 and then in April, we saw a peak and steep decline,” he said.

“Every subsequent wave we’ve seen a much gentler decline and a larger shoulder or even plateau. In the coming five to six days we’ll begin to see an ease up of total number of patients in hospital, but it will be a slow decline over the next four to six weeks.”

— This article is adapted from a report in GreenwichFreePress.com.