Katharine Gordon Wilson of Vero Beach, Fl. and formerly Darien, died peacefully on July 27 from complications from a stroke. 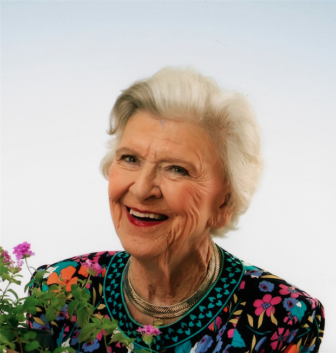 Katharine Wilson died July 27. Her funeral is scheduled for Sept. 28.

Born in 1920, at the base of Mount Hood, Oregon, she was one of six children of Colin John Gordon and Katharine Forbes Jones.

Kate was a past Trustee of Bennett College and Wee Burn Country Club and a long time member of Riomar Country Club, US Woman’s Seniors and Westchester Fairfield Golf Association.

She was a determined and avid athlete and excelled in golf, tennis, and trapshooting. Her passion for the outdoors, gardening and healthy living were an inspiration to all.

Known as KK to her 10 grandchildren and 13 great grandchildren, she was a guiding force to her large family and beloved by many.

A celebration of her life will be held at 11 a.m., Sept. 28 at St. Luke’s Church in Darien. In lieu of flowers, donations in her memory can be made to Harbor Branch Oceanographic Institute or Person to Person.