Beyond that, he couldn’t say much. What he did say didn’t sound very hopeful.

“We are working with mall ownership on the sale,” he said. “That’s as much as I can go into on that.”

Theresa Dell, chair of the Planning Board, introduced Madden, who spoke for less than five minutes.

“I am extremely limited on what I can talk about,” he said, noting that Article 18, Section 40-64(a) Prohibited Activities dictated he could not disclose any information, beyond what is generally available to the public.

The sale would not include Macy’s or the Bowtie Cinemas Landmark 9.

Who Owns the Mall

Ownership of the mall complex is, well, complex:

Madden, in addition to serving as the city’s economic development director, is executive director of the URC.

He said the URC’s board authorized him to move forward with appraisals of the parts of the mall the URC owns.

“We want the city to be as helpful as possible to anybody who wants to purchase it,” he said. 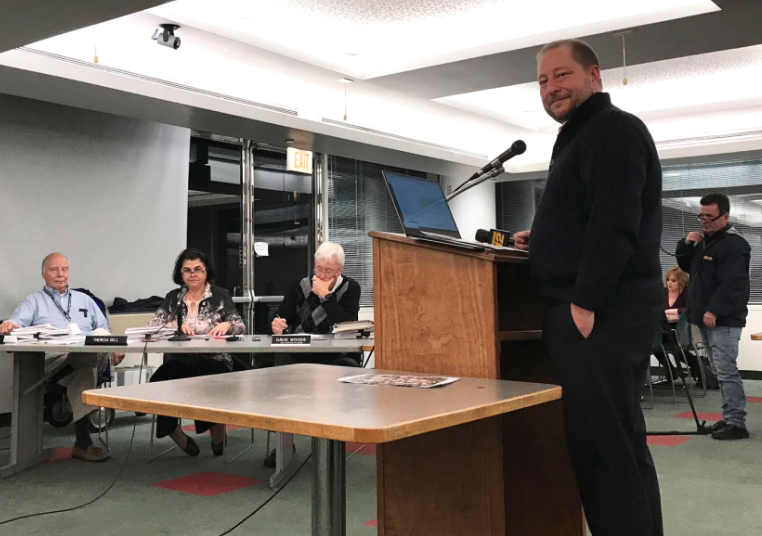 Thomas Madden, Stamford’s director of economic development, told the City’s Planning Board he was extremely limited on what he could share about the future of Stamford Town Center, which is for sale.

Dell, the Planning Board chair asked, “Are you hoping to keep it as a retail center or are you keeping all options open?”

“It really comes down to the market,” Madden said, adding that, as part of the offering, the city and all its boards would work with anybody who purchases the mall.

“The development rights of the mall are actually greater than what what was built on the site. A lot of it was constrained by the number of parking spots.” – Thomas Madden, Stamford director of economic development

Bill Levin, an alternate member of the Planning Board, asked if lease holders will have any sway.

“I can’t answer that,” Madden replied.

Madden explained that the URC is a separate body from the city government.

“We are the 501(c)3 economic development corporation,” he said. “That allows for us, under specific rights from the state, to do eminent domain.”

He said the URC started taking properties back in 1978 to make a deal. The mall opened in 1982. He said the majority of downtown Stamford was planned and built through the URC, so it maintains ownership of some of the properties in the downtown area.

“We actually found out the URC, not the city of Stamford, owns Veterans Park,” he said.

Before the mall opened in 1982, the city government agreed to convert Bedford and Summer Streets to one-way. The idea was for the mall to be a destination for visitors traveling by car. Prior to becoming one-way Bedford Street, now dominated by restaurants and bars, was a vibrant shopping district.

The mall was very popular when it opened, though it was criticized for not being pedestrian friendly. The far south end of the mall, which housed JC Penney and Filene’s, was demolished in 2006.

It was replaced by a pedestrian-oriented exterior featuring retail stores and restaurants to connect pedestrians to the mall.  In 2008 a two story Barns & Noble Bookstore opened and remains an anchor, in addition to Macy’s and Saks Off 5th.

Forever 21 is in business, but the company has filed for bankruptcy.

Levin asked what the city’s Master Plan called for.  “Is there any way to provide input or is it a big secret?”

“Up until two years ago the mall was seen as going to be there for a long time,” Woods said. “That was one of the bedrocks of downtown – the mall. That changed with a number of things — two malls in Norwalk and the way shopping has changed radically in the last two to four years.”

Dell said, “We can’t tell any developer what to do with his property — to keep it as a commercial development or turn it into a high rise. […] It’s their prerogative to do what they want with their property. Then they come before us and we can decide if it’s too aggressive, too invasive or doesn’t meet the Master Plan.”

“Could we amend the Master Plan, to say in certain areas what can be put in?” Levin asked. “It sounds like it’s not very specific, and what if someone wants to build an office building there and we wind up with no commercial downtown?”

“That would help Lord & Taylor [north of downtown], and they need a lot of help too,” Woods said.

“With the way the market has changed, malls are dead. So let’s find other uses for it.” – David Woods, Stamford deputy director of planning

“How is it that Norwalk is just opening a mall with similar characteristics?” asked Planning Board member Michael Bucchino.

“They’re not doing it with all that success,” Woods said. “They’re worried, given the changes and that they’ve bet the farm on […] But there’s a newness factor. It’s brand new, but it’s looking distressed, quite frankly.”