The late Frank Valente, a rifleman who landed on Normandy Beach and a recipient of two Purple Hearts and several Distinguished Service medals, will be honored in a ceremony Sunday by the Darien Monuments and Ceremonies Commission. 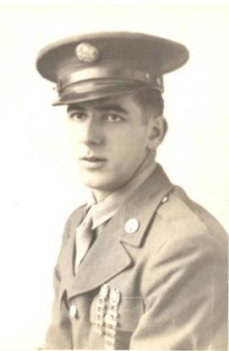 Valente will be the latest recipient of the Darien Veteran Street Sign program, in which a town road receives an extra street sign and is given the honorary name of a town veteran who also served Darien as a civilian.

The new street sign with Valente’s name will be unveiled on William Street during a 12 noon ceremony on Sunday May 23.

Frank Valente bravely served as a Private, First Class in the United States Army during World War II, joining the Army in July 1943.

Frank served in the 175th Infantry as a rifleman. His company landed June 6, 1944 on Normandy Beach to liberate France. Frank fought valiantly for his country, a recipient of two Purple Hearts and several Distinguished Service medals during his years in the army.

Valente received an honorable discharge in November 1945. Upon his return from the war, he came home to live in and serve his hometown of Darien.

Along with his wife Josephine (nee Casolo), Frank raised their five children in Noroton Heights. He was tirelessly involved with many community organizations, including the Piedmont Associates, Springdale Athletic Association, Knights of Columbus, Darien VFW, DAV (Disabled American Veterans), Association of the Purple Heart, and the Darien Old Timers.

In addition, Frank was a Darien special police officer for 30 years. He worked at St. Thomas More Church from 1990 to 2001, and also spent a great deal of time working at Springdale Florist.

In his leisure time, Frank was an avid gardener and enjoyed playing golf and bowling. Frank served as the Grand Marshal of the Darien Memorial Day Parade in 2008, and we are pleased to honor him with a Darien Street sign named in his honor.

This is the fourth sign renamed in a veteran’s honor. A link to the application for Wartime Veterans Street Sign nominations is available on the Town website, and paper copies are available at the Darien Town Hall.

Residents are encouraged to nominate deserving wartime veterans. Along with the application, proof of service, awards and service to the town are required.

The program was spearheaded by Lucy Marshall Berry, Middlesex Middle School American history teacher. The program, begun in 2019, was designed to honor those who actively served our country during wartime and made meaningful contributions to the community of Darien.

Ms. Berry was raised in Darien and attended the Darien schools. It is her hope to raise awareness of the sacrifices made by Darien residents and start conversations among families and residents about the importance of service to the community.