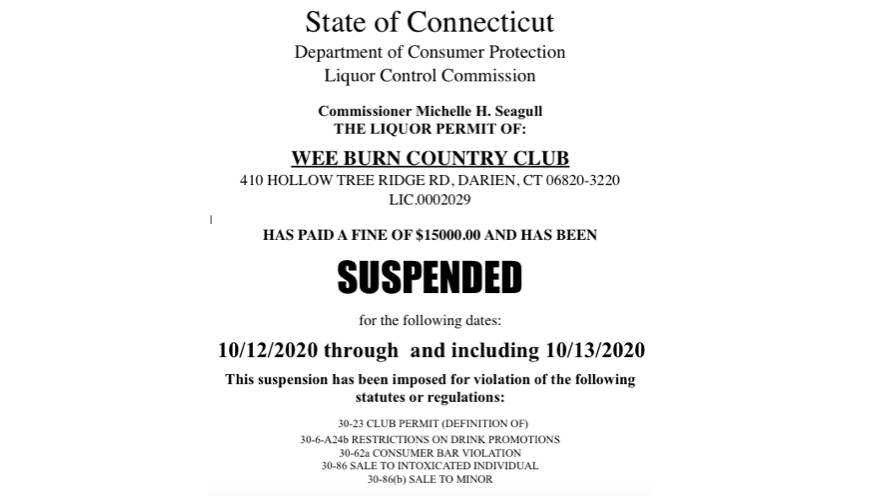 Wee Burn Country Club served alcohol to a minor and violated four other liquor laws or regulations, the state Liquor Commission has determined, so the commission fined the club $15,000 for that and suspended liquor sales for two days in October.

The commission’s public notice about the suspension has few details about the violations it says the club committed, but, in addition to “sale to minor,” lists them as “club permit,” “restrictions on drink promotions,” “consumer bar violation” and “sale to intoxicated individuals.”

The commission’s website didn’t give any details about the sale to a minor, but Darien police last August accused a Darien man of providing liquor to two “minors” — 19-year-old caddies, in part at the Wee Burn club bar.

Was It This Case of Minors Allegedly Drinking at Wee Burn?

The following account, from an Aug. 19, 2019 Darienite.com article, comes from police and includes accusations not proven in court about the drinking incident, which allegedly occurred June 25:

The caddie, a 19-year-old Stamford man, asked for a beer, but the Darien man got him a vodka. The caddie drove home, but on the way crashed his vehicle and was arrested on a charge of driving while under the influence.

The Darien man hadn’t offered the caddie an alternate way of getting home and the teenager had gotten into his vehicle against the wishes of the other caddie.

The Connecticut Judicial Branch website lists no convictions or continued court hearings for the Darien man, and Darienite.com won’t publish his name in this article. 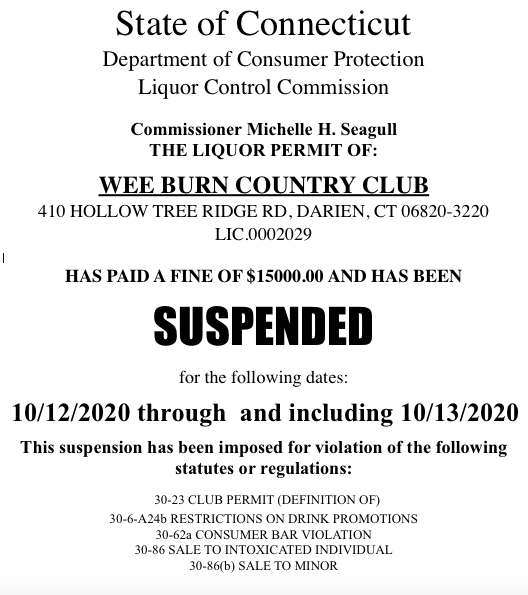 The only document the state Liquor Commission released looks like a notice meant to be posted.