Police said they found it difficult to wake a 31-year-old woman who was found sleeping at the wheel of her parked car with the engine running Tuesday night, March 2.

When her blood-alcohol content was tested later, according to police, the first test showed she had just above three times the legal amount for driving; the second result was just below three times the limit.

An officer on patrol saw the car at 8:48 p.m. in the Darien Tennis Club parking lot at 98 Old Kings Hwy. North. Looking through a car window, the officer saw Tyesha Bember of Bridgeport slumped over the steering wheel, motionless. 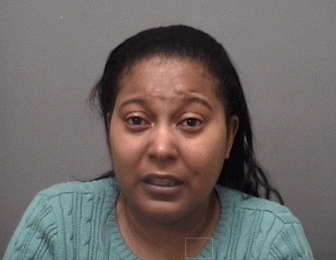 Arrest photo of Tyesha Bember, 31, charged on March 2, 2021 with driving while under the influence.

According to the police announcement, the officer “had to bang on the window several times with substantial force to rouse her.”

When Bember finally did wake up, she appeared confused, and at first didn’t respond to the officers, who were telling her to open the door. When she spoke, she was incoherent and confused when asked basic questions. And she smelled of alcohol.

Police did not say why her tests took place more than five hours after they said she was found in the parking lot.

Bember, a resident of Pearl Harbor Street in Bridgeport, was later released on $500 bond. She is scheduled to appear April 9 in state Superior Court in Stamford.