UPDATED, Friday, 11:16 a.m. — Michael Burke, a Democratic candidate for Board of Selectmen in the last election, has told the board he’d accept a seat on the board if offered.

He added that with first selectman candidate Tara Ochman declining to take a seat on the board didn’t mean that he was automatically elected to the seat. With Ochman declining, the decision to fill the seat simply went to the new Board of Selectmen. The seat must be held by a Democrat, in accordance with state election law on minority-party representation on a town board.

Ochman was one of the top five vote-getters in the election, entitling her to take a seat, even though she lost the first selectman race to Republican candidate Monica McNally.

“According to town attorney Wayne Fox and other election law experts, the seat was not mine to take.  Rather, Ms. Ochman’s decision to remain on the Board of Education, created a vacancy.

“The vacancy is to be filled by the provisions of Connecticut General Statute 9-222. That statute provides that the Board of Selectmen shall fill the vacancy within 30 days. If they fail to do so within that period, other procedures identified in the statute would be undertaken.

“[T]he vacancy must be filled by a Democrat.  Past practice in Darien has been to fill such vacant posts whether on the Board of Education or the Board of Selectmen with the nominees of the respective party.

Original article [with corrections], Thursday, 9:55 p.m.: Original headline: Ochman Stays on Board of Ed, Board of Selectmen Now Searching for a Democrat

[CORRECTION: The original version of the article incorrectly said Burke would automatically get the seat after Ochman declined it.]

After the Nov. 2 election, some political maneuvering on the Board of Education has resulted in Tara Ochman changing her mind — she’ll stay another year to finish her term on the school board.

The four other Board of Selectmen candidates in the election, except for Michael Burke, who came in sixth and for that reason didn’t win a seat. 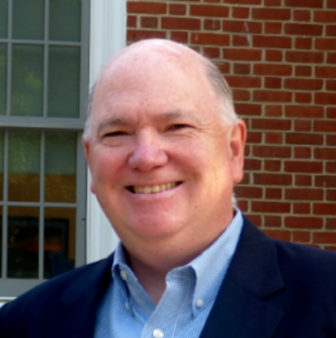 Michael Burke, still a Democratic candidate for Board of Selectmen (photo contributed from a 2020 campaign)

Newly elected First Selectman Monica McNally issued a news release Thursday telling town residents that the board is searching for a Democrat to fill the vacant fifth seat on the board.

Current members of the board, including McNally, are her fellow Republicans, Marcy Minnick and Jon Zagrodzky, and Sarah Neumann, a Democrat. Burke had run for the office and was among the five top candidates (as least as of when Ochman decided not to take a seat on that board) but didn’t take his seat.

Maneuvering on the Board of Education

Tara Ochman had originally announced after the election that she would neither continue sitting on the Board of Education nor take the seat on the Board of Selectman that she was entitled to by virtue of the votes she received. (Those votes weren’t enough to win First Selectman, but under town election rules, they get counted alongside other candidates for selectman.) 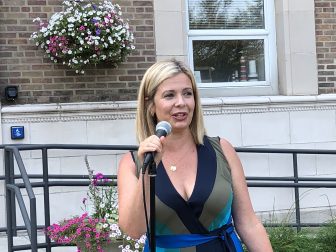 Tara Ochman during the campaign

The Darien Democratic Town Committee endorsed Stacey Tie, who had run (with Julie Best) for open seats on the Board of Education. Republicans David Brown and Tara Wurm took two of the three open seats in the election, and Best won the third. Tie, in fourth place, had lost out.

The Democratic Town Committee had met Saturday to endorse Tie for the position that was about to become vacant, Democratic Town Chairman David Bayne wrote in a letter Sunday to David Dineen, chairman of the Board of Education. 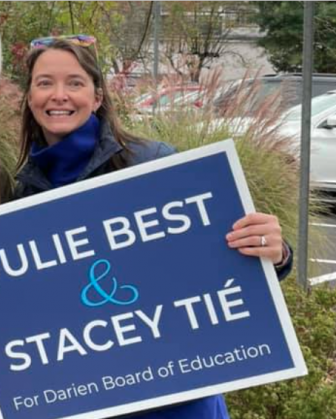 Stacey Tie in a campaign photo

“As a candidate in last week’s election, Ms. Tié demonstrated that thousands of Darien voters wish for her to serve on the Board of Education,” Bayne wrote. “We, therefore, request that the Board of Education honor the wishes of those voters and choose Ms. Tié to fill out the remainder of Ms. Ochman’s term.” Tie announced that she was willing to serve out the term.

When Ochman said she would leave the Board of Education, the decision on who her replacement would be fell to that board, which had to choose a Democrat — but with a majority of Republicans potentially rejecting the request for Tie.

Late Monday afternoon, Ochman announced on Facebook that she was changing her mind and would keep her seat on the board:

“I understand that this is a departure from my announcement last week to resign from serving in town government, unfortunately politics has gotten in the way of governing.

“It has been an honor to serve on the Board of Education for the past five years, and today I am announcing that I will continue my service to the children and residents of Darien as a member of the Darien Board of Education.

“We learned this weekend, that there have been discussions within the Board of Education that it may break with tradition and reject the DTC’s nomination of Stacey Tie for the BOE, should I have carried through with my decision to vacate my seat.

“As you know Stacey was a candidate for the BOE in last week’s election and earned almost 3,000 votes. She is well-qualified to serve on the Darien BOE and would be a welcome new voice for and of the community.

“Darien needs to get back to work, to the business of governing and not politics. I look forward to proudly representing the needs our children and community on the the Board of Education.”

McNally’s Announcement on the Search for a Fifth Selectman

Recognizing this responsibility, the Board welcomes anyone interested in serving the community as a Selectman to complete the Common Application found on the Town of Darien website at www.darienct.gov/volunteer and send it directly to loleary@darienct.gov. Interviews will be held virtually next week.

Today is Veterans’ Day. As we reflect on the patriotism of the men and women who served, and are serving, in the armed forces, please take a moment to consider this opportunity to serve your own community. Thank you.