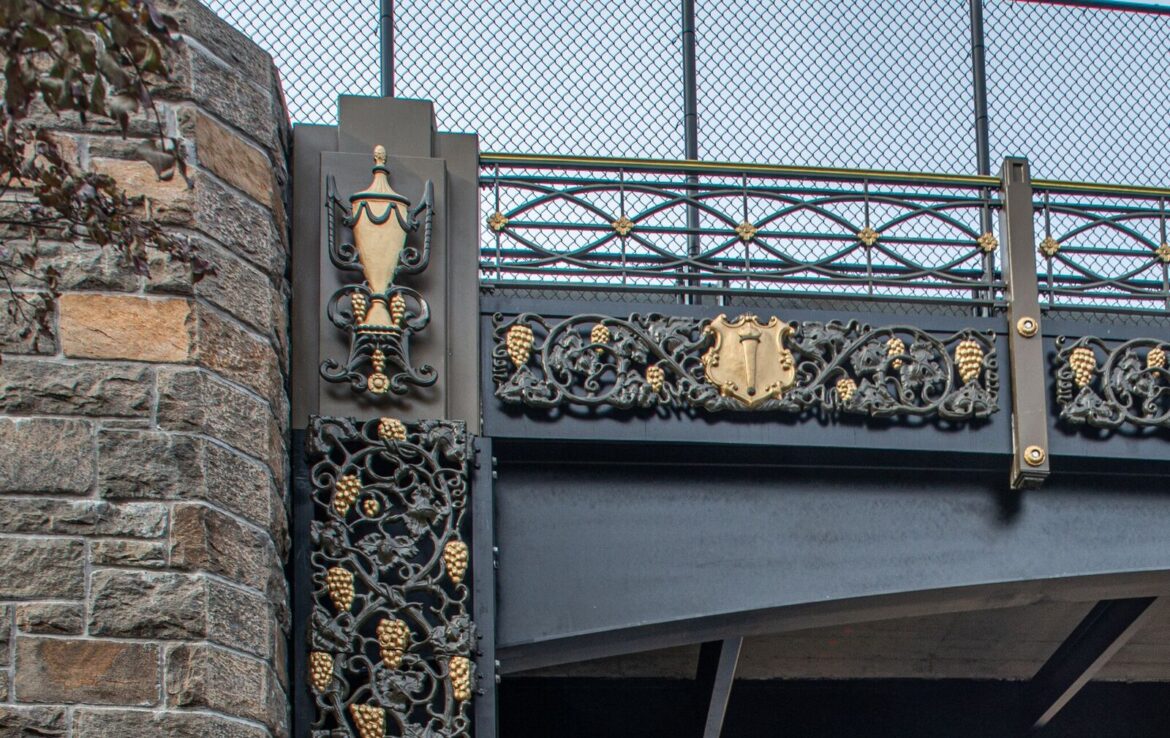 Closer view of the restored black and gold metalwork on the Lake Avenue Bridge.

The recent rebuilding of the Lake Avenue Bridge over the Merritt Parkway in Greenwich has earned Connecticut a new award.

A state agency, nonprofit group and business which all cooperated on the project to rebuild the bridge, part of the Merritt Parkway National Scenic Byway, won the 2020 Byway Organization’s Leveraging Services Award bestowed by the National Scenic Byway Foundation project.

Cited for their collaboration were the Connecticut Department of Transportation, the Merritt Parkway Conservancy, and contractor Mohawk Northeast Inc.

Maintaining and repairing scenic byways, which are both transportation corridors and tourism and quality of life assets, often generate conflicts between competing missions of safety, efficiency and aesthetic stewardship among agencies responsible for their immediate upkeep and the communities who use them.

“The next two generations of drivers on the Merritt will live with the way we treat it today,” Conservancy executive director Wes Haynes wrote to the foundation in appreciation for the award. 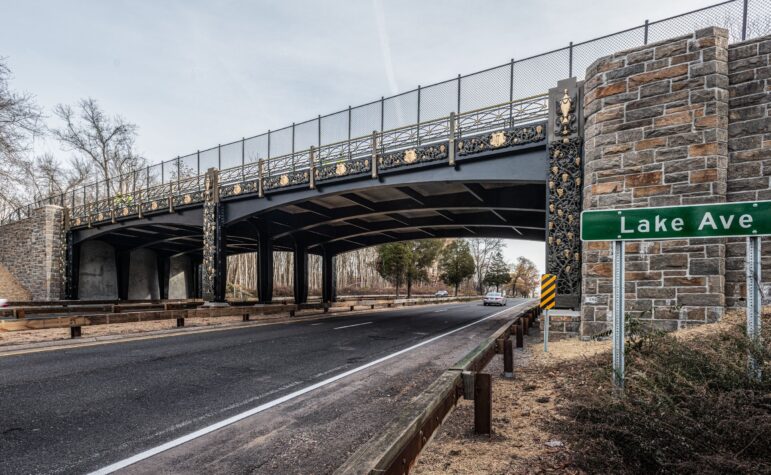 The Lake Avenue Bridge over the Merritt Parkway in Greenwich.

“Returning this bridge to structural soundness and the way it looked when it was built in 1940 demonstrates that goals of safety, efficiency and aesthetics can be met through collaboration when everyone pulls in the same direction.”

The project required taking the bridge out of service to completely replace the structural steel. It was accomplished under great time pressure to minimize disrupting the parkway’s heavy volume of weekday traffic moving below it — estimated around 70,000 vehicles per day — and detouring local school bus routes 8.5-miles while the bridge was out.

In addition, the restoration needs of the ornamental ironwork were open-ended when the project began and could not be determined until it was carefully removed from the rusted structure, a process that posed its own uncertainties. 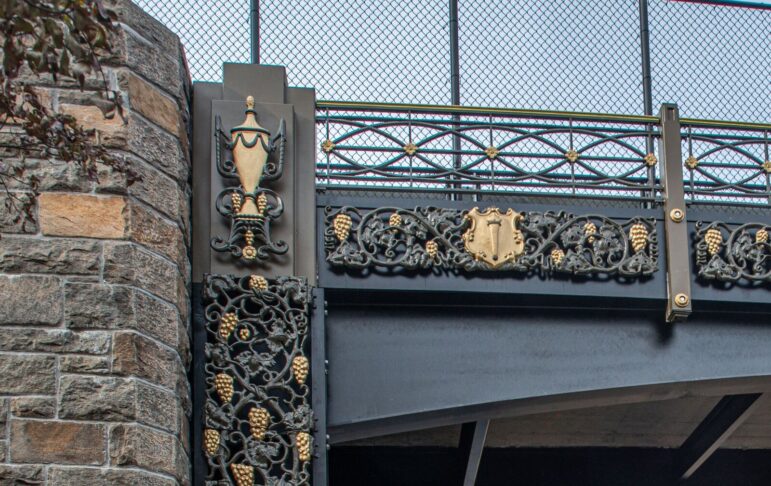 Closer view of the restored black and gold metalwork on the Lake Avenue Bridge.

Nonetheless, the project was completed ahead of schedule, on budget, and to positive community reception through the strong collaboration of the Transportation Department, which designed and administered the project; Mohawk Northeast, which brought the right skills to the work; and the Merritt Parkway Conservancy which closely advised on the restoration process and kept the community apprised progress.

The project and award came a decade since the Merritt was recognized as an endangered historic place, resulting from the absence of effective collaboration between CT DOT and the Conservancy in earlier bridge repairs. 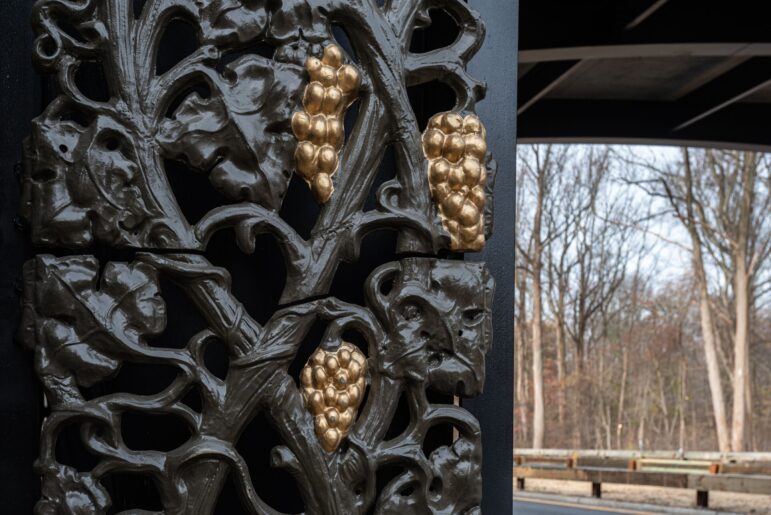 The Merritt Parkway became a National Scenic Byway in 1996.

The National Scenic Byway Foundation is the national voice of Scenic Byways and Roads; byway experts who work to strengthen byways, advocate for byway funding, and promote increased awareness of byways throughout the nation.

The Merritt Parkway Conservancy will represent those honored at the award presentation at the Heartland Byway Conference scheduled for Oct. 27 to 29, 2020 in Leavenworth, Kansas. 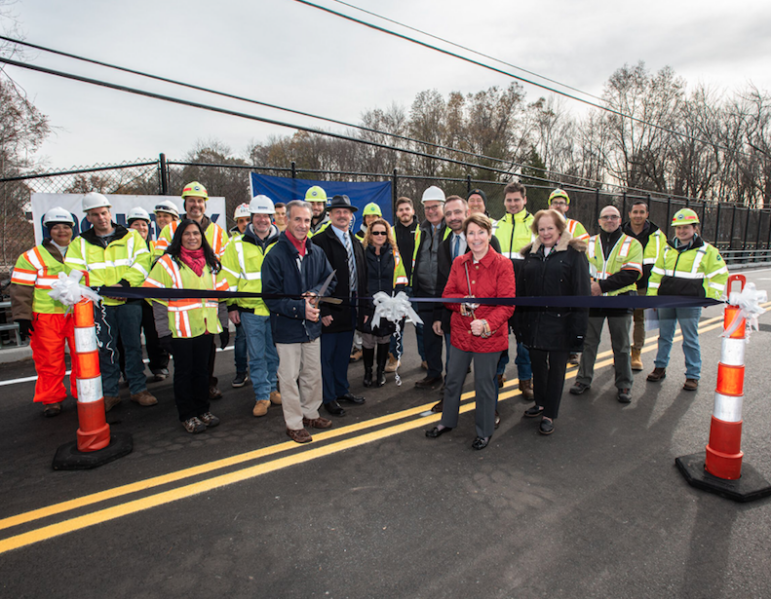 At the reopening of the bridge

The Conservancy also engages citizens with community conversations on the parkway’s history and future and supports the Merritt Parkway Museum in Stratford featuring archival materials, a video presentation that describes the the parkway’s construction, and a large-scale map of the Merritt highlighting its historic built environment and nearby attractions. The Conservancy