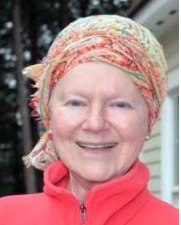 Mary Hyde Jenkins Ryan of Clarendon, Vt., died peacefully on Dec. 5, surrounded by her husband and family. She was 69 years old.

Sailing adventures on Long Island Sound and along the New England coast were a significant part of Hyde’s early years. Hyde credited her family with having taught her to watch and listen carefully to the sea, the sky and the world around her.

Hyde attended Tokeneke and Low-Heywood schools, Garland Junior College and Castleton College, from which she received her B.A. in fine arts. She studied art in Italy and London, and worked for F. Schumacher Fabrics in New York before settling in Vermont, the place she called home for over 45 years.

— an obituary from Tossing Funeral Home

Her artistic bent and natural abilities led her from design work at Rutland House to the establishing of her own business, Hyde Ryan Design. She had a successful career in design that included projects in New York, Connecticut, Florida, Massachusetts, Vermont, the Netherlands, England and China.

Hyde met her devoted husband and the love of her life, TR Ryan, and they married in 1986.

She was a nurturer and guiding force for her entire family, especially for the children, Ali, Sean and Brady, whom she was so instrumental in helping to raise.

Hyde was a gifted listener and gentle advisor and she never gave up on anyone. She had a positive, loving and lasting impact on anyone who was lucky enough to know her. She was also a protector of all creatures.

She had a vast knowledge of history and culture, and a great appreciation for words and language. She loved music and sang in many choral events at Grace Congregational Church, with the Rutland Area Chorus, Rutland Chorale and Castleton Festival Chorus.

Hyde loved art in all its forms and saw the inner beauty in people and objects. Hyde found particular joy in caring for and riding her horses: Fionn, Bri and Madeira.

She is survived by her husband, TR Ryan; her brother, Jonathan W. Jenkins; her niece, Alexandra “Ali” Jenkins, her husband, Michael, and their son, Nathanial; Sean Ryan, his wife, Miranda, and Hyde’s grandson, Andrew; Brady Ryan and his wife, Robin, and their children, Jack and Daisy.

A celebration of Hyde’s life will be held at the Grace Congregational Church on Saturday, Jan. 6, 2018, at 2 p.m. In lieu of flowers, donations can be made to the Lucy Mackenzie Humane Society or Green Mountain Horse Association.

Arrangements are under the direction of Tossing Funeral Home in Rutland.