Katherine McLachlan Reilly of New Canaan passed away at home on Sept. 9, 2021. She was 98. 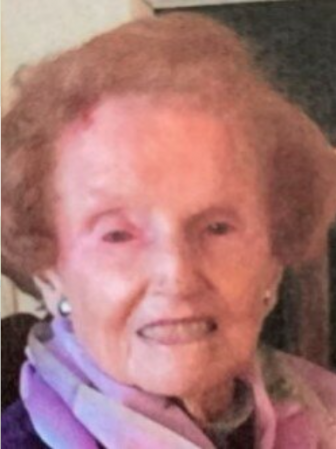 Kay was born April 2, 1923 in Danbury, the daughter of George and Katherine McLachlan. She graduated high school from the Convent of the Sacred Heart in Noroton and from Rosemont College.

She married Lawrence H. Reilly Jr., and they raised their family in Darien starting in 1954. Kay and Larry moved to New Canaan in 1994.

The date of Kay’s passing is also the date of her wedding anniversary.

Kay had a charm and humor about her along with a joyful knack for bringing people together and establishing meaningful friendships. On into her 90s, she was still making new friends, especially through St. Aloysius Church and Staying Put in New Canaan.

Kay was predeceased by her husband of 58 years and their second child, George M. Reilly, who lived just six months.

Kay is survived by her children: Lawrence; George and George’s wife Lynn; Katherine (Kit), and Gregory; her eight grandchildren — Neil and his wife Catherine, Timothy and his wife Kelly, Peter and his wife Kirstin, Matthew, Christopher, Gregory Jr., Douglas, and Allison; and by her four great-grandchildren — Henry, Connor, Declan and Serena.

A funeral Mass will be celebrated at St. Aloysius Church in New Canaan on Wednesday, Sept. 15 at 11 a.m. A reception will follow at the Convent of St. Birgitta in Darien.

In lieu of flowers, contributions may be made to the Convent of Birgitta, 4 Runkenhage Road, Darien, CT 06820.