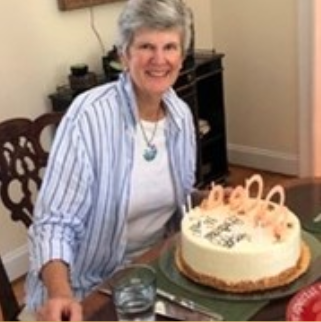 Karen Kolseth Cashman, 76, a resident of Stonington, died peacefully on Nov. 9, after being diagnosed with peritoneal cancer in 2018.

Karen was born in Washington, D.C. on Sept. 8, 1943 and was educated at Greenwich Academy and Mount Vernon College.

Karen was an ambitious and resourceful mother, racket sports enthusiast and champion, horsewoman, artist, hostess, homemaker and lover of animals, people and nature. She was competitive by nature yet always had a smile on her face.

She practiced and taught dressage and ran Hidden Meadow Bed & Breakfast in Lyme.

Karen was an elected artist member of both the Salmagundi Club in New York City and Lyme Art Association in Lyme. She attended the Lyme Art Academy and exhibited oil paintings in Connecticut and Blue Hill, Maine.

Karen played tennis and paddle from her younger years and into her seventies at clubs and with the United States Tennis Association. She was a keeper of horses, cats and dogs, most recently two german shepherds. Karen’s diverse interests were supported by her husband of 21 years, Lee Edward Cashman.

Karen was formerly married to James Pierre Brossard, who died in 1994.

Karen is survived by her husband Lee Cashman, her sister Sandra Brinckerhoff, her four daughters: Lucie Brossard, Anne Van Praagh, Nancy Brossard Parent and Katie Nazarian, and a son and daughter through marriage, David Cashman and Lesley Cashman-Peck. Karen was known and loved by eleven grandchildren who called her “Mimi.”

In lieu of flowers, a donation to the Smilow Cancer Hospital and Yale Cancer Center “Closer to Free” Fund or the United States Tennis Association Foundation would be sincerely appreciated.

— This obituary was previously published by the Darien Times. Condolence messages may be left on the Fulton-Theroux Funeral Service website.